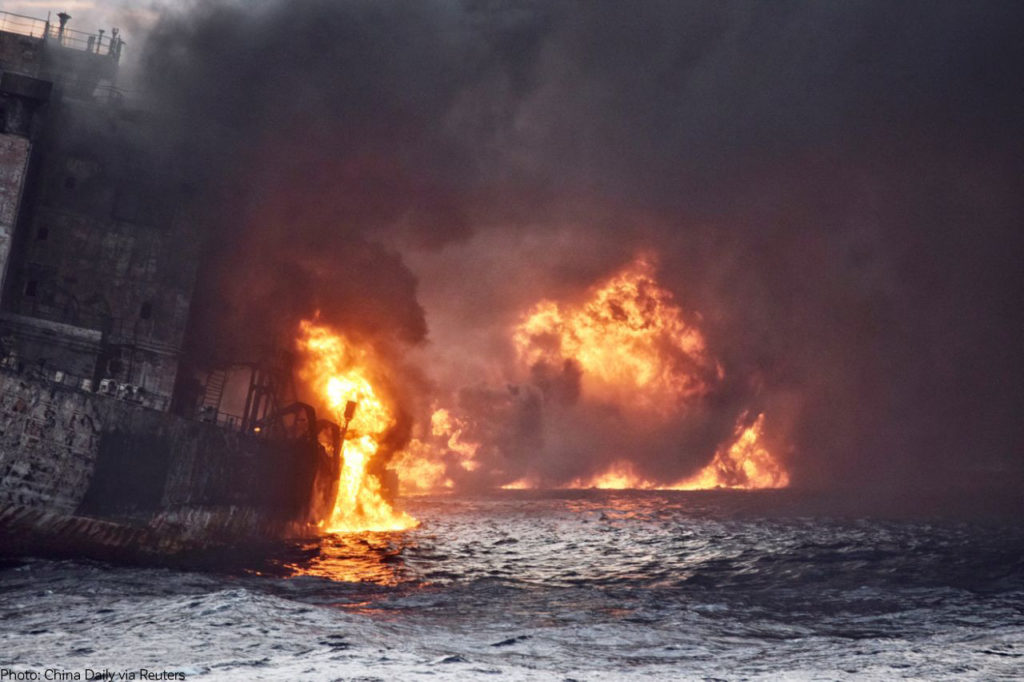 Spills are an ocean away — until they’re not

Leaving an ocean of fire, and the largest oil spill since 1991 in its wake, MV Sanchi exploded and then sank to the bottom of the Pacific on January 14. As state resources from two of Asia’s most powerful countries stood by — unable to respond or contain the disaster — British Columbians got a firsthand look at just how easy it is to sink an oil tanker.

At least that would have been the case if media gave it more than cursory coverage.

I’m trying not to bash the press because I know many of them are doing the best job they can in difficult circumstances. However when it comes to Kinder Morgan, I’m concerned their institutional bias gets in the way of good coverage.

If everything you knew about Kinder Morgan came from Canada’s government or major dailies this is how you might understand the Kinder Morgan story: Trans Mountain expansion is a politically controversial project with ramifications for Alberta’s economy that will ultimately be safer than delivering oil by rail. Despite opposition from the majority of British Columbians and First Nations, the project remains in the ‘National Interest.’

What you won’t hear is this: The fiery sinking of the MV Sanchi and the complete loss of its entire cargo is far more likely than not to happen on B.C.’s coast if this project is built.

You won’t hear that for a couple of reasons.

The first is because it’s a scenario too horrific to contemplate. If people were to internalize what this would actually look like and what it would mean for our coast, it would pull so many people off the fence the public backlash would kill this project once and for all.

Secondly, and more nefariously, you don’t hear about this because the National Energy Board’s [NEB] approval process was so flawed, Kinder Morgan itself decided how this project’s risk would be evaluated.

To get at the information the NEB received on how likely a tanker sinking off our coast is, you have to go deep. Kinder Morgan’s application contained 21 volumes. This is where the media gets my sympathy: The assessment of marine spill risk was tackled in volume 8A – which alone contained 764 pages of documentation. Little wonder when it comes to the project’s impact on safety and the environment, the coverage is less than enthusiastic.

So spoiler alert here: I’ve read it, and the Sanchi scenario — where a double-hulled tanker goes down in a burning toxic stew of chemicals and crude and ejects all its cargo — according to Kinder Morgan, it’s so unlikely it wasn’t even considered. Yet here we are. 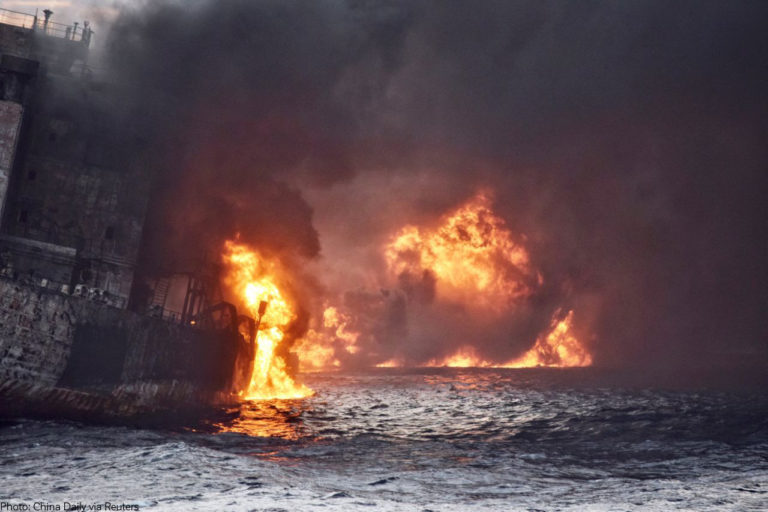 Image by China Daily via Reuters

For risk-assessment geeks, I can tell you what our industry-captured regulator weighed when considering the pros and cons of the project. It’s called the “credible worst case scenario” and in Kinder Morgan’s case it is this: A loaded, escorted tanker strikes Arachne Reef in Haro Strait spilling 104,000 barrels (less than one sixth of the average Aframax carrying capacity).

Western Canada Marine Response Corporation (WCMRC) deploys to the scene (note: from a planned but not currently existing facility in Sidney on Vancouver Island). Spill containment booms are applied. The probability this will occur according to Kinder Morgan? Once every 1,326 years.

Recent history suggests much less predictable outcomes. In 2015 It took 12 hours to find and contain a simple spill on a calm day in Burrard Inlet. That same year our Coast Guard failed to contain a stricken Russian freighter which lost power and nearly ran aground in Haida Gwaii. In late 2016 it took 32 days to raise the Nathan E Stewart off a reef near Bella Bella. The response to all these incidents can be generously described as totally inadequate.

So when Trudeau says “If I thought this project was unsafe for the B.C. coast, I would reject it”, that notion of safety most likely comes from his chief of staff who spoke with a deputy minister who has been briefed by a consultant who had read the approval recommendation and concluded the chance of a small spill is so remote it’s nothing to worry about.

In other words, he is living in the same dream world as Catherine McKenna where they can build pipelines and save the environment at the same time.

Reality is much different, as you can see if you were watching the same news feeds I was.

Doubled hulled tankers go down and spill everything. That condensate you heard about — the stuff that was still burning on the surface of the ocean as the Sanchi slipped under the waves — that’s what makes it possible to put tar in a tanker. The reality is these spills are never contained. In an operating environment where independent royal commissions cannot even conclude what will happen in a real-world marine spill scenario involving bitumen, they place an already compromised environment — not to mention an urban area where millions of people live — in unacceptable peril.

I’m asking you to wake up from that dream and look out your window. The real world reflects reality a lot better than industry consultants do and that reality doesn’t just happen once every 1,326 years.

Tanker catastrophes are in the habit of happening an ocean way. Until they don’t.

Want to learn more about the Sanchi oil tanker tragedy and whether something similar could happen in B.C.? Check out our podcast.