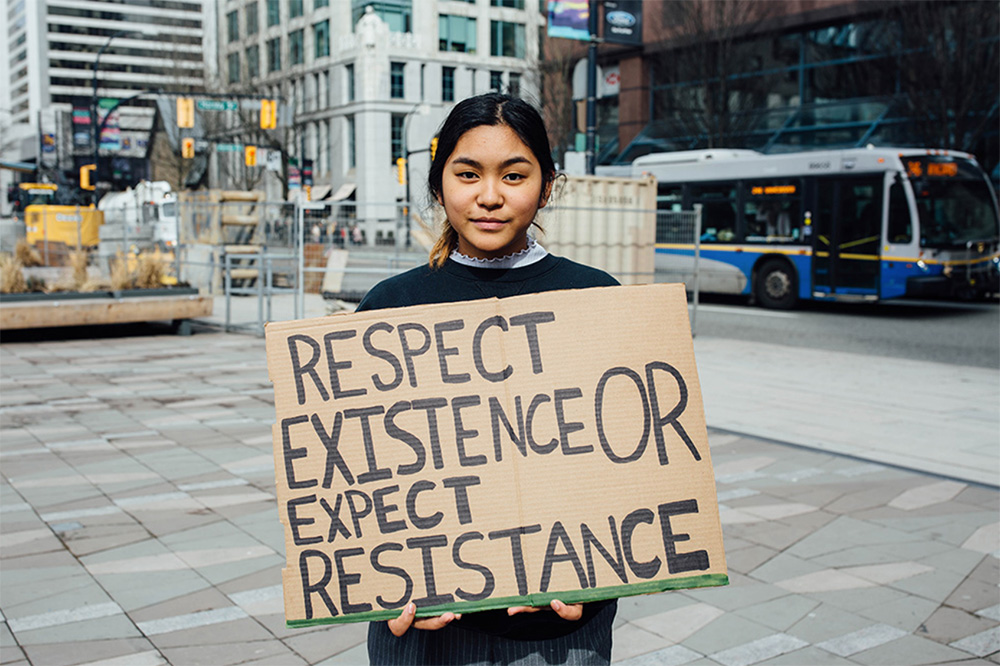 We Face So Many Crises. Let Youth Lead, Serve and Vote

They’ve proven their power, determination and ability to mobilize. Hand over the reins.

Originally printed in The Tyee.

As the world confronts the global pandemic crisis, many have been making comparisons to the Second World War. And rightly so. We are seeing a level of societal mobilization, alongside a pivoting of government priorities and economic activities, that we have not witnessed since that time.

As the young people in our society come to the end of a school year unlike any before, and those in their teens and early 20s in particular wrestle with what the coming year or two will look like, Canada’s Second World War story has some useful guidance to offer.

In the Second World War, over one million Canadians enlisted for military service, from a population at the time of about 11.5 million, a remarkable level of participation, particularly given what those who signed up were prepared to sacrifice. Of the hundreds of thousands of Canadians who went to fight overseas, from all corners of the country and many ethnic backgrounds, the overriding characteristic most had in common was their youth.

The good news for today is that the crises we must confront call upon us to help and to heal — both society and the planet — rather than to fight and kill.

Their time to lead

As the world has begun to confront the climate crisis, the last couple years have seen a burgeoning of youth leadership and a new era of young people exercising their political muscle. As in the war, youth are once again mobilizing to secure our collective future.

Millennials are the largest demographic cohort. Canada’s 2019 federal election was the first in which millennials represented the largest voting bloc, and that reality is only going to increase over time (as the baby boomers leave us over the coming decades). And more than any other generational cohort, polling results indicate that millennials understand the climate crisis and want to see real action. Help is on the way, and we should not just welcome it, but support it.

Youth-led initiatives have been vital to climate mobilization: the student climate strikes, 350.org’s Our Time initiative, the Sunrise Movement in the U.S. (which has rallied support for the amazing Alexandria Ocasio-Cortez and the Green New Deal, making the old-school fossil-fuel-funded Democrats run for cover), and more. There is a new generation of millennials who are now in leadership roles within the Canadian non-governmental organizations that are pushing for a made-in-Canada Green New Deal, and who have emerged as elected leaders within Indigenous communities and at every level of Canadian politics. A transformation is underway.

For many young people, the Second World War is an old story from high school history textbooks; it struggles to find resonance. Yet a growing number of them intimately understand the climate emergency and have started to use a wartime frame, answering its call in inspiring ways. Who would have guessed that so many millennials would be responding so enthusiastically to the idea of a Green New Deal, with its roots in the 1930s?

As one of Vancouver’s climate strike leaders, Rebecca Hamilton, told the CBC in early 2019, “During the Second World War, everybody knew there was a war on. It was the lens through which every individual and government decision was made, and I want the climate crisis to be seen with the same level of urgency and addressed with the same level of scale.”

On Oct. 28, 2019, one week after the federal election, 27 young people were arrested during a sit-down protest in the foyer of the House of Commons. They were all from 350.org’s Our Time initiative, and they were calling on all of the newly-elected members of Parliament to work across party lines and govern for a Green New Deal.

These young people are giving expression to the emergency. They are rightly shaking up what is normal, because we must. And in the face of those who object to their school-time strikes, they are proudly honouring Mark Twain’s wise counsel that, sometimes, you can’t let your schooling interfere with your education. 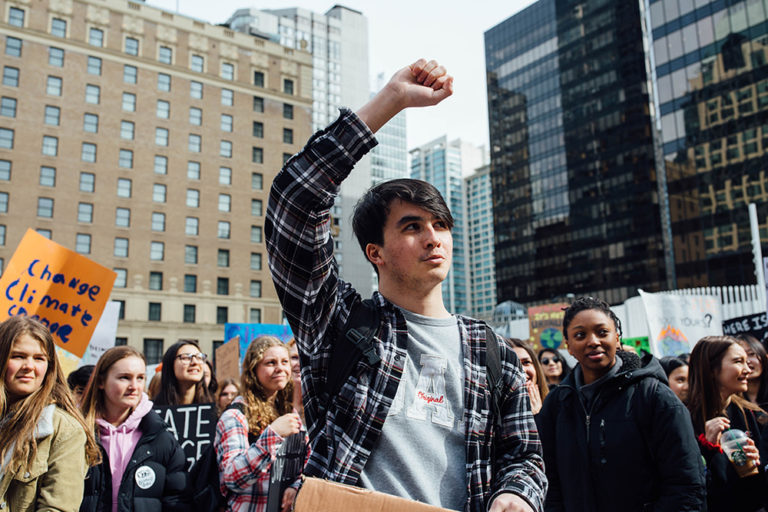 ‘Climate change will be the defining issue facing today’s youth, with profound consequences for their futures, families, communities and careers.’ Photo: Jackie Dives

Young people crave a sense of purpose — a desire to believe in something greater than themselves. We all do, of course, but this too often gets squashed out of the older among us, as we deal with the daily demands of work and family. That yearning for a sense of purpose is what led many to enlist in the Second World War. It is what philosopher William James sought to find in a non-destructive cause in his 1910 essay “The Moral Equivalent of War.”

Kai Nagata is the communications director with the B.C.-based grassroots organization Dogwood. He’s always been an outdoors guy, and at age 20, in 2007, Nagata decided to join the Canadian Grenadier Guards infantry reserve regiment. Given Nagata’s politics, that seemed incongruous to me. But there was no contradiction to him. He says he was bored with going to school and liked the idea of a “gap year” with plenty of physical activity. “It was a way to prove my Canadian-ness,” he said. “Everyone in my platoon was either a recent immigrant or someone who needed a second chance in life.”

His brief time in the military gave Nagata insight into what many young people are looking for — a sense of purpose and comradery. And like William James, Nagata wishes there was “a way to channel that without killing people.” Nagata’s take-away is that Canada needs a new youth corps. Not a compulsory form of youth service, as still exists in some countries, but an attractive one.

The federally created youth program Katimavik comes close. Operating off-and-on since the late 1970s, it has placed more than 35,000 young people into community service volunteer work. But it is only a half-year program with just a handful of spots available each year. More recently, the federal government initiated the Canada Service Corps to offer volunteer opportunities to young people, but it remains in development.

As thousands of Canadian teens complete their high school years, and many who had planned to launch their post-secondary experiences face the uninspiring prospect of doing so online this fall, and thousands see prospects for summer and subsequent employment dry up, now is the perfect time to quickly retool that initiative and launch a new national project — a Youth Climate Corps, a youth mobilization to confront today’s gravest threat.

A large-scale Youth Climate Corps could be aimed at young people who have finished their high school education, inviting them to spend two years volunteering on projects that seek to expedite our climate transition, with all expenses paid, just like in the military. The program should be open to any youth who wish, although special efforts could be made to encourage systematically marginalized youth to enlist. And like the military, when they complete their service, they could be offered free post-secondary education or training.

Members of the YCC could be engaged in restoring ecosystems that help to capture carbon and in building new climate infrastructure (renewable energy projects, building retrofits, high-speed rail, etc.). The work must not displace other workers, but as there is so much climate-related building and restoring to be done, there is no reason such a program should be seen as a zero-sum game. Rather, it could offer apprenticeship training to a generation of youth in the energy transition jobs of the future. And as the work would be largely outdoors, it could be done in the current context with proper safety and while practising physical distancing.

Such a program could be a win-win — youth would be engaged in meaningful work and gain a valuable experience for their future plans and careers, while society gains an eager army of climate warriors helping us rise to the climate emergency.

Climate change will be the defining issue facing today’s youth, with profound consequences for their futures, families, communities and careers. How we confront the largest collective action puzzle of human existence will be the story of their lives. We would do well to fully engage them in the exercise as soon as possible.

According to Veterans Affairs Canada, of those who enlisted during the Second World War, about 700,000 were under the age of 21 (about 64 per cent of the total). Canada did not keep age data of the war dead. However, approximately 44,000 Canadians died in the war, and if one assumes those killed had the same demographic proportions, then about 28,000 would have been below the age of 21.

These hundreds of thousands of young people signed up at our collective request and were willing to risk death. What they could not do, however, was vote. The federal voting age until 1970 was 21. Just as the young people today who will be most impacted by climate change don’t get a say in choosing our elected leaders, so it was then that generations of young people sacrificed themselves in wars decided upon by people they were disenfranchised to select.

We have all watched as these amazing, passionate and well-informed young people have sounded the emergency alarm, roused us into the streets and pushed our political leaders back on their heels. (And conversely, we have all met plenty of older people whose lack of political knowledge and understanding is mind-blowing, yet no one suggests this should deny them the right to vote.) How preposterous then that our society deems today’s climate strike leaders unfit to cast a ballot.

Surely, the case is now clear that denying these people the right to vote represents a grave injustice. What’s more, we need these voters lickety-split — we need their clear-headed priorities in the political debate, and we need those who seek to be our elected representatives to feel the practical pressure of winning the favour of these young people. Extending the franchise would be politically transformative, and doing so deserves a place of priority in any climate emergency agenda.

As we mobilize to confront the current crises and consider the role of young people today, let us indeed embrace some core lessons from the last great mobilization: let them lead, let them serve, and let them vote. – Originally printed in The Tyee.