Fishing for votes in Courtenay-Alberni

In politics, like on the river, local knowledge goes a long way

Port Alberni, Parksville, Courtenay. The Puntledge. The Stamp. The Englishman.

Autumn is a time of reckoning in towns along the banks of Vancouver Island’s legendary salmon rivers. As the icons of B.C. return home they bring news about the state of the world. In their flesh is a story of how we managed our past. Their pace upstream a measure of the present. Their success on the spawning grounds a harbinger for the future.

For people like me who pay attention to salmon, the fall run is a true story about what’s working and what’s not in the world of fish. I can’t help but notice its parallels with politics.

As we hit the home stretch of the federal election campaign, voters in the riding of Courtenay-Alberni are assessing the five candidates vying to represent them in Ottawa. The one who gets the most votes October 21 will become our Member of Parliament. It’s no exaggeration to say MPs coming together to form government will grapple with some of the toughest decisions this country has faced since World War II.

The next four years are crucial

As I wade slowly out into my local river I see a big Chinook break the surface. That fish left this river four years ago. Like a candidate stepping off the party bus, it’s back with a story to tell. As the fall run brings a unique mix of salmon species to each river, the same goes for any federal riding. Courtenay-Alberni is a case in point.

Despite spending months trying, the Liberal Party was not able to attract a single candidate that actually lives in the riding. Contrast that with the star power they are able to draw in other ridings across B.C. The NDP have held the riding since 2015. The Conservatives, still stinging from that upset, started working on a comeback way back in 2017. They recruited a well-connected power player from Vancouver and set him up in Parksville. The tenacious Greens are running a rookie.

Seasoned anglers know a successful outing depends less on luck and more about getting to know your local rivers. In a sentence, that’s Dogwood’s 2019 Vote Local campaign. Let’s take a moment and dig a little deeper into what’s happening in Courtenay-Alberni.

Fishing is something that brings together voters across the political spectrum. It’s still a big economic driver in these parts. Despite the scant attention Conservatives in Ottawa pay to the issue, it’s a consistent topic of conversation for local candidate Byron Horner. This is a good thing. It shows the candidate is comfortable developing expertise in an area that his party has pretty much abandoned. 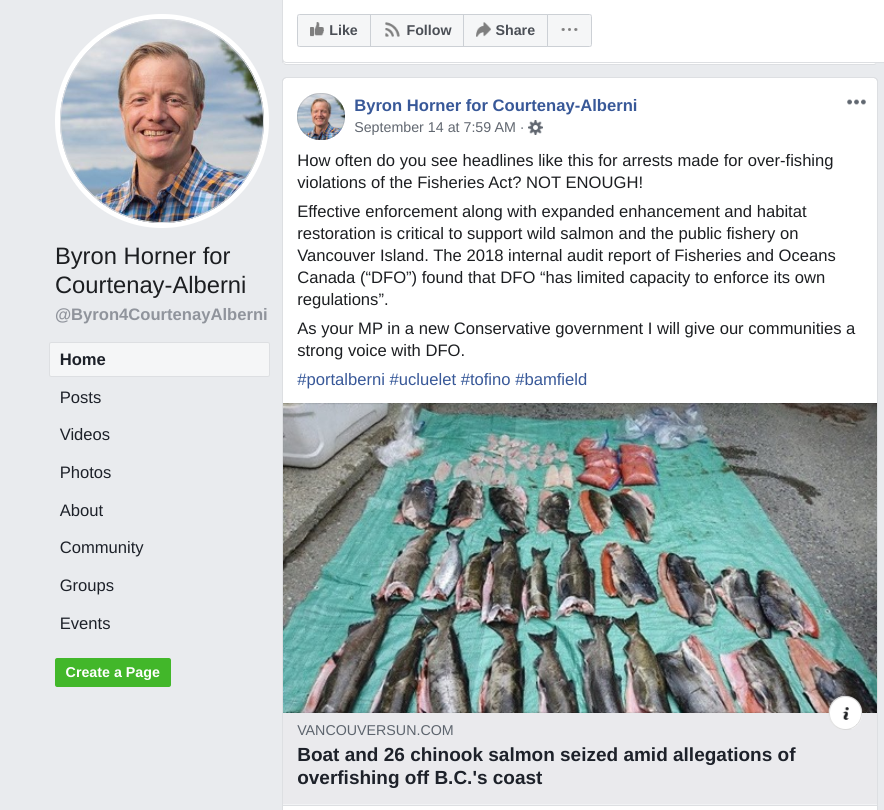 Unfortunately Conservative Byron Horner isn’t starting that conversation with an honest assessment. He’s stirring up anger about the status quo, while hoping you will forget the role his predecessors played in creating it. The Conservatives eliminated all the Fisheries Officers positions in Comox, gutted DFO and removed the habitat protection provisions from the Fisheries Act.

It’s not the only area where Horner’s campaign makes errors of omission. One thing he says often is “critical projects to improve our bridges, highways and recreational facilities on Vancouver Island are not getting funding.” Unfortunately, nothing is easier to verify than government expenditures. It turns out during the 10 year period between 2005 and 2015, when the Conservatives were in power, a total of $16,554,417 (not counting gas-tax revenue) was allocated to the riding, averaging just over $1.5 million per year. In the past four years under incumbent MP Gord Johns more than $100 million flowed to the riding, averaging $25 million per year on infrastructure and services.

Horner also likes to say “the Conservative Party is the only party that can elect an MP from our region and form government.” Current modelling suggests the Conservatives have a 10 per cent chance of winning a majority. It’s far more likely the next government will be a minority. In that scenario local MPs from all parties will have tremendous influence in determining the composition of our next government — and what it’s key priorities will be.

Finally, Horner’s attempt to greenwash his campaign through his financing of the Great Bear Rainforest IMAX film is encountering pushback from the people in the film itself. Horner is a wealthy executive on leave from the Washington Group. He’s in business with the son of billionaire Dennis Washington, one of the wealthiest people in America. He’s worked in business law and finance all his life. Yet hardly a day goes by without him mentioning the role he played as an executive producer on the Great Bear Rainforest IMAX film.

Horner appears to be violating an agreement he made not to use the film for political purposes, struck between him, the filmmaker, and the Indigenous communities who have worked for millennia to steward the territories portrayed in the film. Last week the Heiltsuk Nation took the extraordinary step of issuing this statement: “For the Record and Heiltsuk Truth: The Great Bear Rainforest Should Not Be Exploited for Partisan Purposes.”

Heading into the 2019 election there was a lot of talk about whether the issue of climate change would play a starring role. As summer drew to a close and murmurs about a global climate strike started to bubble up, Abacus Data went into the field, and found it was indeed a galvanizing issue. Yet, as the campaign kicked off, pundits, and party strategists still wondered whether the issue would cut through the “it’s the economy, stupid” mentality of most federal elections.

On September 27th in Courtenay we had our answer. As bewildered RCMP officers and commuters alike looked on, Highway 19A was blocked as close to 3,000 people poured off parkways and sidewalks into the streets. 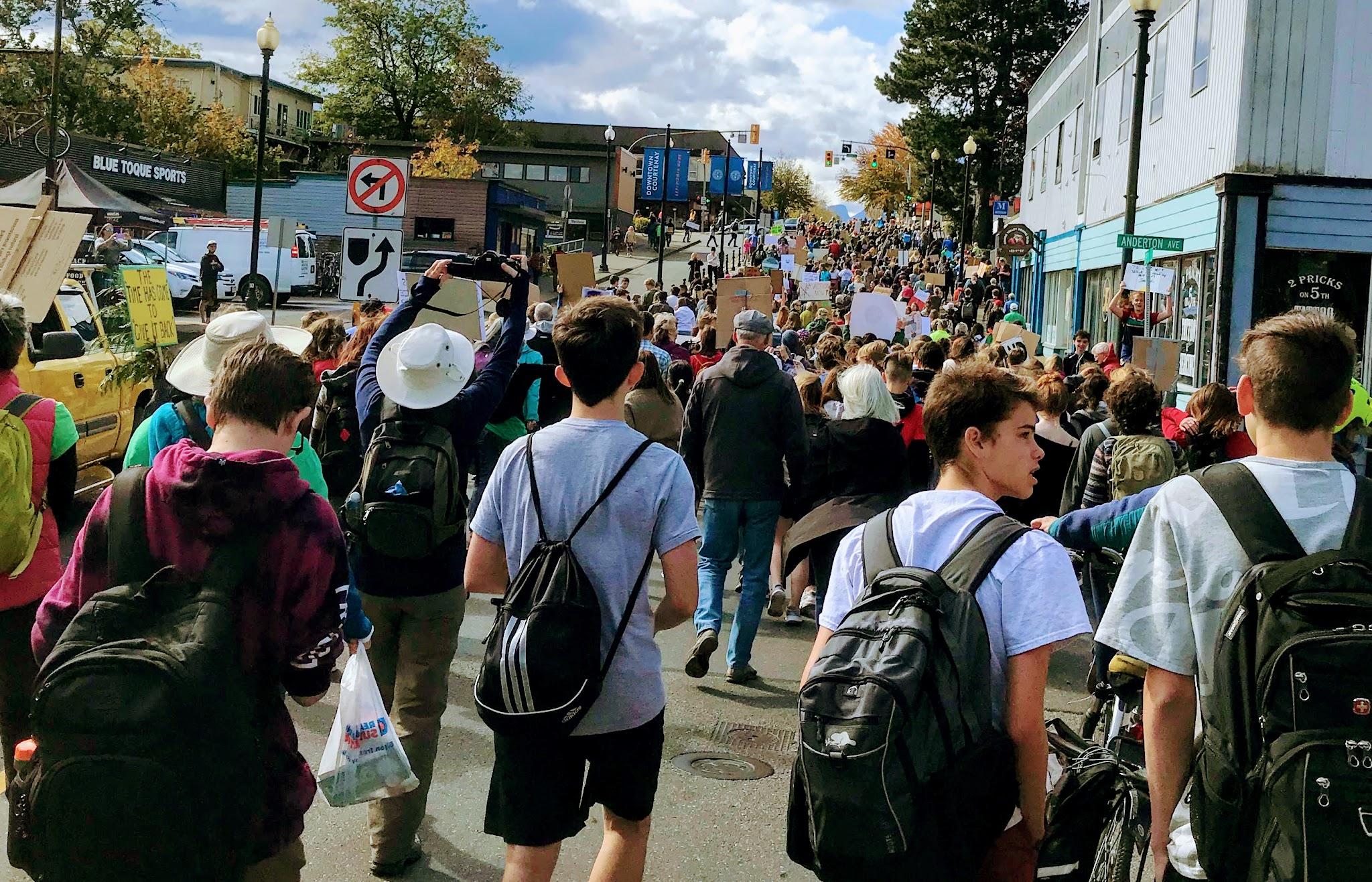 Perhaps it was unsurprising that Horner was a no-show at the single largest demonstration in modern history in the Comox Valley. After all, Conservatives have never been known to sanction kids skipping class. But ducking the climate issue became a pattern when Horner declined to attend the riding’s largest all-candidates forum, “Canada and the Climate Crisis” held October 4th in Courtenay. 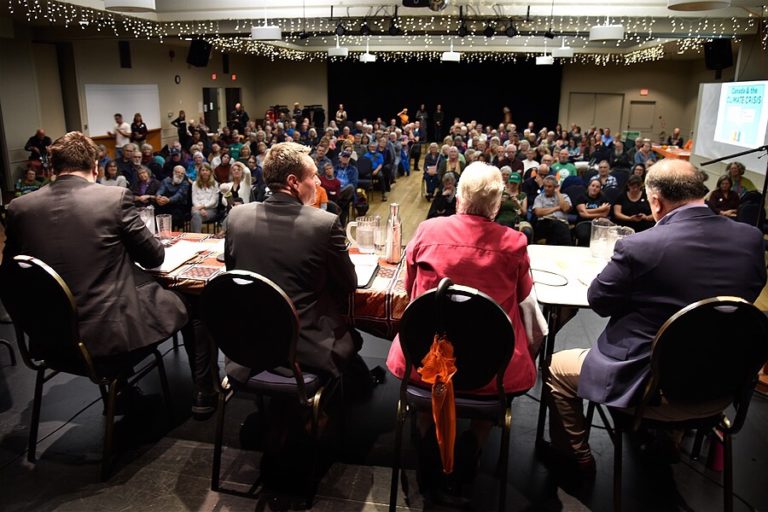 In the weeks since, it’s become clear the Conservative plan to protect the environment doesn’t take the issue of climate change seriously. On October 21 we’ll find out if ignoring the single greatest issue of our time will derail the Conservative comeback — or if First Past the Post scatters centre-left votes enough to halt Canada’s transition to a green economy. Long term, it’s difficult to imagine the Conservatives growing their supporter base so long as climate change deniers remain a vocal constituency within the party.

The parallels between politics and salmon fishing are not lost on me as a bruising Chinook leaps out of the water, shakes my hook free, and thrashes furiously upstream. I can depend on these fish. They prove our world is real. In their determination, they show hope for the future. Most importantly the story they tell, for better or worse, is the truth.

I guess I have the same expectation of candidates out on the trail.

In Courtenay-Alberni an incumbent MP with a voting record anyone can see is facing two classes of candidates. One has deep pockets and apparently a penchant for filtering the truth. The others are newcomers doing their best to make their mark with few resources spread across a huge riding. You can get to know them a little better on our Vote Local page.

Whoever wins, for better or worse, will play a key role in guiding this country’s response to the climate crisis over the next four years.

One response to “Fishing for votes in Courtenay-Alberni”

Jonathan Wilkinson: the Minister of Greenwash

After working for ExxonMobil and Shell, it looks like his job now is to grow Canada’s oil sands After the 2019 federal election, Alberta premier Jason Kenney laid out his demands for Ottawa. He wanted Environment Minister Catherine McKenna, whom he called “anti-pipeline,” replaced with someone the oil companies could trust. Prime Minister Trudeau tapped […]

OTTAWA – The Liberal government plans to spend five times more on pipeline construction this year than fighting climate change, according to new calculations from B.C. nonprofit Dogwood. Thursday’s throne speech laid out a series of climate commitments drawn from the Liberal platform, which total $816 million in budget year 2020-21. Over the same period, […]

Trudeau’s centrist cabinet on the track of no return There’s an old song from the popular folk-rock album Working Man’s Dead about the infamous train conductor Casey Jones. As Trudeau’s new cabinet was sworn in at Rideau Hall, the lyrics wormed their way into my brain. The song retells the story of how an engineer […]