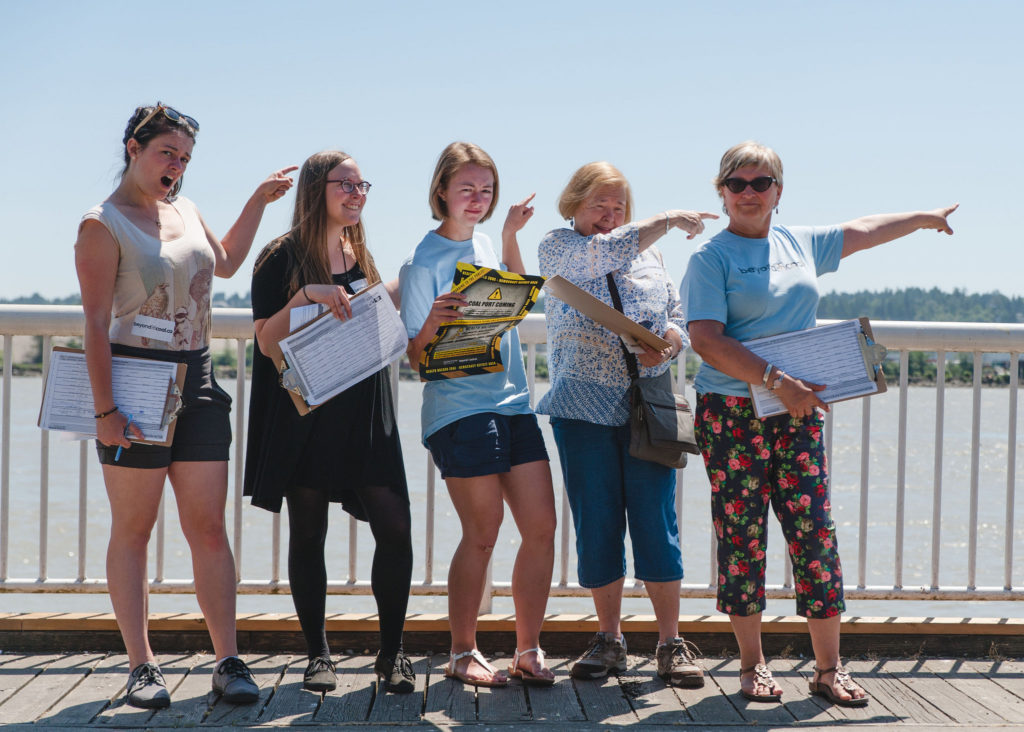 It’s time we got the meaningful, democratic process we deserve

Wendy lives in North Delta. She’s been there for nearly 30 years. Wendy’s husband Ted has asthma. Ted’s father and grandfather both died of emphysema, so he’s vigilant about keeping his lungs healthy.

Wendy and Ted live less than 100 meters from the train tracks. Most residents in their neighbourhood are adamantly opposed to having U.S. thermal coal transported through their community – lengthy trains would block emergency routes and blow toxic coal dust past their homes.

“What I don’t understand is why Port Metro Vancouver and the Liberal government would even consider bringing dirty thermal coal from the United States into a major urban center where more than two million people live, work and play,” Wendy says.

“We pride ourselves on being a green city and very health conscious, so this kind of thought process doesn’t make sense to many of us living in Metro Vancouver.”

Wendy’s not alone. Tens of thousands of British Columbians are seriously concerned about plans to turn our province into a coal export superhighway, but so far the B.C. government has refused to use its authority to require comprehensive assessments of these projects and no other governments are stepping up.

Wendy thinks something’s amiss here. She sees the B.C. government’s claims to have an interest in helping other countries transition away from dirty energy sources like coal as disingenuous.

“It’s time the provincial government stand by their claims and do what is right for this city and for British Columbia. This city belongs to all of us, not just to those who stand to benefit financially.”

Officials aren’t giving proper weight to how toxic coal dust, diesel exhaust, traffic congestion and water and fish contamination would negatively affect you and your family. We need more people like Wendy and Ted who are willing to share their stories and hold governments accountable for their failing leadership on this issue – that’s why we created CoalExportStories.org.

Coal Export Stories is a place for you to tell your personal story and ask the hard questions of our elected leaders. Coal Export Stories not only allows neighbours to share stories with each other, it puts decision-makers face-to-face with the people whose lives would be impacted by increased coal exports.

Why tell our stories? Personal stories based on what we value the most have a much greater impact on people than facts and figures. People power is built upon individuals sharing their stories and finding their voices.

So what kind of stories are we looking for?

Maybe you’re among those we’ve heard from who live along the coal train route and have to power-wash home exteriors every year due to coal dust buildup.

Maybe you tried to raise your concerns about the Fraser Surrey Docks-Texada Island coal expansion project with Port Metro Vancouver and the B.C. government, but you were shut out or shut down like so many others.

Maybe you live along a coal export route and fear for your family’s health if the project goes through.

Or maybe you want to protect our local airshed and the global climate from the serious impacts of burning coal in Asian power plants.

We want to hear them all. Tell us your concerns, your experiences and why you think this project is a bad idea for British Columbian families.

But we also think it’s time we heard some answers.

This is your chance to ask our provincial leaders the hard questions about why our neighbours to the south put B.C. to shame when it comes to coal export project reviews, why they’re ignoring B.C.’s medical health officers’ concerns about coal shipments or how U.S. thermal coal fits into their climate change agenda.

We’re going to make sure key decision-makers hear from you.

Our provincial leaders have made a habit of throwing their hands up in the air and falsely proclaiming coal exports are entirely out of their jurisdiction. Lately, our municipal leaders are the only ones willing to take action.

Topping off 14 municipal and regional resolutions was last month’s victory at the Union of BC Municipalities conference in Whistler. Representatives from across the province voted almost unanimously in favour of more government oversight of thermal coal exports.

The resolution acknowledges “there is currently no mechanism that provides oversight or ensures the implementation of mitigation measures to minimize environmental and health impacts of thermal coal transport over coastal waters and by rail.”

B.C.’s mayors and councillors recognize this is serious stuff we’re dealing with here. It’s pretty sad that we have to lobby for the same kind of leadership from our premier and ministers – but if we must, then we will.

Join us today by sharing your personal story or asking your burning questions. As submissions are added to the site, we’ll map them so you can see and hear the stories of the whole coal export corridor – across borders and miles and miles of rail lines. We’ll also share your stories and questions with key decision-makers so they know just how strong our movement is.

When I think of champions for local decision-making power and defending the health of their communities, I think of members of the Sunshine Coast Regional District who brought forward the winning resolution last month in Whistler. I think of city councils like New Westminster, White Rock and Surrey who’ve never been afraid to stick up for their communities.

Provincial leaders who have the power to call for legitimate reviews of coal export projects but refuse to do so will soon be seen as politically irrelevant.

It’s time for them to break the silence. It’s time to quit with the excuses. It’s time we got the meaningful, democratic process we deserve.

Tell them your story and ask the hard questions at CoalExportStories.org – today.