The Scandal of Leadership in British Columbia Today

Remember when politicians stood up for ordinary citizens? I do.

There was a day when politicians stood up for the interests of average British Columbians. You will be wise to the ways of the world if you remember when W.A.C. Bennett backed down both the Americans and Ottawa and nationalized BC Hydro – making sure British Columbians controlled their energy future. And I’m guessing if you still have hair it will be past grey if you remember when Dave Barrett created the ALR, established pharmacare, the right to strike, and legislated into existence ICBC and protection for renters. Their legacies have not only stood the test of time, they laid the groundwork for the prosperity our Province enjoys today. 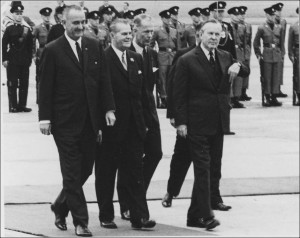 About the same time in our turbulent history the City of Vancouver made the fateful decision to stop a highway that would have divided the city in two and instead began extending electric transit across the Lower Mainland. In response to a series of oil spills up and down the coast, the Regional Districts demanded and received a West Coast drilling ban that stands to this day. Climate change was not on the radar, so opposition to oil and gas pipelines, if there was any, was localized. Perhaps that’s because they carried crude and natural gas to refineries on our own soil, were regulated by the government, and the profits stayed closer to home.

It was clear then, as it is now, that major oil and gas companies sought and sometimes received favours from all levels of government. After all, the original Trans Mountain pipeline was approved after a three day hearing. People were as concerned then about the undue influence of money in politics as they are today, but development in general was closer in rhythm to the strength of our economy, which in turn was in sync with ordinary British Columbians. Workers and managers alike, the people who built the hospitals, taught in the schools, plied their trades and made the hard decisions needed to run a growing metropolis — all of them could afford to live where they worked. Maybe people were comfortable living with the notion that a rising tide lifts all boats and felt they were part of that tide.

I’m not saying those days were perfect, because they weren’t. We failed First Nations miserably, we overharvested our natural capital, we didn’t treat everyone in our society equitably, and we didn’t understand that our environment could only take so much.

But they were our decisions. Our politicians were accessible, and we held ourselves accountable and began to methodically change how we managed our land, air and water.

It’s been nearly half a century since  that fateful decade spanning mid 1960s to the mid 70s. And as we spin through time, we’ve yet to turn up many more leaders like Barrett or Bennett – leaders who demonstrated how to stand up to Ottawa, leaders who understood their job was to serve all of British Columbia’s interests.

This week with stories of bribery, secret meetings, donations of vast amounts of cash to party coffers and offshore tax havens swirling around elected officials at home and abroad, a glance back in time could help British Columbians reflect on the calibre of today’s leadership – because as the world approaches a tipping point on climate, the challenges are many, and the hour is late.

Let’s get this out of the way. If history is any guide, we can’t rely on Ottawa to solve our problems. When it comes to British Columbia, Ottawa has more often than not been an adversary to our interests. It was true in 1913 when Robert Borden declared martial law and sent 1,000 troops to Vancouver Island to prop up Dunsmuir’s unethical coal mining practices. It was true in 1963 when Pearson attempted to negotiate away our hydro power to the Americans. It was true in 2013 when Harper tried to ram through Northern Gateway without consent.

Ordinary British Columbians voted Harper out of office precisely because of the way he treated B.C., his failure to lead on climate change, and his connections to Big Oil. What they got as a replacement is not without irony. With a sunny smile, Catherine McKenna approved Woodfibre, hasn’t said a word as Harper-appointed Port Authorities lay out plans to expropriate farmland needed to facilitate gas and coal exports, and appears set to approve the link from the world’s largest carbon source to the BC Coast. The worry remains that Ottawa’s interests are not, ultimately, aligned with ours.

Given persistent federal attitudes it’s worth asking: is Christy Clark cut from the same cloth as Barrett or Bennett? On West Coast oil tankers, she established her government’s five conditions and so far has held the line, though some wonder if she is now attempting to get to yes. Certainly Clark has backtracked on her predecessor’s climate targets, and there are worrying signs she is captured by the fracking industry.

The inconvenient truth is this: we can’t win the fight of our lives if we keep unlocking massive new fossil fuel exports. With the Globe’s Gary Mason reporting on corporate heavyweights paying up to $20,000 for private access to the Premier, a fundraising team led by Condo King Bob Rennie, public declarations that anyone who opposes LNG development sides with “the forces of no” and an election campaign war-chest filled by out-of-Province oil and gas interests, the Premier laughably attempts to cast herself as a populist. I’m pretty certain these fishermen pictured here didn’t need to fork over $5,000 each to chat with Dave. 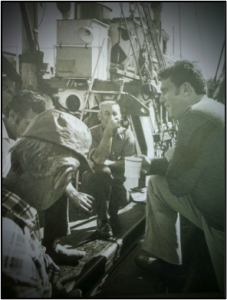 If Trudeau approves Kinder Morgan’s proposed expansion in December, Vancouver will no longer be the “Greenest City”.  It will be the West Coast’s largest oil port, a tap for the world’s dirtiest fuel leading straight to the People’s Republic of China. Once it opens, can you imagine trying to turn it off? And with a Premier determined to create a brand new carbon economy at the exact moment the world needs us to engineer an electric economy, I can’t help but think of the squandered opportunities. Remember Ballard Power? We led the world in fuel cells, they were built right here in Burnaby. Why didn’t we nurture that?

With scandalous amounts of corporate money flooding into the coffers of political parties on what seems like almost a weekly basis, can anyone reasonably conclude that influence and access is not being bought? Despite the barrage of media scrutiny the Premier is digging in, counting on an apathetic public to let her ride it out. So is the opposition leader, John Horgan, who promises to stop taking corporate and union money only if Clark agrees to an armistice.

But this storm has uncovered something drastically wrong, and there appears to be no hero waiting in the wings to help us remember what true leadership looks like. Once again it’s up to us. Dogwood’s supporters have experience organizing themselves into an effective political force. If you are up for channeling your inner W.A.C. or your inner Dave Barrett, do it now. Your province needs you.