Who gets to lead?

B.C. youth leaders get ready for the fight of their lives

“Greta Thunberg is clearly mentally unstable,” tweeted Maxime Bernier, former cabinet minister and leader of the far-right People’s Party of Canada. “Not only autistic, but obsessive-compulsive, eating disorder, depression and lethargy, and she lives in a constant state of fear.”

The young people had shared stories, learned from local organizers, met with MLAs, then presented compelling campaign plans to a room full of grownups. They explained their strategies to make an impact in British Columbia and beyond, at the intersection of ecology, society and politics.

Then they had to watch Bernier – a grown man in the political limelight – publicly attack a 16-year-old climate activist with Asperger’s syndrome.

Why did he do it?

I think it’s about leadership. At this moment in human history, we face an important question. Who gets to lead? For Bernier, it’s important to establish that a young person – especially a young female, who thinks differently than the status quo – cannot.

I am hopeful because I see shifts in who is recognized as a leader, in spite of the efforts of Bernier and people like him.

I remember thinking “this is leadership” as I watched Grand Chief Stewart Phillip, President of the Union of B.C. Indian Chiefs, speak on stage. He spoke from the heart, he frankly laid out the historical and present necessity of fighting for safe land and water, and he welcomed allies. He commands respect.

While my settler Canadian ancestors may have dismissed, minimized, undermined and opposed Indigenous leaders, I can choose to acknowledge and lift up Indigenous leadership. The same is true of other people who have been excluded from the corridors of power.

For the 14 participants who completed Dogwood’s Summit program this summer, Greta Thunberg is absolutely a leader. Only a year ago she sat down, alone, in front of the Swedish legislature with a sign that said “School strike for climate.” In doing so, she invited millions of other young people to do the same, including young people in British Columbia.

Several of our Summit participants took their first actions with local school strikes this year. These high school students are already a disruptive force in our politics – and they’re just getting started. 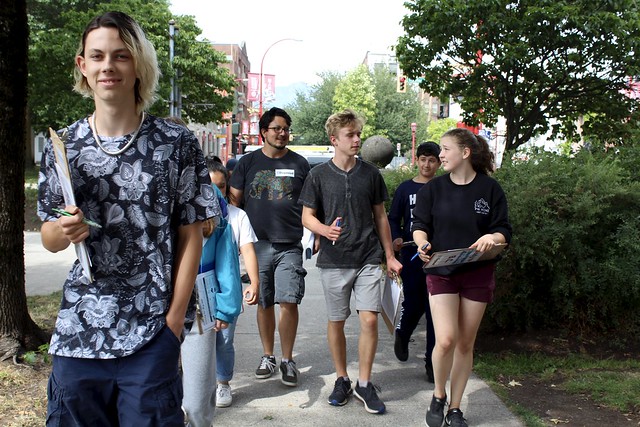 Summit participants head out to canvass with Dogwood organizers in Vancouver.

A couple months later, I watched those youth leaders stand in front of local community and business leaders in Vancouver and Victoria and present four new campaigns: to Indigenize the B.C. K-12 curriculum, to lower the voting age in British Columbia to 16, to pressure the federal government to provide clean water to every Indigenous community and to get a voting youth member on every school board in the province.

I’m inspired! These are serious campaigns. The audience members were also inspired. I saw a few wipe away tears before responding to the presenters’ request for support in the form of signatures and connections to other potential allies.

But other adults see this energy from young people – and lash out. Returning to Maxime Bernier, I wonder about the value of Martin Luther King’s provocative passage: “In the end, we will remember not the words of our enemies, but the silence of our friends.”

Time to show up for young people

I wonder if the words of the PPC leader – cruel as they are for any young person who shares the mental burden of an ecologically and socially screwed-up world – are actually easier to bear than the silence or passivity of parents, aunts, uncles, grandparents, teachers and other adults.

At the end of the Victoria presentations, someone in the back of the room raised his hand and asked what adults could do to better support youth. One of the young people described a local climate strike: “There were more than 300 students, and only… well, I don’t know how many adults. But not that many.”

Show up, was the answer.

The man who asked the question agreed to attend the upcoming global climate strikes between September 20-27. Youth all over B.C. are organizing coordinated school walkouts.

What about you? Whose leadership do you recognize and lift up?

Politicians and oil executives are now attacking children for trying to secure their own future. Are we going to show up when these young people call on us?

November 26, 2020 FOR IMMEDIATE RELEASE Youth applaud BCFED resolution to lower the voting age VANCOUVER – Democratic reform advocates are celebrating a vote by BC Federation of Labour delegates to support lowering the voting age in British Columbia. The resolution passed by a wide margin Thursday morning, making the BCFED the latest labour organization […]