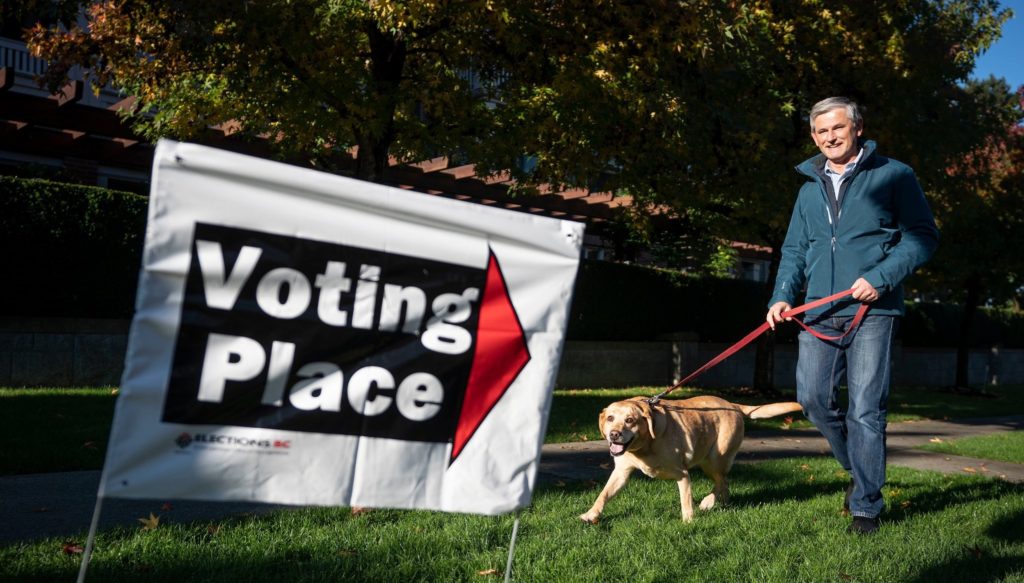 Winners and losers in the B.C. election

Voter turnout crashes. The NDP triumphs. Who stands to gain?

Horgan’s election timing was ruthless but effective: the BC Liberals were saddled with a weak leader, the Greens had elected theirs just days earlier – and the public was focused on surviving a pandemic. Horgan offered reassurance, a steady hand on the tiller and a bit more money in your pocket. On Saturday he made history as the first NDP premier to win re-election in B.C.

Losers: everyone who couldn’t vote

Elections BC estimates only 52 per cent of British Columbians cast ballots in this early election – the lowest in recorded history. This is deeply disappointing, especially after all the work we did in 2017 to boost turnout, including among young voters. This time around Dogwood volunteers spoke to many people on the phones who thought they couldn’t vote because they were self-isolating, forgot to return mail-in ballots, or were reluctant to vote in person and struggled to navigate the alternatives.

Andrew Wilkinson has resigned as leader after a disastrous campaign that saw his caucus cut down by a dozen seats. High-profile former cabinet ministers like Mary Polak, Sam Sullivan and Jas Johal went down to defeat. Others, like Rich Coleman, chose not to run and saw their ridings painted orange. It will be up to a few grizzled veterans to put together an opposition bench while the party regroups and picks a new leader.

The three-member Green caucus lost the kingmaker status they held in the previous minority legislature. With the Confidence and Supply Agreement dead, the NDP government no longer needs to negotiate budgets or new laws with the Greens. Former leader Andrew Weaver twisted the knife by endorsing John Horgan and even recording a campaign ad – which helped deliver his old seat to Murray Rankin of the NDP.

On the other hand, Sonia Furstenau and Adam Olsen are now free to criticize the government however they like. Green candidate Jeremy Valeriote has likely won the party’s first mainland seat, in West Vancouver-Sea to Sky. The trio will be a voice for the large majority of British Columbians who want to end oil and gas subsidies, build more renewable energy and move faster on climate.

Notorious BC Liberal MLA Laurie Throness, who defended “conversion therapy” and was finally kicked out of his party for comparing birth control to eugenics, will lose his seat in Chilliwack-Kent if preliminary results hold. Controversial BC Liberal candidates Lorraine Brett and Margaret Kunst also lost their races.

Women secured slightly more representation in the legislature Saturday night, elected or leading in 36 seats. That’s up two from last time, and works out to 41 per cent of MLAs. White men are still the biggest group in the legislature, winning 47 per cent of seats despite making up just 32 per cent of the B.C. population. These numbers could shift once mail-in and absentee ballots are counted.

Not set up to win: Indigenous, Black and POC candidates

The parties ran 10 Indigenous candidates in this election, but only three won, all incumbents. That’s down from four in the last parliament (Carole James is of Métis ancestry). No Black candidates won. All in all, the ethnic diversity of the B.C. legislature appears unchanged from 2017. Perhaps if Annita McPhee had not been disqualified from running for the NDP in Stikine, these numbers would be slightly different. Bottom line: like most big institutions, political parties have work to do to better reflect the people who live in B.C.

Promising, knowledgeable, articulate young candidates like Jaeden Dela Torre, Kate O’Connor and Harrison Johnston were all defeated by much older opponents. Tesicca Truong is behind in Vancouver-Langara. 40 per cent of British Columbians are under 35 years old, but had no representation in the last parliament. B.C. could start to fix this (and boost voter turnout) by lowering the voting age to 16. BC NDP members overwhelmingly supported a Vote 16 resolution at the party’s convention last fall, but it was left out of the election platform. Youth activists will be working to put it back on the agenda.

The orange team’s consultants and campaign workers waited a long time in the political wilderness. The last three years gave them a taste of power, but now they can really cash in. Watch for failed candidates to find themselves in cushy new appointments, while party insiders pull down big government contracts and NDP-aligned lobbyists sign up a wealth of new clients. But hey, every government does it.

With 45 per cent of the vote, the NDP is on track to win 63 per cent of seats in the legislature. It’s vindication for New Democrats like Bill Tieleman, who have long fought against proportional representation. Under a Pro Rep system the Greens might have won 13 seats Saturday night, forcing the NDP to cooperate or negotiate to pass bills. That’s exactly what Horgan’s team was trying to avoid. Whether or not the NDP deliberately designed the 2018 referendum to fail, electoral reform is now truly dead in B.C.

The pandemic was a big factor, but I found this election much less noxious than previous campaigns when the parties had unlimited corporate and union cash. No garish buses, fewer ads, plastic signs and robocalls. This is the world without Big Money in elections – thank you Dermod Travis, Integrity BC, Lisa Sammartino, Dogwood volunteers and everyone who made this victory possible.

Now that real estate barons, Imperial Metals, the state oil company of Malaysia or U.S. fracking companies can’t just buy access to politicians directly, they have to find more creative ways to subvert our democracy. Clearly they are still finding plenty of ways to influence our politicians – our job is to bring those backchannels to light, and counterbalance big corporations with people power. One bright spot: after pausing for the election, justice Cullen’s inquiry into money-laundering is back up and running this week.

The NDP has provided much-needed relief to families with modest incomes. The elimination of MSP premiums and savings on childcare are big ones. The real estate speculation tax and the inquiry into gas prices may slow cost increases for renters and drivers. And whatever you think of bridge tolls, Horgan says he won’t bring them back. Plus the NDP promised up to $1,000 in additional “COVID relief” – although that money may not come until next year.

On the other hand, anyone who uses electricity is likely to see their bill climb as BC Hydro struggles to control the ballooning cost of the Site C dam. Senior government officials knew in May 2019 that the dam’s foundation won’t hold, but hid that information from the public until the dying days of the election. BC Hydro won’t even estimate how many billions it might take to complete it. With rates going up, now is the time for homeowners to invest in energy efficiency, heat pumps – and if you can, solar panels and batteries.

Speaking of Site C, the megadam on the Peace River is critical to the B.C. government’s plan to export vast quantities of fracked gas. That’s also what’s driving the Horgan government’s big increase in oil and gas subsidies, which now rob B.C. taxpayers of $1 billion a year. Expect to see more work trucks (many of them with Alberta plates) as Trans Mountain, Coastal Gaslink and Site C prepare to swing into high gear – all fuelled with public money that should be putting those welders and construction crews to work building renewable energy and green housing.

Monday after the election, the B.C. Environmental Assessment Office renewed the Woodfibre LNG plant’s expired permits for another five years. The troubled gas export project in Howe Sound is owned by Indonesian billionaire Sukanto Tanoto. Also celebrating the certainty of a majority government: state-owned oil companies in Malaysia, China and Korea, as well as Mitsubishi and Royal Dutch Shell – which together make up the heavily subsidized “LNG Canada” consortium.

B.C. still has no endangered species law, in large part thanks to the powerful logging lobby intent on cutting down B.C.’s remaining old-growth forests. This is driving species like the woodland caribou extinct. Rather than slow the clearcutting, the government has approved plans to shoot cow moose and their babies (which compete for feed) and gun down wolves from helicopters.

The province’s election regulator trained thousands of poll workers on pandemic voting protocols, on a very short timeline. They produced and mailed hundreds of thousands of ballot packages to every corner of the province. They kept us safe, and most voters reported a very smooth process. I certainly don’t blame Elections BC for the dismal voter turnout – that was entirely a consequence of calling a snap election in the middle of a pandemic.

In ridings like mine, where one party won in a landslide, my mail-in ballot is irrelevant to the outcome. It will sit in a warehouse for a few days, then be couriered back to the riding for counting and quietly added to the total. But in a handful of ridings there’s some actual suspense. Elections BC says we’ll have the final results in mid-November. I’ll update this blog post if anything changes!

7 Responses to “Winners and losers in the B.C. election”