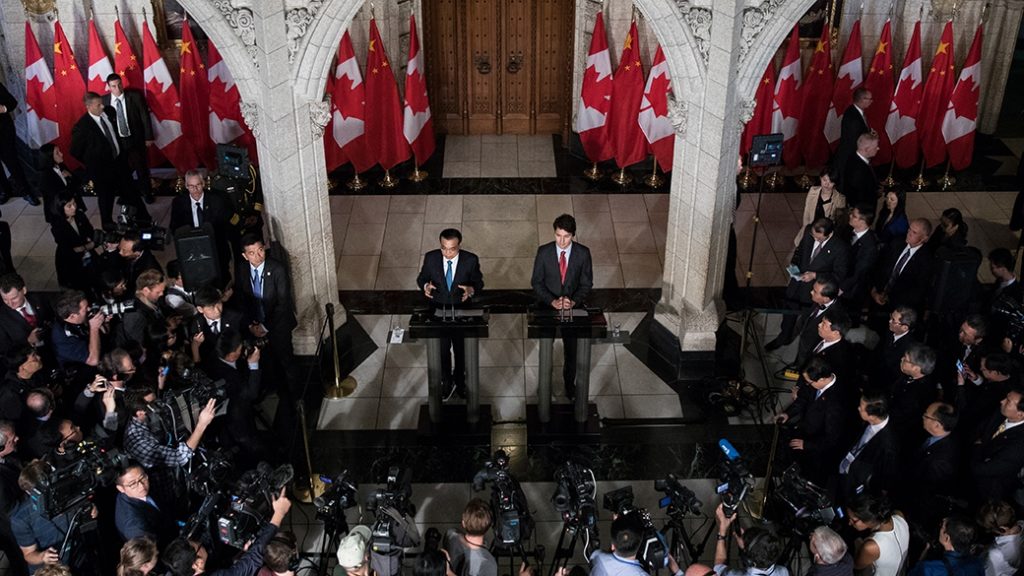 Will Trudeau cling to Trump … or China?

The election of Donald Trump to the White House last week instantly revived hopes for the Keystone XL pipeline. Blocked by President Obama, the line would drain nearly a million barrels a day of Canadian crude to the most lucrative market in the world for heavy oil: the U.S. Gulf Coast.

Trump is a yuuge supporter of Keystone. So was Justin Trudeau before he was elected Prime Minister. You would think this turn of events would present an elegant solution to a Liberal government determined to expand the oil sands but anxious about its brand.

Recall that Chinese government officials have been adamant in their desire for two things – greater ownership of Canadian resource companies and more pipelines to the West Coast. On both fronts, Trudeau’s Liberals appear eager to please.

Carr, who routinely mocks Conservative MPs in Parliament for having failed to build pipelines to “tidewater,” dropped another hint that he plans to approve Kinder Morgan’s Trans Mountain expansion in the coming days.

“I think that if you listen to what the Prime Minister has said about moving our resources sustainably, the importance of responding to the demands within other export markets and not to rely solely on one major market – that’s a sensible approach to take,” Carr said.

In plain English, Carr is willing to put B.C.’s entire South Coast at risk from a tanker spill, wipe out the last resident orcas, provoke years of Standing Rock-style civil unrest and sacrifice Liberal MPs in the next election – all so we can take a discount on Canadian crude.

That’s not a “sensible” approach. In fact, it’s a profoundly irrational stance to take, unless you look at it through the lens of geopolitics.

China imports the bulk of its crude on tankers from the Middle East through two strategic chokepoints: the Strait of Hormuz and the Strait of Malacca. Conflict in either the Persian Gulf or South China Sea could cut off that supply, crippling China’s gargantuan military.

That’s why Beijing is building pipelines through Myanmar, Kazakhstan and Russia, and why the China National Offshore Oil Company is busy drilling. “Large-scale deep-water rigs are our mobile national territory and a strategic weapon,” bragged CNOOC Chairman Wang Yilin in 2012. Oil tankers from Canada are part of that hedging strategy.

Around the world, Donald Trump is seen as proof that America’s century of dominance is ending. Its economy sputtering, its population sick and divided, the once-great superpower now looks a lot like Rome in its bloated, decadent decline. Vladimir Putin is licking his lips. So is China’s strongman president Xi Jinping.

Sure, Justin Trudeau is calling Trump this week, talking about “shared values” and offering to renegotiate the North American Free Trade Agreement. But long-term, it’s clear his government sees greater profit in pursuing ties with China. So if Jim Carr has promised Chinese officials a pipeline, he will approve a pipeline – likely by the end of the month.

That said, approval doesn’t mean it will get built. Stephen Harper rubber-stamped the Enbridge Northern Gateway pipeline in 2014, but between First Nations lawsuits and animosity from B.C. voters, it would now be political suicide to try to push it ahead.

We’re going to do the same thing to Kinder Morgan.

Unlike China or the U.S., Canada still has a relatively functional democracy. We have a constitution that guarantees Aboriginal rights. We have a nonpartisan Supreme Court. We have a democratic majority in B.C. opposed to oil tanker expansion. And we have the right to vote.

I object to Canada’s resources being controlled by foreign countries. I’m tired of hearing politicians repeat talking points from the oil lobby. And I can’t stand watching the mainstream media suck up to both. I’m just one guy in Burnaby, but there are millions of people who feel the same way.

If you’re ready to use your vote to defend this beautiful province, sign our pledge and send a warning to politicians: if you sell us out, you’re going to lose your job. The profits of a Texas oil company and the strategic machinations of the Chinese government do not take priority over our home.

5 Responses to “Will Trudeau cling to Trump … or China?”