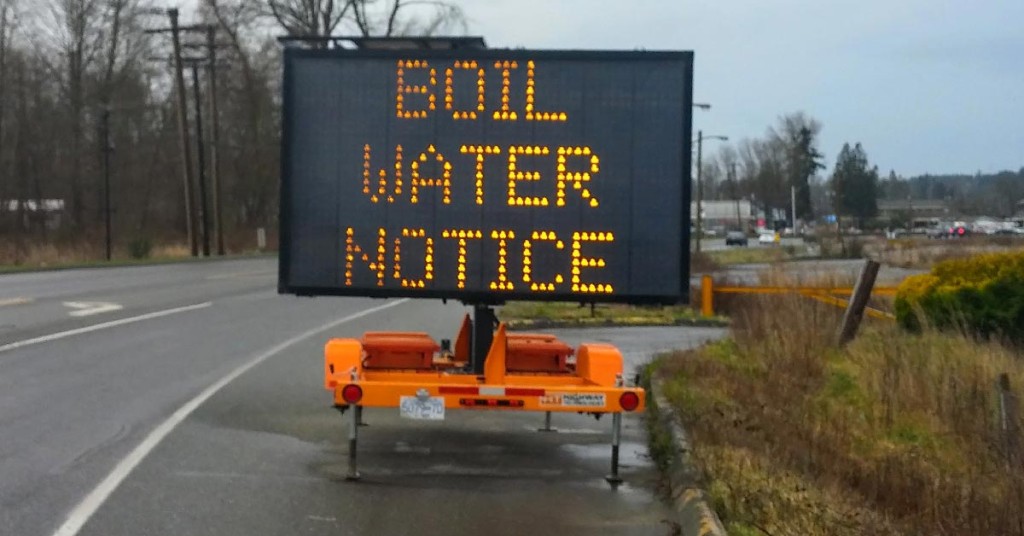 When will the Province step in to protect local drinking water?

*This was originally published on March 10, 2016. Since then, 4 more advisories have left the Comox Valley boiling their water for 40 days. The total filtration system project cost is now estimated at  $105 million.

Don’t mention this to the retirees fleeing Vancouver or Alberta, but along with our beaches, ski hill and fishing spots, the Comox Valley is the largest urban centre in North America now experiencing routine boil-water advisories.

The problem is sediment washing into Comox Lake. The solution is a new municipal filtration system, at a cost to the public of $70 million*. But that doesn’t solve the deeper issue in B.C. of citizens being forced to pay the external costs of private development, either with our tax dollars or our health.

After four boil-water advisories* in one winter here in the Valley, I’m still trying to get my head around why we aren’t in a state of civil unrest over the Province’s failure to safeguard essential water systems — because in case you’ve missed it, freshwater in B.C. is on a losing streak.

Let’s recap: In the Cariboo, the tailings pond failure at Mount Polley sent a river of toxic mud into Quesnel Lake. In Shawnigan, a contaminated soil dump threatens to leach into the town’s water supply. All over the Northeast, billions of litres of chemical-laced fracking fluid is being pounded into the ground with enough volume and force to trigger earthquakes. Seriously.

Promising strong, legislated groundwater protection, the province upped its water price last year for multinational corporations: $2.25 for every million litres taken out of the ground. If water isn’t an issue by the time next year’s provincial election rolls around, I’ll be surprised.

The true cost of destroying a natural asset

Municipalities or Regional Districts supply us with our water, but the Province establishes the framework for how it is managed. The Drinking Water Protection Act sets safe drinking water standards for local water services managers, and local health authorities are tasked with enforcement.

In the Comox Valley, the high concentrations of sediment in the water mean we’re not meeting provincial standards. As noted, the fix is not cheap. Upon hearing the price of a new filtration system, Comox town councillor Ken Grant asked whether the Regional District was in fact ‘over-testing’ its water.

This shoot-the-messenger response is part of an unfortunate pattern: elected officials trying to push the true cost of development down the road.

In this case the ‘development’ in question is being carried out by TimberWest, which is rapidly logging the forests in the watershed. This is possible because the watershed is contained within the E&N Railway grant lands, and is privately held. The story of how this came to pass is told in ‘The Great Land Grab’ (Horter, 2008.)

Along with exporting raw logs and burning slash piles that contribute to poor local air quality, Timberwest took a piece of water-filtration infrastructure that nature provided for us at ‘no charge’ and disabled it. That’s perfectly legal under the Drinking Water Protection Act.

But should it be? Imagine if some corporate entity trashed a municipal asset of comparable value — say a road, or sewer network. My guess is our local politicians would be shoving their way to the front of the line seeking compensation. Yet in the case of TimberWest, it’s the public that pays for the damage.

It’s not just the water that needs filtration

The situation in the E&N grant lands is especially awkward because the pension funds (bcIMC and PSP Investments) of our municipal employees own TimberWest. That’s right, in 2011 the pension funds shelled out just over a billion dollars and bought the logging company.

I’m not aware of any other situation where the profit from the company responsible for clearcutting the region’s watersheds secures the retirement of the people working hard to make our water safe.

There’s another vicious cycle at play: since 2005 TimberWest has donated more than a quarter-million dollars to provincial politicians, who in turn set forest policy and drinking-water standards for local communities.

Look around the province and it’s much the same story. The Truck Loggers Association has chipped in $52,705. Imperial Metals, responsible for the Mount Polley disaster, donated $174,700. Mount Polley Mining Corporation, $52,720. Fracking companies that benefit from cheap water rates, many of them based in Calgary, have pumped millions into B.C. elections.

Unless local MLA Don McRae is able to swim against this tide of corporate money and convince his colleagues to take the Comox Valley watershed out of the E&N grant lands, the next opportunity for voters to be heard on water issues will be on May 9th, 2017.

In the meantime, Comox Valley residents are stuck boiling or buying water — like Nestlé “Pure Life” spring water, sucked out of the ground in Hope, B.C. for $2.25 per million litres and sold for $1.89 a bottle at your local store.

One response to “When will the Province step in to protect local drinking water?”