Why we continue to organize

Four Dogwood organizers reflect on victories and next steps 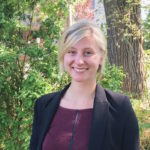 For years I’ve listened to friends, acquaintances and colleagues say “I can feel it: we’re on the verge of a major shift.” They were talking about a paradigm shift to a more just and sustainable society. At first I agreed with them — as I looked around, I saw people in my community seem more and more concerned about our environment and one another. And then my bubble burst. A series of different life experiences lead me to the realize how much context matters. I began to see that much of my understanding of the world is shaped by the different peoples, cultures and access to institutions of which I had come into contact with. These liberties or lack thereof influenced my worldview and it wasn’t until I removed myself from my home that I began to gain a better picture of the complexities that we are confronted with in the face of climate change. So, I became an optimistic skeptic and I continued volunteering with Dogwood.

And now here we are, on the verge of an actual shift. There is a new government that is following through on its campaign promises. This month they announced Thomas Berger, a legendary Indigenous rights lawyer, as intervener for the Squamish First Nation court case and legal advisor for stopping Kinder Morgan’s oil tanker expansion. So, many people may be wondering, why is Dogwood continuing to organize teams in communities across B.C.?

Jane, Maddie and Will are all organizing leaders from different corners of British Columbia. They started volunteering because they were invited, they stayed because their time was used effectively and they keep coming back because of the incredible people who continue to organize with them. That is at the core of organizing: long-term change. Our goal, and the reason why Dogwood continues to organize, is to sustain a growing population of engaged neighbours who fight for the integrity of the air, land and water. This place is home to the diverse peoples who live here and millions of rich ecosystems that in turn sustain us. With our help, they will long outlast any new government.

But just don’t take my word for it. There are hundreds of volunteers all over B.C. who continue to organize one another and build capacity to stop Big Oil and put decision-making power back into the hands of everyday people.

Here are some of their stories: 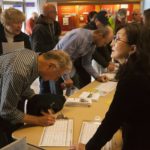 Shortly after the Greens and NDP formed that game-changing alliance, I bumped into one of our staunch canvassers. She said she would drop back from canvassing now as she felt there was no longer a need for it.

Alarm bells went off in my head and I had that gut feeling that this was not the message we wanted getting out there. I too had toyed with the appealing thought of stepping back and putting my feet up after so many years of campaigning, but I soon realized we just couldn’t indulge in that luxury. Too much is at stake here. I had already begun to hear of massive PR campaigns and lobbying that Big Money can buy and knew stepping back is precisely what we cannot afford to do.

Our new government needs us more than ever to support them and push them in the right direction. By continuing to canvass with our new petition, “Thank the new government for vowing to stop Kinder Morgan,” we are achieving three important goals:

1. Showing the government they have public support on this;
2. Holding their feet to the fire, letting them know we are watching and that we need them to keep their promises. We will be meeting with our new MLAs and reporting on the record numbers our canvassers have been pulling in and also showing them the ever-growing number of Dogwood supporters in their ridings; and
3. Continually building and organizing our support base so we are ready to mobilize in electoral contests and can successfully run a citizens’ initiative should the need arise.

At our recent summer events we have been smashing all our previous records for gathering signatures at a one day canvass. The people are so behind this. Kinder Morgan was a big election issue and so many more people are now aware of what is at stake for our beautiful province and for the planet. Let’s keep it on the front burner. Let’s never take anything for granted. The political landscape can turn on a dime. Let’s never assume victory until it is truly done. We must always stand on guard for B.C.

I had vowed to do everything in my power to leave my children a healthy planet. I can sleep at night knowing I am playing my small part in doing what I can. With Dogwood, I have seen and been inspired by the difference we are making! This is why I continue to organize. 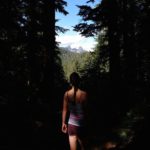 We have a lot of incredible environmental non-profits here in B.C., all serving important niches, and often banding together to fight giants like Kinder Morgan. But the reason why Dogwood stands out for me is the way it so intelligently uses democracy to leverage its campaigns. At no point are volunteers left wondering “How are we going to pull this off?” or “Is this safe/legal?” because Dogwood uses our political system to make clear strategies, and then coaches volunteers every step of the way.

Dogwood has also empowered me. Not only because it taught me about the legal system and politics, but also because it set me up with countless opportunities to actually do something, like meeting my MLA, canvassing, marching or attending free workshops.

This empowerment led me to become the team leader for volunteers in the Kingsway riding. There was no pressure, but because I showed interest, Dogwood trained me in leadership and organizational software, and offered me the opportunity to step up. I’ve been able to apply those skills elsewhere and have been inspired to make suggestions for other groups I volunteer with.

Reading this you may think “Wow, that’s way too much work and commitment for me”, but the way Dogwood organizes, there is a lot of delegation and support. All volunteers help the effort in whichever way suits them best. Whether it’s socializing at a farmers market canvass or doing data entry at home, no single individual has too much to do. Furthermore, team leaders like myself have the continuous support of our awesome regional organizer, Emily, and leadership calls to check in with other teams.

The work is enjoyable because it gives me hope. Hope that there is indeed something we can do, and hope that our campaigns can experience “wins” as we’re now seeing Dogwood’s impacts on our provincial government. Thank you Dogwood.

I hope anyone reading this is able to find their place among the millions of hands pushing in the right direction. 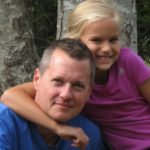 Are we done? With a more responsive government in Victoria can we all just take a break and regroup sometime next year?

No, not even close. I see two big reasons to keep the pressure on.

First, while the new government’s decisions on Kinder Morgan were a welcome step forward, this government hangs by the thinnest of threads. A single seat majority is as tight as things can get in a parliamentary democracy. And you know that the folks who brought us 16 years of mismanagement and pay-to-play politics would love to get back behind the wheel.

Up in Courtenay-Comox we are well aware that it was a tight election. And that’s why we are organizing as hard as ever. When we canvassed at the Comox Valley Farmer’s Market this B.C. Day (#StandUpforBC), people spoke with a cautious optimism. People can see that the policy gains we have made are real, they are important, and they are worth raising a glass to. But there is a clear awareness that it could all be lost in a single snap election — if we don’t keep up our fierce, issue-based organizing.

Secondly, the people I met on B.C. Day also spoke passionately about the smoke that hangs in the air across the province and the raging fires in the interior. These fires, the record-breaking temperatures and the outrageous denialism of President Trump continue to focus public attention on climate change. This is the second reason why we need to keep connecting and organizing – we have a real opportunity to build on this awareness. We need to make the most of this strong uptick in public concern.

On a more personal note, I was fortunate enough to be selected to attend a Climate Reality Leadership Training hosted by Al Gore in June. During the training in Seattle I learned skills and strategies for effectively communicating about climate change. I look forward to sharing them with interested groups around the Island (feel free to contact me if you are interested). I am giving my first climate change presentation/skill share next week – to my local Dogwood team, of course.

Let’s enjoy the best of a B.C. summer. And let’s keep building the momentum of change.

2 Responses to “Why we continue to organize”