Whose pipelines are these, anyway?

Posted in Commentary, No Tankers, Stand Up To China

“Oil to tidewater.” It’s an industry mantra happily adopted by politicians – and even some environmentalists. But ask yourself this: what happens when you pump more product into an oversupplied market? Answer: the price goes down.

Let’s address each of these political talking points in turn.

The first thing to remember is that pipelines don’t magically add value to crude oil. What they do is reduce transportation costs from point A to point B, allowing the seller to pocket a few extra dollars per barrel.

The real problem for Canadian oil sands producers is that prices all over the world are low. If oil is selling for $45 and it costs you $46 to dig up a barrel of oil, no pipeline can fix that.

Worse, we’re talking about heavy oil sands bitumen, which is worth even less than the global “price of oil” you see quoted in the newspaper.

That’s because oil sands crude is heavy, sticky and high in sulfur, which means you need more lube to get it through pipelines and special refineries to turn it into gasoline.

Most refineries in Canada are not set up to chew through heavy oil sands bitumen. It would be like trying to fuel up your grocery getter with creosote: bad idea. So we export this low-value crude, mostly to the United States, while importing lighter crude and fuel products.

For a real comparison, we have to look at another sea-traded heavy crude. Mexico has a blend comparable to oil sands bitumen called “Maya”. The Alberta finance department tracks the average price spread between the two in a graph they update every month.

Canada is the blue line. We’re chasing the green line: 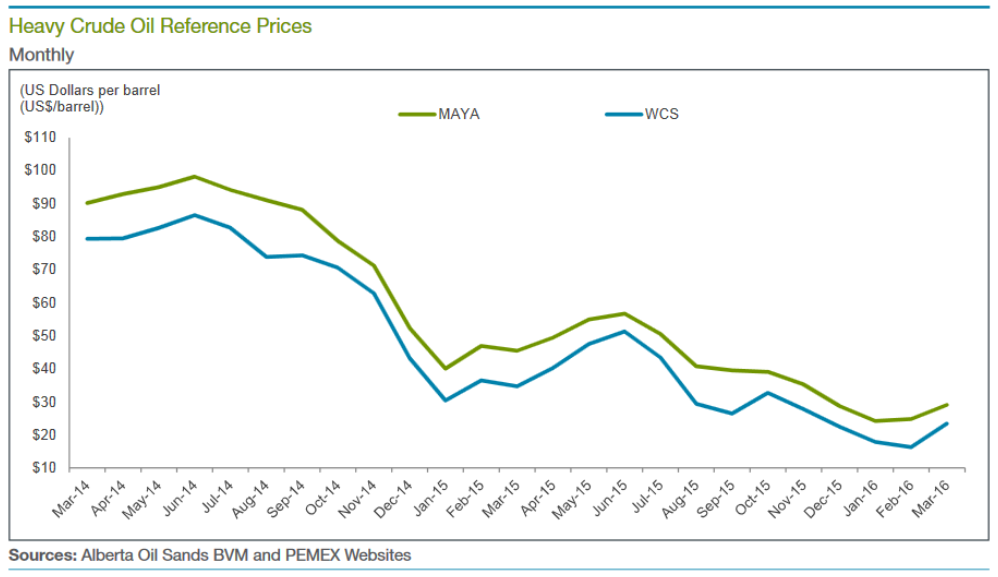 What would happen if oil sands producers hit their expansion targets, and put all that heavy crude on tankers?

The current oil price slump, which you can see started in summer 2014, was triggered by an oversupply of global markets. Oil producers were pumping out about two million barrels per day more than people needed.

“We’re in favour of all pipelines, to be honest,” Alberta energy minister Marg McCuaig-Boyd told the Edmonton Journal in April. “We see the need for more than one pipeline, and what helps one will help another.”

If the Alberta government could wave its magic pipeline wand and build all three of these projects, 2.5 million barrels of heavy crude would flood overseas refineries. With demand growth slowing, this would put downward pressure on prices.

Subtract the corporate welfare our governments give to oil companies, the billions in damage caused by climate change and the public cost of oil spills. Imagine for a minute the oil companies get their way and sell a whole bunch of crude in Asia at rock-bottom prices. Who benefits?

Not British Columbians, that’s for sure. We get no royalties and not even a guarantee of temporary construction jobs.

The federal government might at least break even, by collecting more income tax from oil workers.

The Alberta government has given itself no other choice. With no sales tax and an electorate hostile to tax in general, Albertan politicians depend on whatever oil royalties they can get to pay for social services.

The real winners would be the state-owned refineries in China, which would get a reliable supply of cheap feedstock. That’s why the government in Beijing has been pushing for these pipelines for 10 long years. And sourcing that crude from Canada would come with a strategic geopolitical bonus.

The majority of that is imported through two geographic choke points: the Strait of Hormuz and the Strait of Malacca. That makes China’s rulers nervous, which is why they’re expanding overland oil and gas pipelines — and looking to Canada as a future supplier. 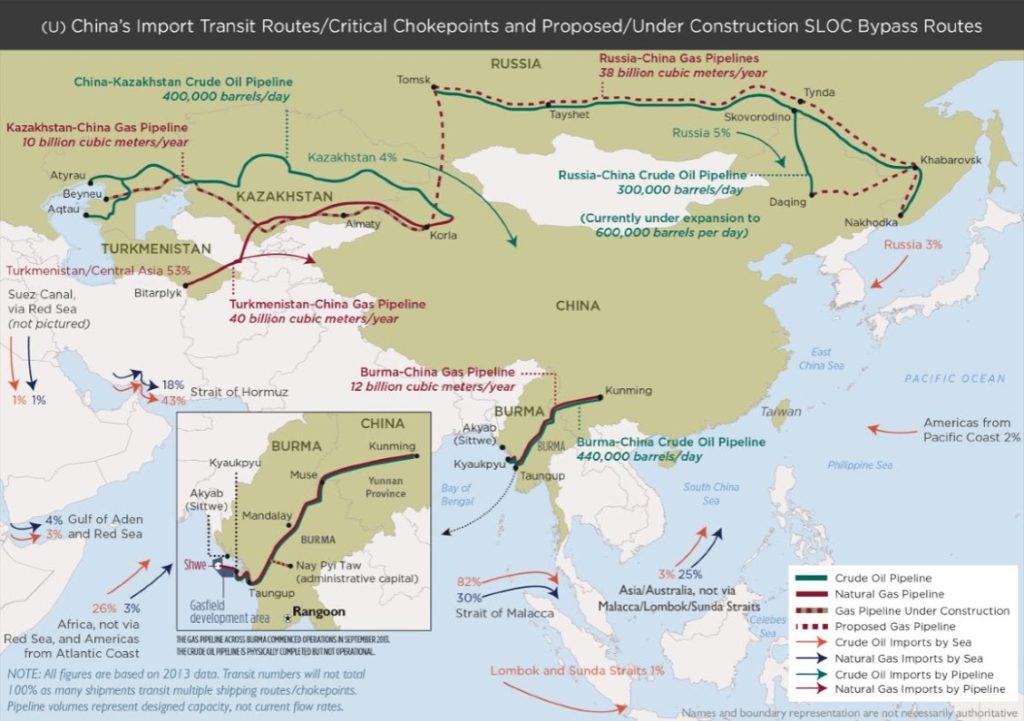 We could help ease China’s reliance on those contested shipping lanes, but it appears increasingly doubtful prices will climb again to the levels that had oil producers rubbing their hands at the prospect of West Coast exports.

In 2012, the pro-pipeline Fraser Institute predicted the Enbridge Northern Gateway pipeline would allow oil producers to make an extra $2.50 more per barrel  than if they sold in the U.S. Yes, that’s the pot of gold at the end of the “tidewater” rainbow: a toonie and two quarters per barrel.

Since then the pace of growth in China has slowed while global oil supply has expanded — thanks in part to fracking technology. More worrisome, from the perspective of Canadian oil companies, is the strategic shift by Saudi Arabia.

The end of the Oil Age

“The Stone Age did not end for lack of stone, and the Oil Age will end long before the world runs out of oil.” That prophecy came from the Saudi oil minister, Sheikh Zaki Yamani, in 1973.

In February 2016, Yamani’s successor took the idea a step further. Ali al-Naimi told a crowd of oil executives in Texas why, despite low prices, his country refused to turn off the taps: “We’re going to let everybody compete.” Addressing investors in high-cost deposits like the oil sands, al-Naimi said “inefficient, uneconomic producers will have to get out.”

The Saudi regime slaughters its own citizens and harbours religious extremists. It is, by all metrics, repressive, brutal and corrupt. But when it comes to the realpolitik of oil markets, the Saudis have an advantage. They can pump it out of the ground cheaper than anyone else.

With climate treaties coming and electric transport set to cut into oil demand, the Kingdom is not counting on the return of $100 prices. Instead, it’s planning to crank up production even further, to wring every last drop out of the sand before the rest gets locked underground forever.

What’s becoming clear is that Canada is pursuing the same strategy, despite having a product that costs more to dig up and sells for less.

Under relentless pressure from oil lobbyists, politicians of all ideological stripes have accepted the industry’s logic: just pump more crude and pray for higher prices.

Let’s get real. These pipelines are not nation-building projects. They are catheters designed to drain a giant pool of carbon as cheaply as possible, so oil sands companies can keep the lights on for a few more years.

The irony is that flooding the market with cheap crude would make it less likely for prices to recover. That’s fine for the Saudis, who are happy to compete in a low-price environment. But it’s a poor long-term strategy for Canadians.

Approving Enbridge or Kinder Morgan’s oil tanker terminals will lay the path for a furious final expansion of the oil sands, before creditors stop lending money and the heavy-oil producers start going bankrupt.

We can’t change the end-times mindset of the global oil industry. But we can give our politicians a reality check.

Sign up to vote “no” to oil tankers: LetBCvote.ca

4 Responses to “Whose pipelines are these, anyway?”

Liberals move to outflank the NDP on green issues

John Horgan, Rachel Notley make things awkward for federal New Democrats When Justin Trudeau was asked by a reporter why he dodged Indigenous youth who traveled from Fairy Creek to one of his photo ops, the Liberal leader didn’t answer the question. “We recognize there’s a real issue here locally around old growth forests, and […]

What if B.C. had its own Climate Defence Force?

July 2021 is a good month for international cooperation in the face of the climate crisis  Last weekend a battalion of Mexican firefighters touched down into the inferno that has become the interior of B.C. They’re already on the frontlines in Osoyoos battling one of 250 fires across a province which has called fire-related states-of-emergency […]

On the road, record temperatures remind British Columbians how far we’ll have to travel to get past denial. Most every year, in the last few weeks of spring, I head into one of my favourite places in B.C. – the high country above the Thompson River we call the Bonaparte Plateau. Tucked away among hundreds […]