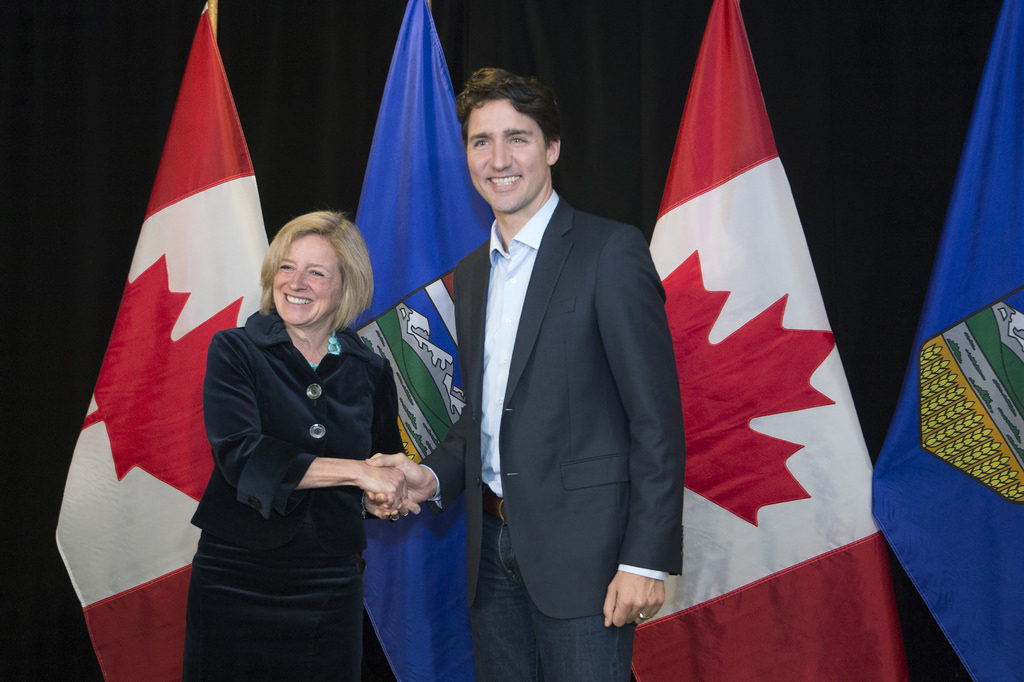 For which nation and in whose interest?

Don’t be fooled by the “national interest” narrative. Trans Mountain’s expansion is for the one per cent.

In my 43 years living in this great country, I have never seen so much meddling into the affairs of a province as the full frontal assault taking place against the soon-to-be-sworn-in government of B.C.

Let’s be clear. Fifty-seven per cent — an overwhelming majority by any provincial standard — voted for Green-NDP platforms and voted to break away from 16 years of unchecked rule by political elites who have been fuelled by Big Money and Big Oil.

Alberta, the province that excoriated a National Energy Program and held Canada hostage before joining a (yet to be implemented) plan for reining in runaway climate pollution, are calling the policy decisions of another province attempting to protect its own economy “unlawful” and “obstructionist”, and saying to the rest of Canada about B.C. that the Kinder Morgan expansion is “not their decision to make.”

So far no fewer than three federal Liberal cabinet members have intervened. The rest are peddling Kinder Morgan’s review and approval process as independent (it was not), based on science and evidence (neither climate impacts nor health impacts were considered) and are maintaining that the project is in the “national interest.”

I have a couple of questions about this last Liberal talking point. For which nation, and in whose interest, are we referring to when we talk about Kinder Morgan’s expansion? Because the way I see it, allowing a Texas company to a) threaten the economy of B.C., b) open a strategic reserve of oil to a hostile foreign power, c) ship Alberta’s resources offshore without refining them and, d) radically increase Canada’s emissions footprint, is only in the interest of those who benefit from these actions — Big Oil and the one per cent. It’s not in Canada’s interest and certainly not in British Columbia’s.

However, before I address this further, let’s collectively shudder with contempt as Alberta’s Progressive Conservative, Wildrose and NDP politicians, along with once independent-minded and principled columnists, find themselves pledging undying allegiance to the power of the feds.

Treading on the rights of another province to decide its own energy future is entirely inconsistent with the Albertan view of the world — you can either subscribe to a National Energy Program that collectively invests in the development and transhipment of fossil fuels and shares in its wealth, as Norway has done, or you can go it alone, which Alberta has.

Like a deathbed conversion, they now swear Ottawa has not only the legal, but moral authority to tread on the provinces. If there was one thing our two provinces in the West had in common it was this: a healthy and well-founded skepticism of federal over-reach within our constitutional arrangement. Alberta, you have betrayed us. Plan your next vacation in the Cypress Hills.

There are more Nations to be considered than just Canada

In this unfortunate scenario where Trudeau and Notley attempt to brand themselves climate leaders by building pipelines, “national interest” once again becomes a constitutional powerplay, pitting the interests of the wealthiest Canadians against the poorest.

The supposedly clear cut case of federal jurisdiction upheld in Section 92 starts to unravel if the government doesn’t have title to the land. This is the “problem” in B.C. and one that does not resolve itself quickly as I’m sure Trudeau and his cronies would like it to.

It has taken 41 years to transit between the Calder and Tsilhqot’in decisions in an upward trajectory of ever-increasing jurisprudence that unequivocally states that B.C. First Nations, in the absence of treaties that extinguish them, retain their Section 35 rights.

Albertans (and many British Columbians) do not realize there are 61 First Nations currently participating in modern B.C. treaty negotiations. In the last two decades only four have been completed. Those 65 who have chosen to participate represent only 104 of the 203 Indian Act Bands in B.C. This means there are dozens and dozens who are not yet at the table. The decisions, therefore, about who owns the land on the proposed pipeline route have not been made. Reconciling this reality could take many, many more years.

Protecting Canada’s big banks from stranded-asset exposure is not an excuse to declare a project in the national interest. Canada’s six big banks carry roughly $107 billion in oil and gas debt. After Big Oil, these banks are the most active lobbyists on Parliament Hill.

Trudeau’s mantra on Kinder Morgan these days is “facts and evidence.” The fact is the Big Six are over a barrel to oil and need a pipeline to guarantee their loans. The evidence for all to see is in the lobbyists’ registry where they rank second (behind, you guessed it, oil and gas) in meetings with the federal cabinet. If you want to see their positions on another national interest project, like protecting Canada from runaway climate change, see this recent piece in the National Observer.

If there is a national interest, it belongs to China

China, if it is anything, is a Pacific power. Constrained to the north by Russia, the west by Europe and the south by India, the only place China can count on — the only space it can control — is the Pacific. In fact, China’s military modernization is all about the Pacific. Its stealth ship-killing cruise missile technology, its growing fleet of native aircraft carriers, its manufactured islands, are all projections of power into the theatre it regards as the utmost of strategic importance.

The irony of China’s desire to acquire a strategic oil reserve via Kinder Morgan is this: it’s exactly what the Trans Mountain pipeline was built for in the first place. During the Korean War the U.S. military realized it needed a North Coast oil supply. Alaska’s oil reserves, which were as of yet undeveloped, were too close to Russian medium range air defences. California’s refineries were too far south. Trans Mountain, lying in the radar and missile defence shields of NORAD, was purpose-built to ensure adequate supply should military conflict break out in the Asia-Pacific theatre.

Ironically, the good folks at The Rebel along with all of those communist-fearing conservatives from Alberta would be happy to see China handed the strategic military oil reserves it desires just as long as those stocks continue to rise.

Extending a nation-building hand to the one per cent

And speaking of stocks, the strongest proponents of this national interest charade are, of course, its real beneficiaries — Canada’s wealthiest people who hide behind public facing policy institutes like the Canada West Foundation and the Canada China Business Council.

The Canada West Foundation is a think tank financed by, amongst others, the legacy funds of apartheid supporter Arthur Child, Enbridge, the governments of Alberta and Saskatchewan, tar sands financier Murray Edwards, Canadian Western Bank, the Port of Vancouver and Canadian Natural Resources Ltd. The Canada China Business Council represents the CEO’s of big Canadian energy and engineering firms hoping for market access to the world’s soon-to-be largest economy.

These high-minded people push the narrative that Kinder Morgan’s project is meant to benefit all people through their Postmedia and Thomson interlocuteurs. The rich writing for and about the rich — how nice.

By any objective measure, Kinder Morgan is not about national interest. Further, it’s not going to be decided in a long, drawn out constitutional battle over federal-provincial jurisdiction. The decision to approve this doomed project always was, and remains, a political one. And because it’s a political decision, British Columbians retain the power to influence our politicians to stop it.

And when Trudeau’s administration becomes the fourth government — after Harper, Clark and Notley — to fall by supporting it, hopefully those facts will be the only evidence any other contenders weigh when they decide whether to pick a fight with B.C.

8 Responses to “For which nation and in whose interest?”