I remember when I first found out about Kinder Morgan’s Trans Mountain pipeline expansion. I was working in Surrey and someone mentioned its proposed path ran through Surrey Bend Regional Park.

When I traced it on a map, I realized the pipeline would go right through my own neighbourhood in North Langley. The proposed route would run down the other side of the road from my house. I was shocked. I couldn’t believe that nobody had told me.

When I went to Trans Mountain’s open house in Langley, I asked the staff why I wasn’t informed it would be so close to my house. Their response? “We only have to inform property owners that the pipeline directly affected.”

I’m sorry, what? You won’t be trenching my yard, true. But this pipeline will affect all of us.

I felt angry. I felt powerless. I felt alone. And at first, it seemed like none of my Langley neighbours knew or cared about this.

I have spent the past two days at the Ministerial panel meetings for Kinder Morgan in Langley. During these two days, I heard from Kwantlen and Tsawwassen First Nations, City of Surrey and Township of Langley government representatives, environmental groups, labour unions and business owners.

However, the most impactful, compelling moments were in the public town hall. For over four hours, Langley and Surrey residents rose to share their stories, their fears and their dreams. 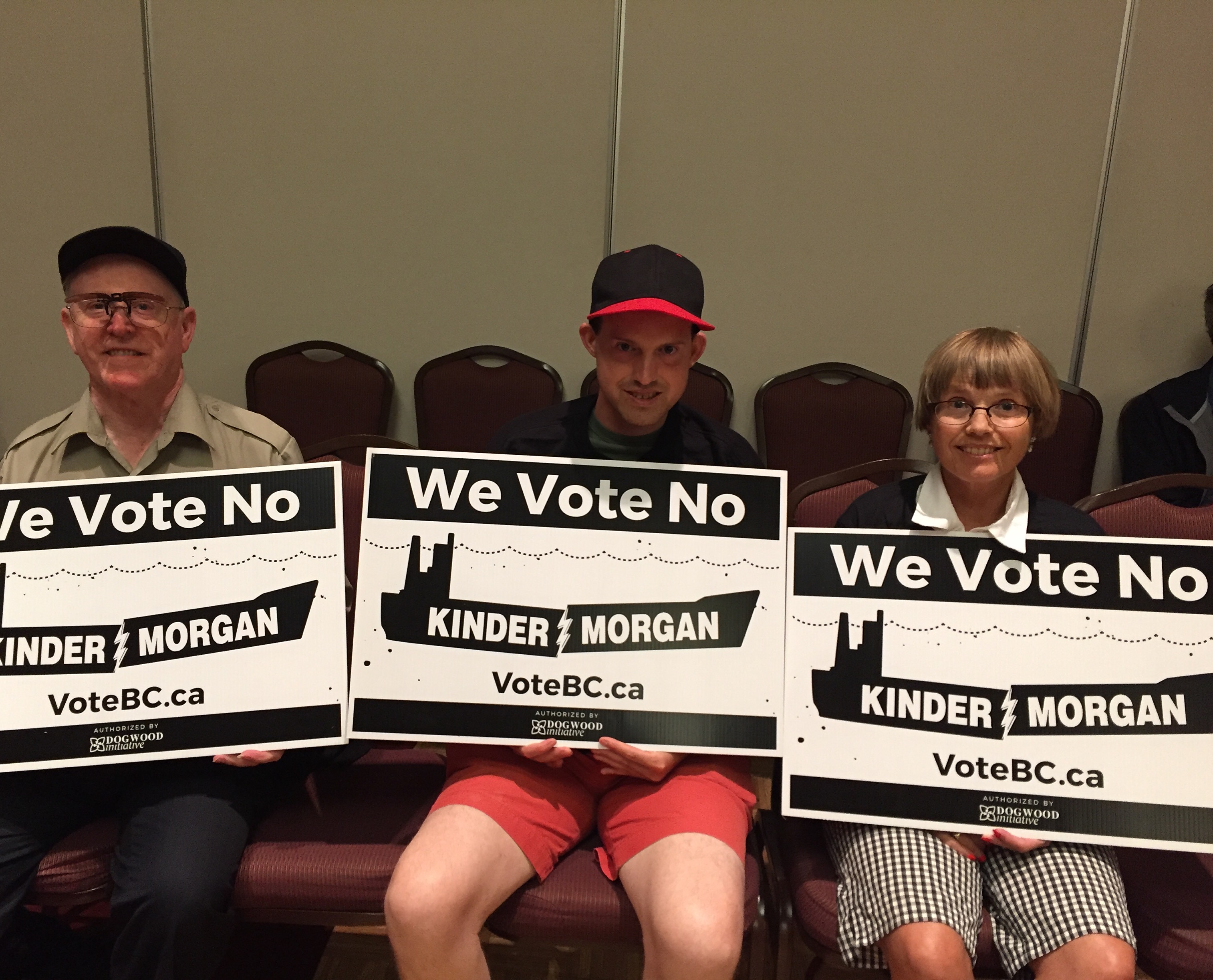 “I head to Vancouver Island to go fishing this weekend. We go on this long weekend each year. Years ago, the salmon were more prolific. I wish I could say the same for the fishing future of our grandkids.” – Larri, Langley

“It’s a horrible thing to get a phone call from someone you know saying, ‘I didn’t know you supported pipelines.’ Kinder Morgan never addressed us. We had to reach out to them.” – Byron, Fort Langley (one of the proposed routes for the pipeline crosses his farm)

“Sometimes we had leaks in the pipelines. They were corroded, and close to the ocean. We had to clean up spills that covered hundreds of acres. It’s a horrible task. It invades the lagoons, the beaches. I worked in oil almost up to my neck.” – Marco, oil field worker in Mexico.

“I want to take us back to last year on April 9. I woke up to my phone ringing and my friends were saying, ‘There is an oil spill’. My heart sank. For two years I had been fighting.

It was really devastating. I saw birds cleaning themselves. I saw rocks with oil coming in on the tide. Many of my indigenous sisters were crying. The saddest part was that the oil response was zero. Three days later there were signs warning the kids playing to stay off the beach.” –Shirley, Burnaby

“The headline from 2014 says: ‘Kinder Morgan says oil spills will be good for the economy.’ Tell that to the 70,000 people in Saskatchewan who have to deal with this.” – John, Langley

“I no longer trust the government, the NEB or oil companies themselves. I no longer believe that they have Canadians interests at heart. Nor do I believe that the world’s highest standards can come close cleaning up a spill.” – Vicki, White Rock

“We are responsible for stewardship. If we allow this pipeline to go ahead, we will not be acting as a steward of this earth. The love of money is the root of all evil. Not money itself, we all need money to buy our daily bread. The love of money. Is it worth risking this for the love of money?” – Reverend Paul, Langley

“Fishing is the chance to wash one’s soul with pure air… It brings meekness and inspiration… It is a discipline in the equality of men – for all men are equal before fish.” – Neville, quoting Herbert Hoover.

“I want to ask the parents here, would you let a repeat offender babysit your children?
My generation needs you to not let them destroy the world. My peers and I will be thriving on your legacy or be left to clean up behind.” – Avery, Surrey high school student

“I wasn’t going to come here. I have spoken at so many of these. So many unbelievably intelligent people have spoken with their hearts, their minds and their spirits, but the same answer always comes back. But, I can’t hold my grand daughter without speaking up for her future.” – Susan

“When I was coming here today, a young man sat beside me on the bus. I asked him: ‘What do you think of Kinder Morgan?’ He said: ‘It’s too risky. There are short-term risks to our water, our salmon, our wildlife. And there are long-term risks, climate change. Who will pay or this? Do you think it will be the oil companies? I don’t think so. It’s going to be you and I.’” – Barbara, Surrey

“Economics means ‘management of the household’. So, what is the household? It is a tiny blue dot on which we exist.” – Michael, Surrey

“Please tell cabinet: We need to change if we are going to survive. The stone age didn’t end because we ran out of stones.” – John, Abbotsford

“This is the first time I’ve been to a town hall like this. I grew up on the Sunshine Coast and lived in B.C. for most of my life. The ocean has always been a special thing to me. Pipeline supporters won’t even call it the ocean, they call it tidewater.” – Luke

“Everything is interconnected. We all have stake in this. It’s not just one company who wants to make some money. It’s everybody.” – Jan, Langley

If this is sounding pretty one-sided, I’ll offer a point of clarification: the room was overwhelmingly against Kinder Morgan’s project. Out of the 35 speakers, 33 were against it.

“I have lived in the Lower Mainland my whole life. To say that I am attached to this coast would be an understatement. This coast is a part of me.
I’m very angry. I’m angry because I’m one of the young people who voted for Trudeau, optimistic that he would make changes. But, my anger stems from fear for what the future holds. My message for Trudeau is this: This pipeline will not go through.
Transition is not a choice. A new pipeline is not an option. And, you can put in your report that we will not allow this pipeline to be built.” – Justine, Surrey

My neighbours know and care about  this issue. We are angry. But we are not powerless, because we are not alone.  And neither are you.

The final speaker of the public participation evening, Chrisanna, summed up the day simply and eloquently:

One response to “What really matters”