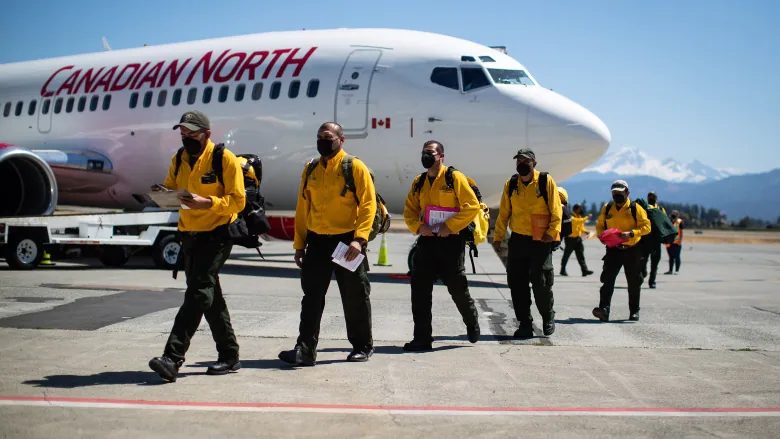 What if B.C. had its own Climate Defence Force?

Last weekend a battalion of Mexican firefighters touched down into the inferno that has become the interior of B.C. They’re already on the frontlines in Osoyoos battling one of 250 fires across a province which has called fire-related states-of-emergency in three of the past five years.

Radically warming air and ocean temperatures are attacking the foundations of human and natural systems. Too many are buckling, alarming scientists who have spent decades modelling the impacts of our disastrously selfish decision making. The long forewarned tipping point is here, and as 2021 has shown, it’s one emergency after another.

No country is an island. We’re part of a global community that can offer strength when we have it and accept help when we need it. But the climate crisis is here to stay, and nobody knows better than us how it will impact our home. The time has come for citizens to consider forming a Climate Defence Force to keep our communities secure. Here’s why.

The fires awakened us

In 2017 B.C.’s  largest fire raged across the Cariboo Chilcotin. It was unlike anything anyone had ever seen. It moved so fast wild horses were burned alive, and so deep root layers holding hillsides together were incinerated.

To save lives, the province ordered the evacuation of the 1,000 strong Tsilhqot’in Nation. However almost a third remained, many of them experienced wildland firefighters. To them, the risk of losing the land and animals that shape their identity was greater than the risk to their lives. So, in an act of bravery and determination, they stood their ground and fought. 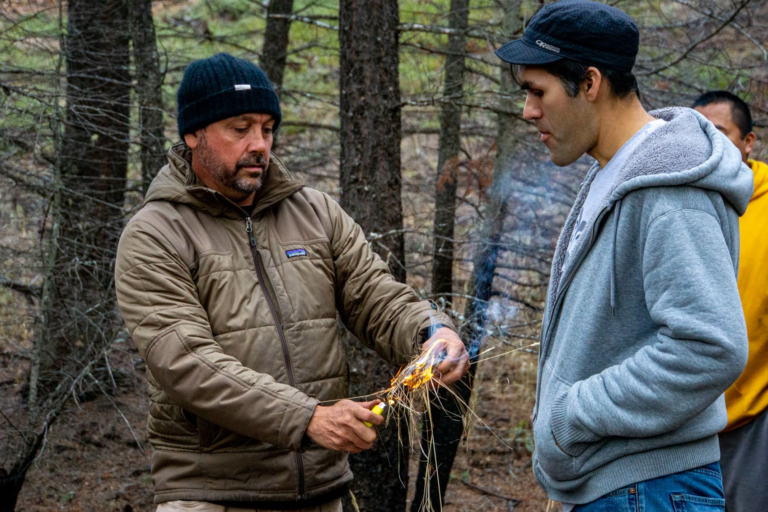 Victor Steffensen, left, will return to the Tsilhqot’in Nation for several years as part of a pilot project to revive cultural burning in the region. Photo: Ngaio Hotte

In the aftermath, the community put forward thirty-three calls to action in their 2020 report “The Fires Awakened Us.” When people holding thousands of years of intergenerational knowledge know the time has come to pivot, the rest of us should pay attention. The first recommendation, to “develop a centralized Indigenous-led Emergency Centre in Tsilhqot’in territory with satellite sites at each community with advanced safety and emergency equipment” is both a straightforward and profound response.

This spring Tsilhqot’in members were out on the land implementing phase 6 of the revitalized traditional burning program. In contrast, the “Preliminary Strategic Climate Risk Assessment for British Columbia,” just one of three reports written over the past decade predicting the deadly consequences of climate change, sat on the shelf as the heat dome settled in and the fires began.

Instead of waiting for a provincial government with no track record on climate, it’s time to follow the Tsilhqot’in’s lead. There’s simply no downside to building community capacity, investing in skills training and getting neighbours together to imagine how to face the cascading heat, flood, sea-breach and storm events heading our way.

Mutual aid for our home

Most settlers who come to love our home province did so by interacting with its wild spaces. So it stands to reason that our oldest organizations are outdoor clubs. Like the Kelowna Fish and Game Club which formed in 1904. Or the Omineca Ski Club which started in Burns Lake in 1927. People who first ventured out for the thrill of the hunt, or the glory of accomplishment, stayed for the sense of identity. And many decided to give back.

Where I live, local fish and game clubs restored populations of Roosevelt Elk across the Island and brought salmon streams decimated by government sanctioned logging back to life. When they, or the people following in their footsteps have an accident or get lost, volunteer Search and Rescue teams step in to rescue them.

I asked SAR volunteer Jamie McCue why he decided to join Comox Valley Search and Rescue, an organization serving the community for 40 years. “The bottom line is I care about where I live. I can handle myself outdoors. I want to see people continue to enjoy our wild spaces — because when they do, they’ll learn to care about them. To the extent I can make that experience safer for people, or step up and help when something unforeseen happens, it’s how I can give back to a place that has given me so much.”

The tradition of civilian environmental defence

BC Search and Rescue provides one model for what an effective Climate Defence Force could become: volunteer led. Serving 79 different communities. 3,000 volunteers responding to 1,900 incidents a year.

Another are Indigenous Guardian programs which steward the relationship between humans and plant and animal communities up and down the coast. The third model is found in NGOs like Dogwood who organize people of shared values to achieve a common purpose.

These civil society institutions are orders of magnitude more efficient than their counterparts in government and industry which rely on either huge budgets, unresponsive bureaucracies, or in the case of military and police — both. 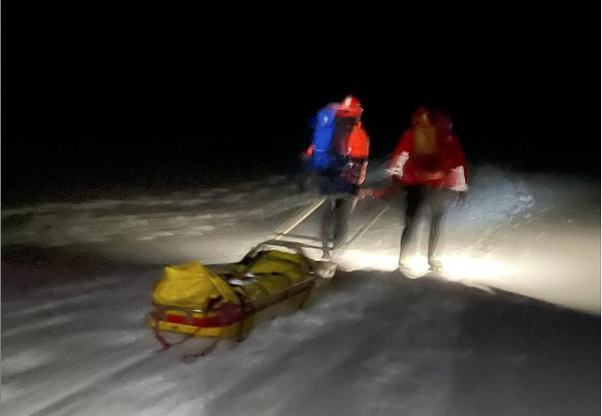 We’re entering an era where the distinguishing features of our identity are in grave danger. A volunteer led Climate Defence Force (BCCDF) would bring together everyday British Columbians who put community before profit. And it could grow strong enough to not only fight the impacts of climate change, but also stand down British Columbia’s “resource managers” who relentlessly push the B.C. wilderness, our ultimate climate regulator, to the brink.

Environmental defence forces will never replace highly valued professional firefighters, paramedics or SARTEC’s, nor defend our country in a war. Instead, well-organized people who love their homes would become invaluable partners, possibly leaders, of the community-level response needed to meet the climate crisis.

More importantly, BCCDF’s very existence would send two clear, overdue, and so far unheeded messages. The first, to our fellow community members who simply didn’t know (or care to know) what the climate crisis was going to look like: there is an opportunity between denial and hopelessness where you can take a stand for this place, and return to it what you owe for the opportunity of living here. Your membership can be a show of gratitude for what this land has given to you.

Second, to the politicians of British Columbia who were so busy trying to greenwash the climate crisis away they didn’t realize it was here. Those hundreds pushed to an early death by lethal heat? Every elected member of the governing party, and the party in power before it, is responsible.

The very presence of the CDF would force a reckoning with organized people willing to put their all in the fight for a safer future. If the practice of giving hundreds of millions of tax dollars to the oil and gas industry causing our province to burn continues, we won’t even leave them a corner to back out of.

We don’t know what our future holds, only that we’ll look back on these last two years of near perpetual states of emergency across the globe as the time when we still had it relatively easy. Yes, in the coming decade we’ll catch a few breaks. We’ll have months, maybe even a few years when things feel normal. Extraordinary plant and animal communities will prove surprisingly resilient. Denialist human communities will prove stubbornly resistant.

As I write this, fire has yet to visit my home. However, the entire lineage of genetically distinct salmon who have been coming here since the Ice Age are about to blink out, extinguished from Washer creek, which is days away from running entirely dry.

Without much trouble I can list what our community needs. Backup reservoirs for fires and fish. Cooling centres. An electric heat pump in each home, which doubles as an air conditioner in hot weather. Safe paths for active transport. Immediate consequences for emissions. An end to the raw log harvesting frenzy. Intensive reforestation so our soils can hold moisture. Relocation of flood-prone homes, like some in the K’omoks First Nation.

When viewed through the lens of what our community could start on now to make the climate crisis more survivable, those outcomes sound less like intractable problems and more like opportunities to create hope in the face of uncertainty.

I believe many can imagine similar solutions that fit where they live. And given the non-response to the climate emergency from the government to date, I wouldn’t at all be surprised to see people willing to put energy and leadership behind an idea like this. In 2017 as the fire licked at his heels Chief Joseph Alphonse put it this way “We’re going to fight for our property. In the end, maybe we’ll lose a lot. But we’ll take comfort in knowing we did everything in our power to prevent it from happening.”

2 Responses to “What if B.C. had its own Climate Defence Force?”