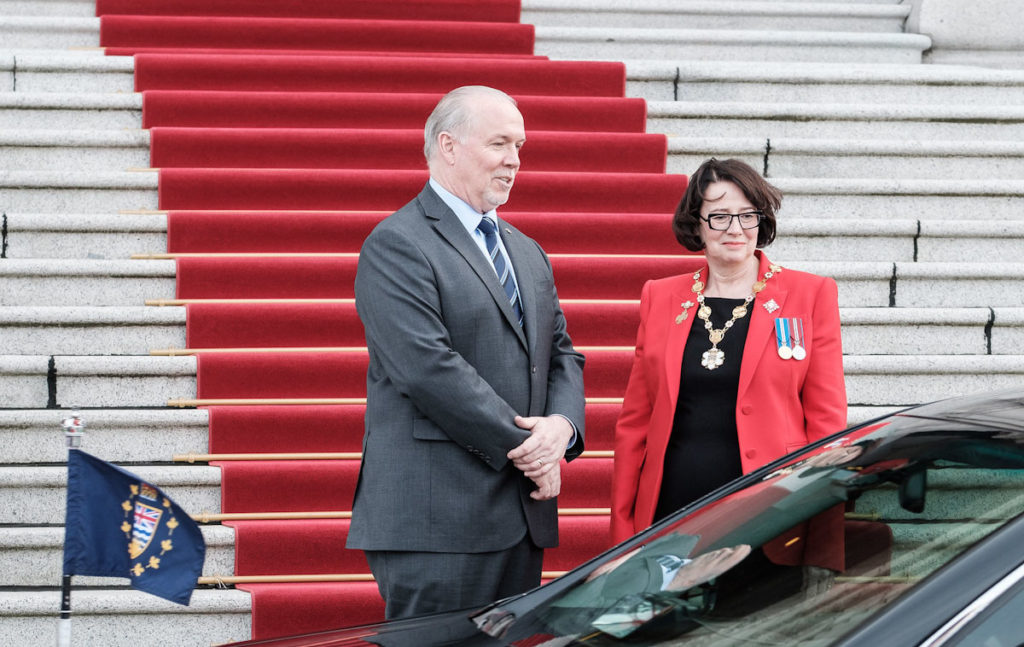 Wet’suwet’en raids spell trouble for the BC NDP

Like Idle No More in 2013, the battle for Wet’suwet’en land has set events in motion no government can control

“Nonviolent direct action seeks to create such a crisis and foster such a tension that a community which has constantly refused to negotiate is forced to confront the issue.” Martin Luther King Jr. wrote those words from a jail in Birmingham, Alabama in 1963, but his words still resonate in B.C.

When Premier John Horgan refused to negotiate with Wet’suwet’en hereditary chiefs, he set off a chain of events that force us to confront the issue underlying everything else in this province: who decides what happens on Indigenous land?

Dozens have been arrested on Wet’suwet’en territory and around the province, after solidarity blockades went up on neighbouring Gitxsan territory, at the Port of Vancouver, the Deltaport causeway and the B.C. legislature.

Public opinion is probably against these economic disruptions. Commuters hate being held up in traffic. And polls show most British Columbians support LNG development (so long as nobody says “fracking”). But if this continues to escalate, those may not be the voters the NDP needs to worry about.

Memories of Idle No More

Yesterday the RCMP chainsawed through a gate at the Unist’ot’en healing centre painted with the word RECONCILIATION. The police interrupted a ceremony for missing and murdered Indigenous women and girls – to put Wet’suwet’en matriarchs in handcuffs. Two thousand kilometres away in Winnipeg, supporters formed a circle and began to dance.

I haven’t seen this kind of gathering in Portage Place since 2012 ✊🏻🤩 #WetsuwetenStrong #ShutDownCanada #Winnipeg pic.twitter.com/Ojb0KE9OUQ

Rallies, office occupations and blockades have popped up in dozens of communities. It’s the kind of spontaneous, distributed action this country saw in the winter of 2012-13, when the Idle No More movement swept across Turtle Island.

After the Stephen Harper government introduced an omnibus budget bill to remove protection for lakes and rivers, four women in Saskatoon organized a teach-in.The event snowballed, sparking a national day of action. Theresa Spence, chief of the Attawapiskat First Nation, started a hunger strike in Ottawa.

That winter the seeds were sown for the Harper government’s eventual downfall. Savvy politicians, including Justin Trudeau, visited Chief Spence in her teepee. Soon, their rhetoric began to change.

Trudeau embraced a political program based on “reconciliation,” “nation-to-nation relationships” “evidence-based policy” and “climate action”. It carried him to a majority government in 2015. And John Horgan used parts of the same playbook to edge the BC Liberals out of power in 2017, with help from the BC Greens. But rhetoric only gets you so far.

A history of enforcement

Younger British Columbians, or recent arrivals to the province, may not remember that the BC NDP oversaw the largest mass arrests in the province since World War II. The Clayoquot Sound blockades were the culmination of decades of effort by the Ahousaht and Tia-o-qui-aht nations to slow old-growth logging on their territories. In the summer of 1993, more than 900 supporters were arrested by the RCMP.

Two years later, a group of Sundancers at Gustafsen Lake got an eviction notice from a white rancher who held a crown grazing lease in the area. The Indigenous spiritualists maintained that it was unceded Secwepemc land. An armed standoff ensued. The RCMP brought in 400 tactical officers, blew up a supply truck, shot the camp dog and fired more than 7,000 bullets in a series of skirmishes that miraculously left only one person injured.

Some things have changed. The land defenders on Wet’suwet’en territory are unarmed, and have taken pains not to threaten police. Social media and camera phones have changed police tactics. But when companies demand access to Indigenous lands, this government has proven all too willing to defer to police and industry, just like in the past.

A taste of things to come

People waiting for the unrest to taper off may be waiting a while. This month North Vancouver MP and federal environment minister Jonathan Wilkinson is likely to approve Teck Frontier, the largest open-pit oil sands mine in history. Key to the Liberals’ oil sands expansion plan is the $16-billion, publicly funded Trans Mountain pipeline.

Within weeks, crews will try to bring in a massive drill to bore a tunnel through Burnaby Mountain, linking the tank farm to the oil tanker terminal. Meanwhile, pipeline construction is slated to begin soon in Kamloops, Surrey and Coquitlam – all far more accessible than a forest service road in northern B.C.

At the same time, a whole new generation of activists is stepping forward. Indigenous youth and student climate strikers are rightly terrified of the climate crisis, and outraged by injustice. They approach this work with relentless urgency, tactical creativity and a deep sense of solidarity.

#YYJ right now. A coalition of Indigenous youth have locked down in solidarity with #wetsuweten . They are under the so-called ceremonial entrance is no being occupied by Indigenous youth in an act of ceremony on behalf of the land defenders who are currently being surrounded by RCMP with guns drawn. #unistotencamp #wetsuwetenstrong #gidimten

A post shared by Indigenous Climate Action (@indigenousclimateaction) on Feb 6, 2020 at 4:10pm PST

Centrist politicians like Justin Trudeau and John Horgan have two choices: put the brakes on oil and gas expansion (and take a shellacking in the mainstream press). Or crack down on Wet’suwet’en supporters. But arresting dozens, even hundreds may not break their resolve – indeed, it could galvanize others to take action.

Which side are you on?

In his final book, The Reconciliation Manifesto, the late Arthur Manuel urges Indigenous people to look to the civil rights movement of the 1960s.

“Our battle must be as intense as the fight against racism in the American south and against apartheid in South Africa,” wrote the Secwepemc author, strategist and political leader. “Self-determination on our traditional lands is the only solution to colonialism.”

But the colonial economy, he points out, isn’t working for non-Indigenous people either. “Canadians must realize that we have to build a new Canada, a whole new country based on recognition of our Aboriginal and treaty rights.” Manuel predicted this alliance will be key to surviving the climate crisis.

As the struggle for Wet’suwet’en land escalates, progressive voters will have to pick a side: international oil companies, or the nations that have stewarded these lands for thousands of years. People holding sniper rifles or eagle feathers. Our kids, our friends and neighbours – or the guys in the comments section of a news article.

There’s still time for our government to change course. To call off the police. To sit down again with the Wet’suwet’en chiefs. But that time will soon run out.