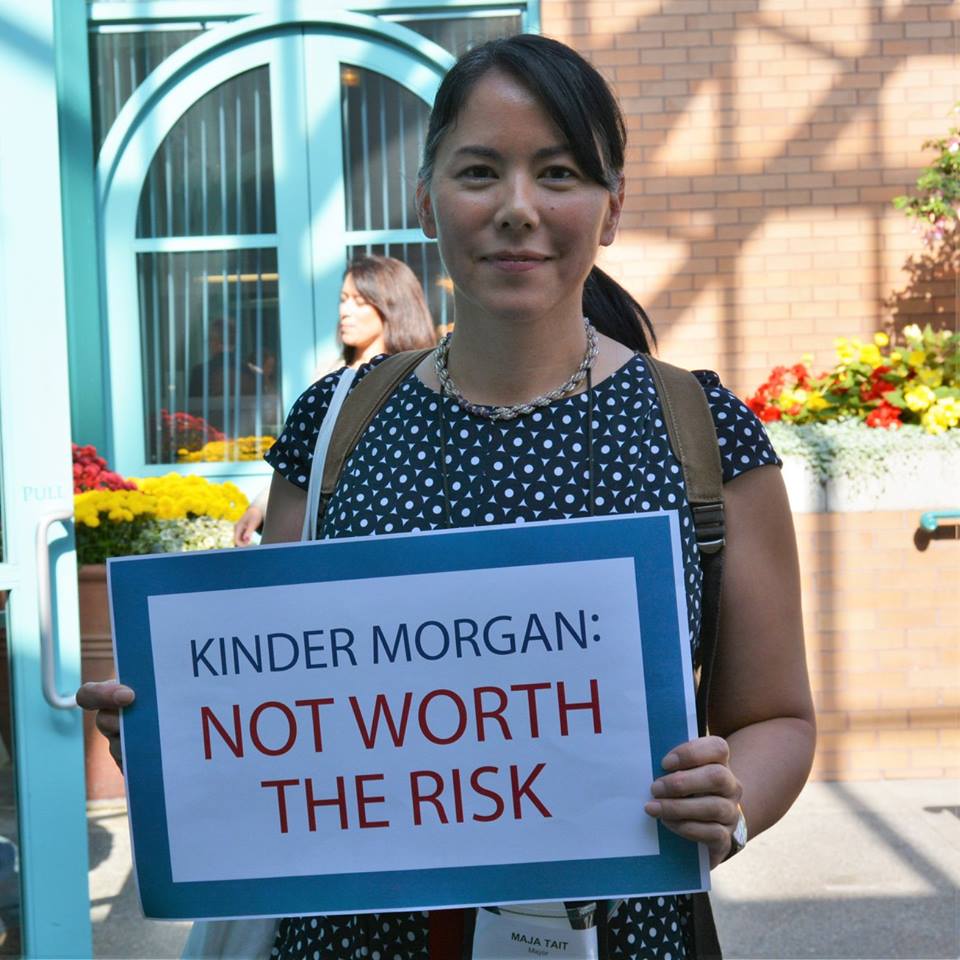 We won big on election day

It’s election night, and I’m sitting in Dogwood’s Vancouver office waiting for the polls to close. There’s a newspaper in my bag with headlines that read Kirk LaPointe, pro-pipeline candidate for mayor of Vancouver, has the wind at his back. Kinder Morgan ads have been popping up on my computer screen all week. I’m nervous. There’s a lot at stake in key municipalities where Dogwood organizers and our allies have been hard at work.

Organizers and staff really ramped things up in the days leading up to the elections, but it was hard to say if the thousands of phone calls, countless hours spent door knocking, text messages, social media posts, media stunts and supporter e-mails would push us over the line in important races around the Salish Sea region.

Doubts and questions keep circling in my head: what if the biggest municipality in the province suddenly has a council that’s gung ho for Kinder Morgan’s proposal? What if we lose the ‘No Tankers’ plebiscite in Sooke? It’s anyone’s guess how much money Kinder Morgan spent on advertisements during the municipal election period – What if they really can buy an election?

And then the results started coming in over the radio, and as the night wore on and the winners were announced, I felt a wave of relief followed by utter jubilation (which I admit are two things I haven’t felt on an election night for years).

Dogwood teams and allies did exceedingly well in municipalities where we worked: 27 of the 35 candidates who scored the highest on our survey were elected.

Mayors and councillors who think citizens deserve a say in major resource projects – like Derek Corrigan in Burnaby, Gregor Robertson in Vancouver and Maja Tait in Sooke – won by impressive margins. Champion municipal leaders now hold majorities on councils in Vancouver, Burnaby, Victoria, Courtenay and Esquimalt. It’s no coincidence these are all places with strong and active teams of Dogwood organizers on the ground.

The amazing team in Sooke, along with their allies, made sure citizens voted 70 to 30 per cent on a plebiscite against increased oil tanker traffic past their homes.

Here’s a fun stat: in areas where Dogwood organizers were operating on the ground identifying voters and encouraging them to make it to the polls on election day, voter turnout was up by an average 43 per cent over last time. This is pretty neat when you compare it to the average B.C.-wide voter turnout bump, which increased by only 13 per cent.

In Esquimalt, an area with a highly active Let BC Vote team, turnout was up by a whopping 67 per cent! Dogwood teams can’t, of course, take full credit for this boost, but we know the Dogwood network played a key role in many areas.

And it wasn’t just places where Dogwood teams operated on the ground that saw victories on the tankers issue. In the north, Lee Brain, who gave one of the most moving speeches against Enbridge to the National Energy Board (NEB) panel, is now the mayor of Prince Rupert. Phil Germuth, who raked Enbridge’s reps over the coals about the company’s inability to prevent oil spills during a presentation to council, is now the mayor of Kitimat. And outspoken Enbridge opponent Taylor Bachrach was re-elected mayor of Smithers.

As Chantal Hbert recently pointed out in her column in the Toronto Star, “The fact that otherwise business-friendly provincial governments are putting more and more distance between themselves and the pipeline file is a sign that public opposition to these projects is fast spreading well beyond the environmental movement.”

Now Enbridge and Kinder Morgan are licking their wounds – especially the latter. The Texas-based energy giant spent untold millions of dollars on ads in Metro Vancouver, but ultimately lost big at the ballot box.

How did a company with unlimited resources representing the richest, most profitable industry in the world lose? I don’t mean to sound clich, but it really was the power of organized people. And this power should not be underestimated – especially after we witnessed hundreds of people make a statement atop Burnaby Mountain over the past two weeks.

The story of these stunning municipal victories is quite simple. Here is just some of what the Dogwood community has accomplished this past year:

This is just the beginning. We are a giant that’s just lifting its head.

Now we’re turning our eyes to our provincial representatives who are missing in action on the flawed review process for Kinder Morgan and the federal election that’s just around the corner.

I look forward to the day when I can read triumphant headlines declaring Enbridge Northern Gateway and Kinder Morgan’s expansion are both dead and gone. But if Stephen Harper wins another majority government next year, you can bet on Northern Gateway roaring back to life.

On the provincial scene, Premier Christy Clark and the BC Liberals have avoided taking any meaningful position on whether they support the review process for Kinder Morgan’s pipeline and tanker plans. We’ll be working with you and our teams to put more pressure on our provincial leaders to actually represent the interests of their constituents.

I’m grateful and honoured to work with hundreds of people who are plugging-in to this work in different ways from all across the province and beyond. Many Dogwood teams are now battle-tested and know what to expect when they put the rubber to the road. Our systems, our ability to grow and our capacity to adapt are that much better.