Honey, we need to talk about Site C

Posted in Climate, Commentary, In Depth

Giant dam for fracking companies could double your Hydro bill

The Site C dam was supposed to be a gift from B.C. taxpayers to international fracking companies. We would supply them with cheap electricity, they would blast methane gas out of underground shale rock in the province’s northeast. We would get jobs and revenue, they would export ships full of fracked gas to burn in power plants overseas. But the whole plan is falling apart.

The original budget for BC Hydro’s megadam on the Peace River was $6.6 billion. After years of missed deadlines and geological challenges, the cost rose to $12 billion. Now things have deteriorated so badly that BC Hydro won’t put a price tag on Site C. Or say if it can even be completed.

In a province that already gives a billion dollars a year to oil and gas companies, Site C towers above all other fossil fuel subsidies. Experts say pushing it forward will jack up Hydro bills for decades to come. Instead, we should cancel this troubled project – and invest those billions in switching off fossil fuels and building renewable energy projects in communities all across B.C. 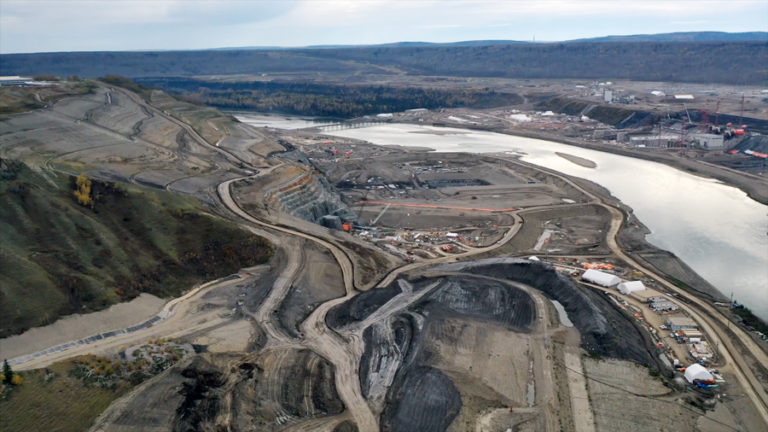 When you’re in a hole, stop digging

Former Premier Christy Clark was clear about the dam’s purpose way back in 2013, when she told Global News: “You can’t power up these huge [fracked gas] facilities without more power, so BC Hydro’s going to have to build Site C.” Last month Premier John Horgan sold it as a way to reduce the climate impact of extracting and burning fracked gas. “Electrifying the gas fields, for example, takes pressure off the emissions that would come from the liquefaction process,” Horgan said.

But at what cost? BC Hydro won’t say. Horgan has tasked a former deputy finance minister, Peter Milburn, with investigating the problems at the dam site and estimating what it will cost to keep going. Whatever the number, it’s clear it’s going to be bad.

When you find yourself in a hole, the first step is to stop digging. And in 2020 that means saving precious public money for the people of B.C., not giving it to giant international oil and gas companies. Whether those subsidies come in the form of tax breaks, cash or infrastructure like Site C, the money comes out of the pockets of everyday British Columbians.

If we’re serious about fighting climate change and saving public money, we need to stop subsidizing fracking and pipelines with our tax dollars. And if we want to stop Hydro bills from rising for every household and small business in British Columbia, we need an exit strategy on Site C.

This megaproject is a looming financial nightmare for British Columbians. The Crown corporation in charge, BC Hydro, is already carrying $23.3 billion of debt. At the beginning of the pandemic, it lost another billion dollars betting on interest rates. As B.C. Attorney General David Eby said about ICBC, BC Hydro is a financial dumpster fire.

Our Hydro bills are already going up. We don’t know how much Site C will add because BC Hydro refuses to estimate the project cost. But experts have said in the past BC Hydro would have to double your bill to get back to fiscal health. That would be a disaster, especially for low-income households that already spend too much of their monthly budget keeping the lights on and staying warm.

B.C. will need clean power as we replace vehicles, gas furnaces and stoves with electric versions. The good news is we can generate it using wind and solar technology for way less money than it would cost to finish the dam. The bad news is politicians hate admitting when they’re wrong. But as more information trickles out, they may have no choice. Soon, the B.C. public will learn more about problems deep underground. Problems that engineers warned about, years before construction began. 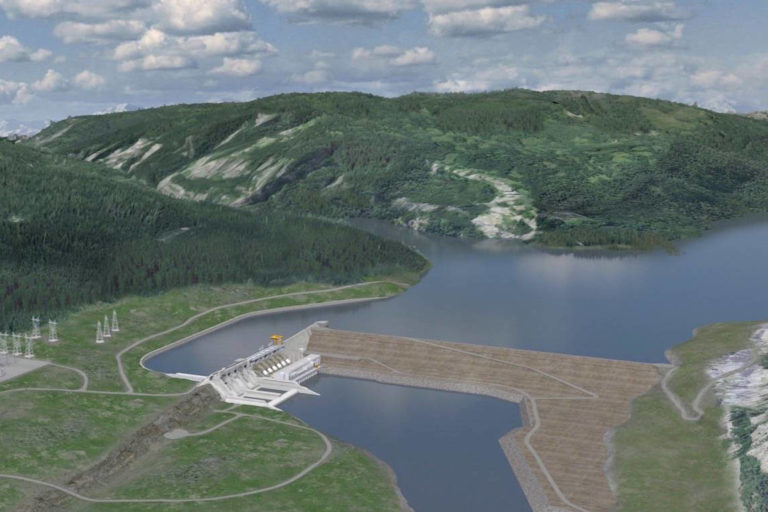 Illustration of Site C by BC Hydro

The ground under the dam is made up of many layers of sediment – organic material that sank millions of years ago to the bottom of an ancient lake. That shale rock is what contains coal, oil and gas. It’s not very stable. The layers can slip and slide under pressure, whether from the weight of a huge dam, or toxic chemicals pumped into the ground at nearby fracking sites.

Ten thousand earthquakes jiggled the ground near the dam in 2017 and 2018 – the biggest one strong enough that workers had to be evacuated from the construction site. A 400-metre-long “tension crack” opened up on one bank of the river, which had to be patched at huge additional expense. A major landslide forced the evacuation of a nearby town in 2018. Now, the foundations of the dam itself appear to be sliding.

This creates an obvious safety hazard if the dam’s reservoir were ever filled. Even if expensive engineering fixes went ahead and the massive concrete structure could be anchored in place, how long would it hold back an 83 kilometre-long artificial lake? How strong will the fracking earthquakes get? Are we willing to gamble with people’s lives downstream to find out?

Every day we wait costs more

The right move is to pause, take a deep breath and stop throwing good money after bad. BC Hydro should apologize to the farmers whose land they expropriated, and avoid a costly court battle with the West Moberly First Nations over obvious violations of their treaty rights. We should pay the workers building the dam to remediate the site. And the rest of the money we should save for other projects.

Communities all over the province have energy efficiency and local power projects that could be shovel-ready in months, generating jobs, investment and clean renewable energy in rural B.C. Solar farms in Alberta are now being built for about $1 million per megawatt of capacity. In other words, we could equal the capacity of the Site C dam for as little as $1.1 billion, rather than 11 or 12 or 20 billion dollars.

Of course the sun doesn’t shine and the wind doesn’t blow around the clock. That’s why BC Hydro would have to use its existing reservoirs as giant batteries to store energy, then fire up the turbines when solar, wind and other sources need a boost. On a technical level it’s totally feasible. The same can’t be said for the Site C dam.

While our allies fought old-growth clearcutting, species extinction, unaccountable mining companies, fracking, gas terminals, Site C and other crucial battles, Dogwood focused on stopping crude oil tankers on the B.C. coast. We knew if we spread ourselves too thin, our work would suffer. So while we’ve been critical of Site C in more than 300 articles since 2005, most of our resources went to the No Tankers campaign.

Together our movement finally defeated the Enbridge Northern Gateway project in 2016. We thought we had won again in 2018 when Texas-based Kinder Morgan threw in the towel on the Trans Mountain oil tanker expansion. But Trudeau bought the project with billions in public money, fundamentally changing the climate battle in B.C. and Canada.

As private investors walk away from oil and gas projects, governments are filling the gap with public money. Meanwhile, our country is facing a climate emergency, a pandemic and now a global recession. Many Indigenous communities still don’t have clean drinking water. It’s wrong to burn billions of taxpayer dollars trying to grow the oil sands. And it’s wrong for our provincial government to use public money to prop up fracking and pipelines in B.C.

Site C is part of that problem. The NDP had a chance to cancel the dam in 2017. They decided to keep going. They’re fulfilling Christy Clark’s pipe dream of a fracked gas export industry — even though the gas bubble has burst, the economics no longer add up and B.C. has to pay five times more in subsidies than we get back in royalties just to keep these projects on the rails.

The Horgan government told taxpayers we’d already spent so much money on the dam, it was “past the point of no return”. But that’s not true if the project can never be safely completed. It’s painful to realize you wasted several billions dollars trying to pour concrete on top of sliding mud. But now the only smart move is to stop. Let’s save the rest of the money and spend it on local stimulus projects. We’ve compiled 33 of your best ideas here.

Once our elected MLAs are sworn in, British Columbians need to question them hard on their support for oil and gas expansion at this moment in history. In particular we need to ask why, after promising to make life more affordable, the NDP government is burning cash on a doomed project that will drive up our Hydro bills for decades to come.

As problems at the dam site get worse, somebody is going to have to put a number on how much this whole mess will cost. That’s our moment to push Premier Horgan to change course. If he refuses, I believe this half-finished dam on the Peace River will become his political tombstone. But if he’s willing to admit he was wrong, new possibilities open up.

Cancelling Site C, B.C.’s biggest oil and gas subsidy, would be a huge step in the right direction. It would prevent a major rate hike at BC Hydro and deal a blow to international fracking companies. It could also open the door to energy conservation retrofits and Indigenous-led clean power projects BC Hydro has refused to invest in until now.

It’s never too late to do the right thing.

8 Responses to “Honey, we need to talk about Site C”

Climate groups project message denouncing companies and the government for promoting gas as a false climate solution UNCEDED xʷməθkʷəy̓əm, Sḵwx̱wú7mesh AND səlilwətaɬ TERRITORIES (VANCOUVER, BC) — Early this morning, climate advocates lit up Canada Place with a projected message for the British Columbia government and its corporate partners: stop promoting fracking in the province. Environmentalists […]