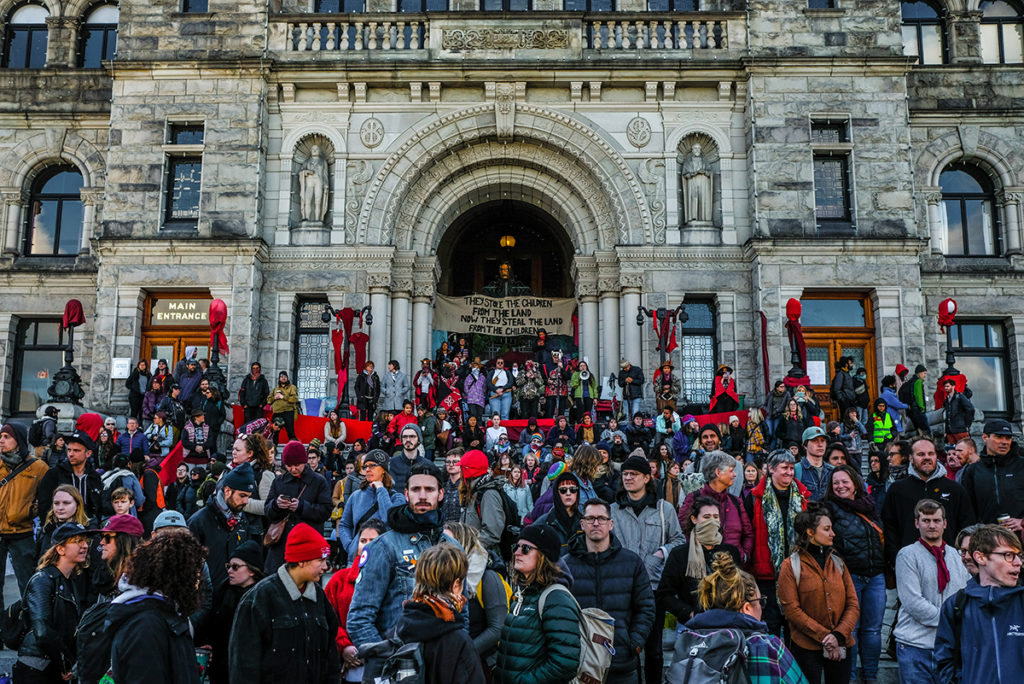 We are the official opposition

Under a powerful majority government, it’s up to the people to defend Indigenous rights and the climate

The fiery attacks on Mi’kmaq people by commercial fishers in Nova Scotia – and another police raid on Haudenosaunee land defenders in Ontario – could trigger a political crisis for B.C.’s new government on the scale of the Wet’suwet’en solidarity blockades earlier this year.

“From coast to coast right now Indigenous people are being attacked for defending their inherent rights. The government and their forces are done with working towards reconciliation. It’s time to shut it down,” reads a recent call to action seen hundreds of thousands of times on social media.

Many observers have compared the RCMP’s slow response to racist violence against Mi’kmaq people practicing their inherent, constitutionally protected fishing rights to the swift, heavy-handed enforcement of injunctions brought by pipeline companies against Wet’suwet’en and Secwepemc people on their own lands.

If the #ShutDownCanada movement boils over as it did in February, and national solidarity builds once more around Coastal GasLink and Trans Mountain land defenders, John Horgan’s newly minted majority government could immediately face a crisis that puts their promises on reconciliation and climate action to the test.

All eyes on the frontlines

As I write this, salmon are running in rivers across B.C. Trans Mountain and Coastal GasLink are attempting to drill under the Secwepemcetkwe (Thompson) and Wedzin Kwa (Morice) rivers. And Indigenous people are being criminalized for enacting their responsibilities under their own laws to protect the waters, the salmon and the land for future generations.

For the past several weeks, Secwepemc members have maintained a presence at the Trans Mountain drill site on the banks of the Thompson River. As the drilling date neared, they issued a cease and desist order to Trans Mountain, making it clear that while band councils may have signed deals with the company, hereditary leadership of the Secwepemc Nation, who collectively hold jurisdiction over unceded territory, have not given their consent.

Last week in Wet’suwet’en territory, four women were threatened with arrest for conducting a ceremony in the area where Coastal GasLink is attempting construction. A video released by the Gidimt’en clan in response said:

“In January 2020 we evicted Coastal GasLink from our Yin’tah. In February 2020, they invaded our territories at gunpoint for the second year in a row… Our eviction still stands. We are not impeding their injunction, we are upholding Wet’suwet’en law.”

Both communities have again called for solidarity actions from Indigenous and settler allies across the country, and both say they will do what is necessary to protect the land.

Our tax dollars at work

One of the Wet’suwet’en women arrested in February described her experience to the Tyee:

“They came in really aggressively with 100 RCMP, completely armed, and tactical teams and helicopters dropping RCMP behind us, just for four Indigenous, unarmed land defenders. I mean, that’s my father’s territory. Just being criminalized for being on your land — it’s big frustration for sure. It’s heartbreaking.”

All this, for a pipeline to export fracked gas via the foreign-owned LNG Canada project – a carbon bomb with a business case so poor that it is only able to proceed with $5.3 billion in taxpayer subsidies.

These are our tax dollars hard at work, using military force to remove Indigenous people from their homelands, and helping corporations profit from fuelling climate change.

We are the official opposition

B.C.’s new government has a choice: avoid conflict between RCMP and Indigenous land defenders, reduce carbon emissions, and save billions of dollars of public money for economic recovery and climate action – or side with corporations extracting wealth from British Columbia at the expense of people and planet.

In his last term, Premier Horgan expanded oil and gas subsidies, endorsed LNG Canada and allowed taxpayer-funded armed raids in Wet’suwet’en territory. Although he remains officially opposed to Trans Mountain, he now calls it ‘inevitable’ and plans to issue provincial permits – and he has told residents to ‘call the cops’ on Secwepemc land defenders. All this took place in a minority government with the balance of power held by the Green party.

Under a powerful majority government, with the daylight between the two major parties’ approaches to climate action and Indigenous rights becoming increasingly hard to see, the BC Liberals in disarray and the Greens no longer holding the balance of power … we must be the official opposition. It is us – organized people – who will counteract corporate power and influence in this province.

To climate voters worried about what the election results will mean for the issues they care most about, I say: it has always been up to us, not politicians, to defend our drinking water and salmon and coastline. To fight for Indigenous rights. To build a safe climate future for our kids.

The battle over fracking and pipelines in B.C. is about to get very real. So far, John Horgan and Justin Trudeau seem willing to use our tax dollars to unleash the full powers of the state to get these projects built. As settlers, as climate activists, as people who love this place, we cannot sit on the sidelines as Indigenous people are dragged from their homes for protecting the same land we all love.

Democracy doesn’t end on election night. Democracy is organizing — on the streets, online and on the land. Democracy is putting your time, energy and money towards the frontlines, where people are upholding Indigenous laws and keeping Big Oil at bay.

Today, tomorrow and for every day after that, we will hold the government’s feet to the fire — and we will defend our home, with or without our elected representatives.

14 Responses to “We are the official opposition”