Where is the NDP?

By Vote 16 BC campaigner Megan Lawson

Less than a year after voting in support of lowering the voting age, the party is M.I.A.

In November 2019, I was at the British Columbia New Democratic Party convention. That week, an overwhelming majority of delegates, including then-MLAs and now-candidates, voted to support lowering the voting age to 16 in provincial and municipal elections.

Less than a year ago, MLAs Katrina Chen, Ravi Kahlon, Rob Fleming, Spencer Chandra Herbert, George Heyman and Bowinn Ma all indicated their support for lowering the voting age. Where are they now?

Less than a year ago, John Horgan declared: “if you are arguing with a 16-year-old about their right to their future, you are on the wrong side of history.”

Well, Mr. Horgan, let me introduce myself. My name is Megan. I am 16, a senior in high school, my school’s student council president, a member of the Vote16BC campaign and I care about my right to my future. Which side of history will you be on?

John Horgan launched a snap election and claimed it was called to pave a path forward for the next four years and beyond. But lowering the voting age has not appeared in the BC NDP platform. If this election is about the future, why are youth on the frontlines of the pandemic and the climate crisis being overlooked? More than ever before, youth are involved in politics and leading social change movements, yet their voices are not represented in British Columbia’s Legislature.

Last fall, Mira Blakely, co-leader of Vote16BC, and I found ourselves at the BC NDP’s convention. We learned that lowering the voting age was low down the list of resolutions and would likely not hit the floor for debate and vote. Members of our Vote16BC team, along with Young New Democrats, sprung into action to fight this David v.s. Goliath battle (Spoiler alert! David wins in the end).

We needed to strategize and find a way to bring our resolution to the floor of the convention for a vote. There was an appeal sheet: if you got enough people to fill it out, your resolution would be advanced. We started there.

I, along with many others, spent most of the morning speaking to delegates about the resolution and attempting to get lots of appeal sheets filled out. When I was not speaking to delegates, I was at the Vote16BC booth, collecting petition signatures, handing out buttons, stickers and handbills. We thought if we could pass out enough information, maybe, just maybe, we could get the support required to get the resolution passed.

We soon realized that a lot of delegates were already on board with lowering the voting age and our group of 15 people grew drastically. By 9:00 p.m. that same day, we received the message: our resolution had been moved to the seventh spot and would hit the floor for a vote! 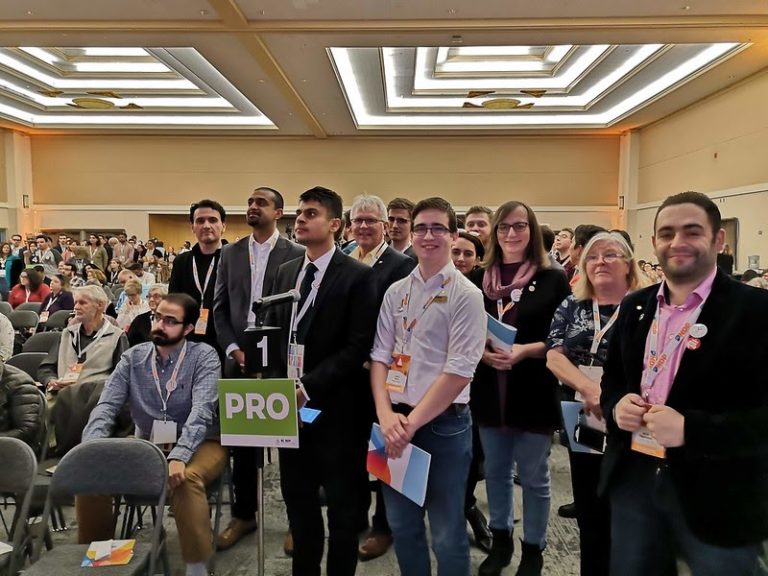 Sunday morning I was back, ready to begin preparations for our resolution being debated on the floor. Sunday was all about building support – we needed to convince delegates and MLAs of the merits of lowering the voting age and make sure they cast their vote.

I spent the day speaking to members of the NDP, asking them to show their support by standing at the microphone with the delegates speaking about lowering the voting age. Our speakers for the resolution included some notable MLAs, Young New Democrat members, as well as Jane Heyman, who is a NDP delegate, retired teacher and George Heyman’s older sister.

When the resolution hit the floor, microphones were crowded with supporters, and delegates were holding up their cards to pass the motion before the speakers were even finished.

Almost everyone in the room was holding up their card. The resolution was passed with overwhelming support. It was a massive success.

Where is the NDP now?

Here we are a year later. The reasons NDP members supported lowering the voting age at their convention less than a year ago still apply. Adding 110,000 new voters to the electorate is proven to produce forward-looking, inclusive policies. Directly engaging youth in our democracy is essential to fighting climate change. Diverse and progressive candidates are more likely to get elected. The Union of B.C. Municipalities, the BC Green Party, the B.C. Federation of School Board Trustees and several labour councils and unions are all in support.

Voters under 30 can make or break a political party. If a political party can connect with them, they will show up and they can shift the outcome of an election. In Scotland voter turnout went up almost 30 percent when the voting age was lowered. But it can also be found in the inverse – if parties don’t give youth anything to vote for, why would they show up at all? If the NDP wants an edge in tight races, especially where progressive parties split the vote, they should consider policy proposals that put the needs of youth first.

In the past, when women or people of colour were banned from the ballot box, there were no political consequences for not expanding the right to vote. But this time there could be. 16 and 17 years olds can’t vote in this election. But we will be able to hold the NDP accountable in the next one.

Come 2024, we will cast our ballot for a party that supports lowering the voting age.

2 Responses to “Where is the NDP?”

November 26, 2020 FOR IMMEDIATE RELEASE Youth applaud BCFED resolution to lower the voting age VANCOUVER – Democratic reform advocates are celebrating a vote by BC Federation of Labour delegates to support lowering the voting age in British Columbia. The resolution passed by a wide margin Thursday morning, making the BCFED the latest labour organization […]