Turning the pages of the Panama Papers

You don’t have to dig very deep to find a link to B.C. politics

The announcement of a new and massive ‘offshore entities’ data leak came a couple of months ago while Dogwood was planning its new ‘Ban Big Money’ campaign. I decided to keep an eye on the Panama Papers, and signed up for updates from the International Consortium of Independent Journalists (ICIJ), which received the leak last year.

Meanwhile, reporters at the Toronto Star and Globe & Mail uncovered the Cash for Access scandal still playing out in BC and Ontario. Dogwood launched its “Ban Big Money campaign” with a new petition and the first in a series of case studies about big political donors, titled “Meet The Trophy Hunting Clowns Who Dictate Wildlife Policy in BC”.

When an email from the ICIJ appeared in my inbox saying the data release was imminent, I started making some very basic preparations. Looking at the coverage to date from the CBC and the Toronto Star (Canada’s partner news organizations within the consortium) I thought to myself: “bet I can find something more interesting than anything they’ve dug up so far.”

I was also motivated by recent polls showing nearly 9 in 10 British Columbians want big money out of politics now, before the next election. Since our goal in the #BanBigMoney  campaign is to thoroughly describe what big money looks like, where it comes from and what effect it has on our democracy, I figured the Panama Papers were worth a look. 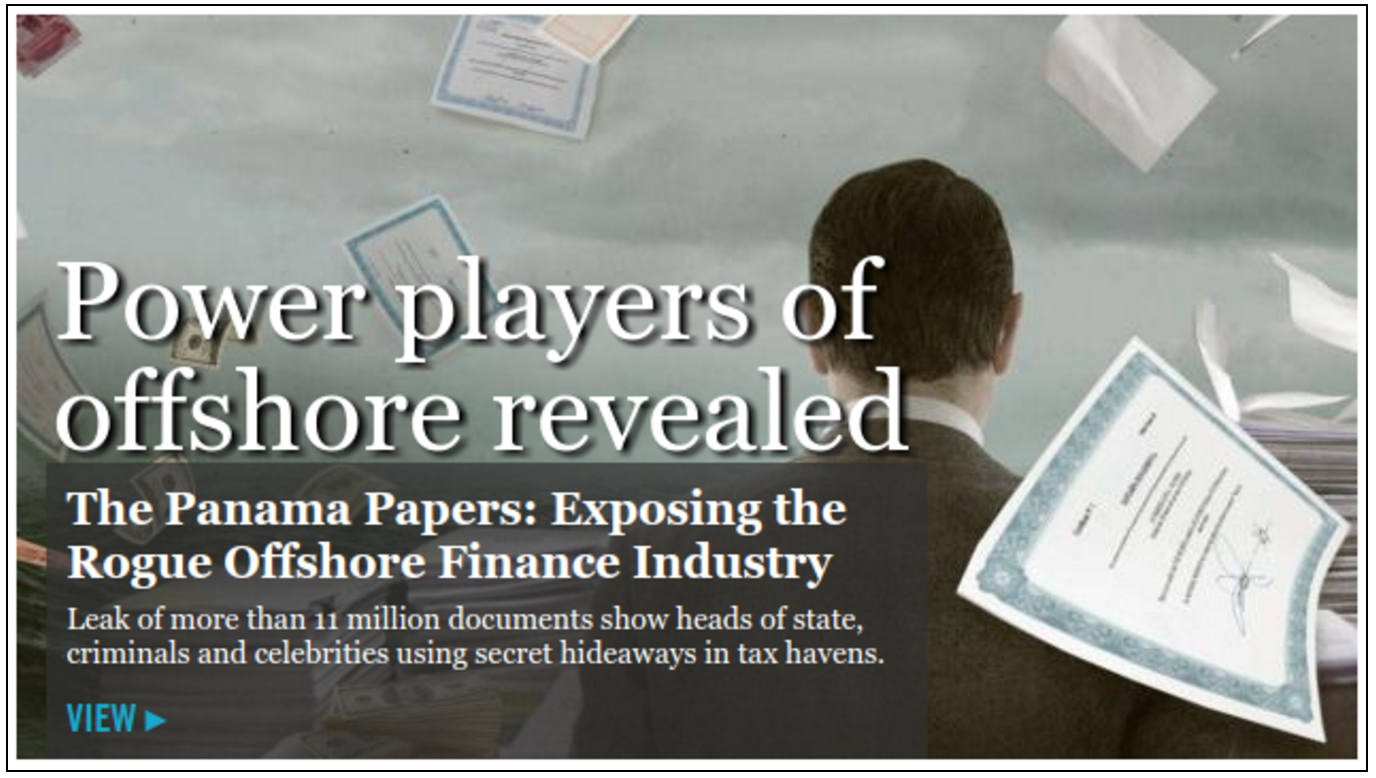 If this is your first time hearing about the Panama Papers, think of it like this: Wikileaks showed us what diplomats and military officials actually say before their press secretary gets hold of the script. The Snowden Files revealed that yes, intelligence agencies will bend or break almost every law constraining their surveillance activities. The Panama Papers lay out a vast, worldwide network of ‘offshore’ holdings where the rich and powerful stash their cash, including a growing cohort of Canadians.

It’s a rare, inside peek at wealthy people behaving badly.

As a hardworking person living the suburban taxpaying dream, I’m always interested to know how it is that the rich get to be so rich, while the rest of us struggle to just scrape by. So before delving into the Panama Papers I acquainted myself with Elections BC’s Financial Reports and Political Contributions System — a tool anyone can use.  It’s a good place to start if you are interested to see who is contributing to which political party, and how much.

To show you how it works, let’s start with unions. Click the link above and type UNIFOR into the search criteria and you will get back something that looks like this: 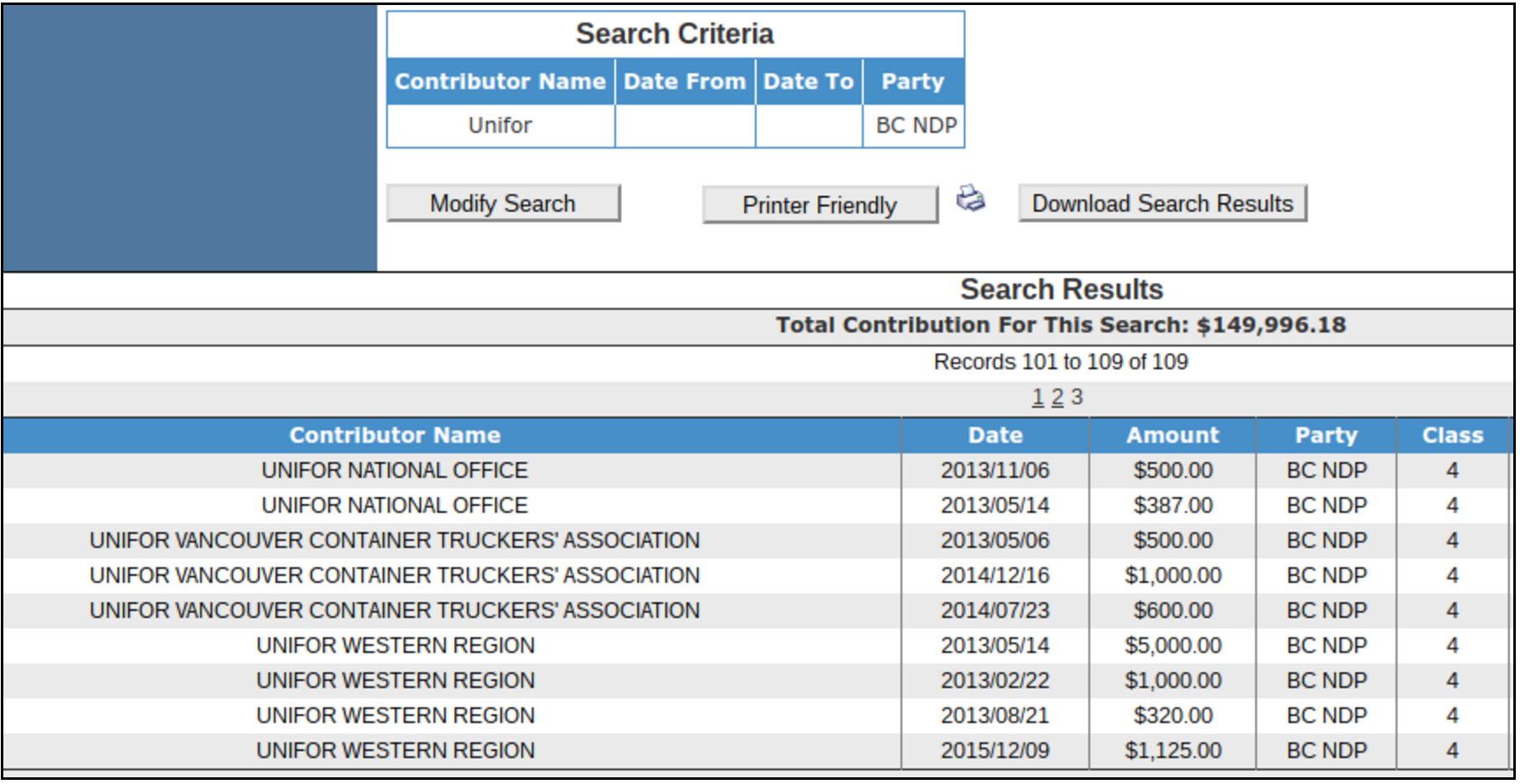 As you can see, Canada’s largest private-sector union contributed almost a hundred and fifty grand to their NDP friends over the past three years. Unions are an easy target because there aren’t that many of them around any more and they are pretty upfront about who they support.

It’s much more difficult with corporations, particularly numbered ones. To illustrate this point I entered the characters ‘BC LTD’ into the search field (you can do the same). BC LTD are the last five characters at the end of all numbered companies registered in B.C. (I think). What you will find is that numbered companies have contributed well over a million dollars to the BC Liberals and fifty five thousand to the NDP.

I’ve always been a bit suspicious of numbered companies. They just seem like they are trying to hide something from someone. Or they were just plain stumped to come up with a name that fit the business plan.

Following  that logic, I used the same strategy to troll the Panama Papers. I took numbered company contributors to B.C. political parties and started plugging them into the Panama Papers Database and the very first set of characters I entered, 0707677 BC LTD, led me to a Vancouver based company called Haywood Securities… Who also happens to have donated at least $333,000 to the BC Liberals. That was easy.

So, who or what is Haywood?

Founded in 1981, Haywood Securities is a 100 per cent employee-owned investment dealer with more than 275 employees in its Canadian offices in Vancouver, Calgary and Toronto. Haywood Securities Inc. is a member of the Toronto Stock Exchange, the TSX Venture Exchange, the Montreal Exchange (MEX), the Canadian National Stock Exchange (CNSX), the Canadian Investor Protection Fund (CIPF), and the Investment Industry Regulatory Organization of Canada (IIROC).

They also appear to be linked through the Panama Papers to Kola Gold, Gem Diamond Mining Company of Africa and previously to African Aura Resources Ltd. through offshore accounts. Here’s the team that holds it down in Vancouver. 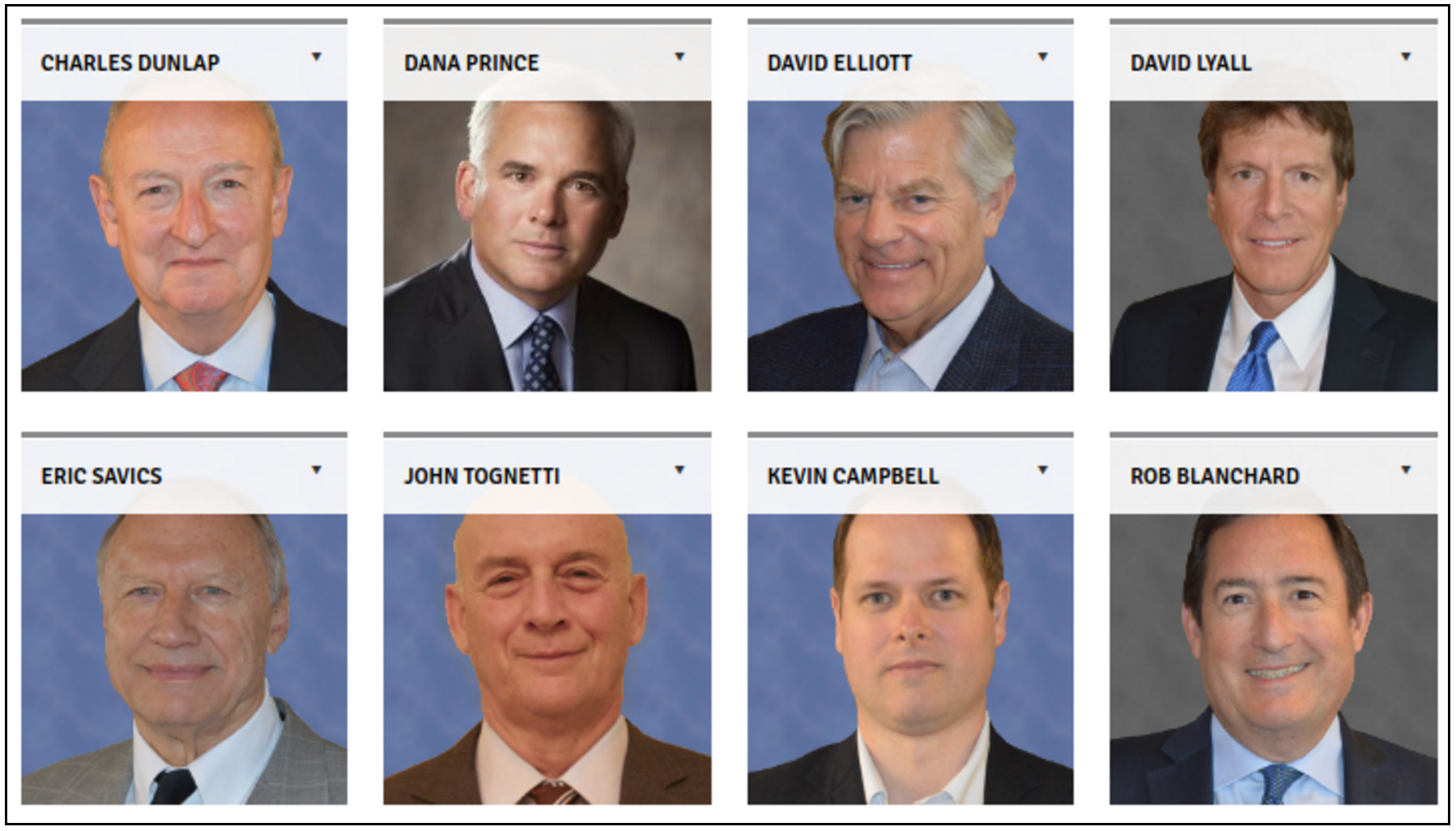 So, what’s so interesting about these guys? Likely not much. There is absolutely nothing to suggest that this company is doing anything wrong, and since they are a member of the Investment Industry Regulatory Organization, I’m sure they handle their clients’ investments properly. They piqued my interest simply because they’ve had a few of their business dealings daylighted in the Panama Papers and happen to be big donors to B.C. politicians. I ran a few of their corporate officers’ names through the donations registry and chalked up another $10K pretty quick.

Wikileaks, the Snowden Files and the Panama Papers are the tips of icebergs waiting to rip gashes in the hull of the Titanic built by Big Money. Below the surface, angered and engaged citizens await.

Based on what I’ve been reading in the news lately, I suspected I would find connections to B.C. campaign financing in the Panama Papers. What surprised me was that it took virtually no time to do so. This leads me to think there might be more out there. Something more interesting than African Diamonds or Kola Gold.

If there is a challenge with the Panama Papers database, it is the sheer volume of it. It’s huge, containing 11.5 million documents — only a fraction of which have been released to date. If printed out and stacked up it would reach more than 41 miles high, so a comprehensive investigation will require your help.

Like unlimited political donations, it’s not illegal in B.C. to have an offshore account. But I think by the time citizens like you and me have taken a good hard look at what’s going on behind the curtain, we’ll have reached the conclusion that both should be.

If you would like to help, please leave a comment in the space below. Let us know which ‘entity’ you are looking into and e-mail us if you find something “interesting”.

If you possess confidential information that you would like to make public, please use the protocols established by the IJIC. For more information, you can contact them here:
ICIJ @ The Center for Public Integrity,
910 17th Street NW,
7th floor,
Washington, DC 20006, USA

11 Responses to “Turning the pages of the Panama Papers”