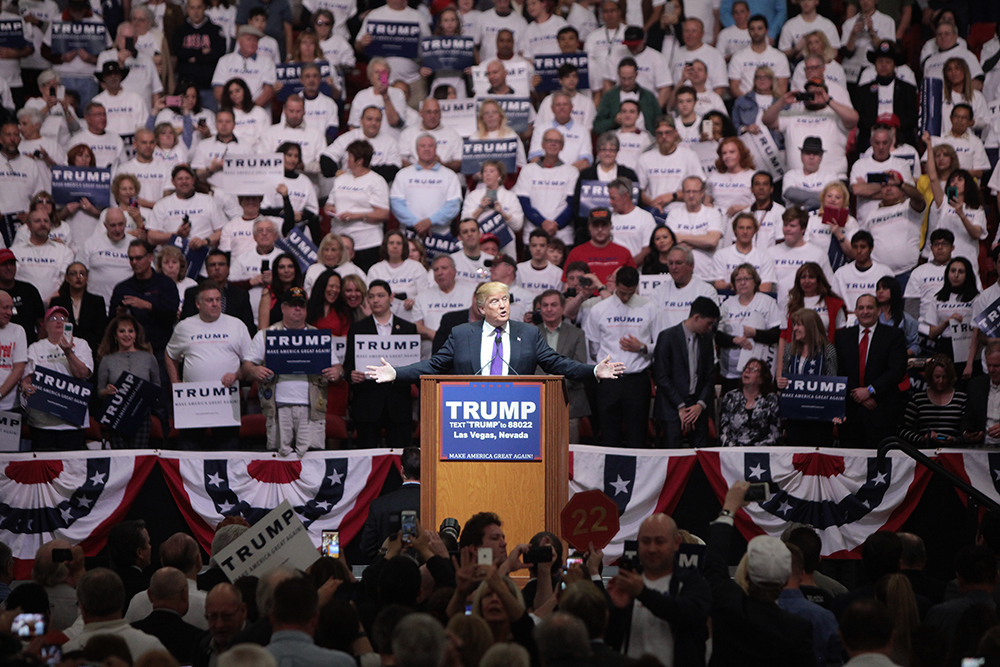 What Trump’s win can teach progressives

How do we harness the power of emotion to elect decent people?

Yesterday I wrote about how local resistance can slow down climate change, even under a Donald Trump presidency. But we can’t win just by playing defence. One day we’ll need to change who’s in charge. To do that, we can learn from Trump and the Republicans in two key areas:

First things first. An extraordinary ad came out two days before the election you probably never saw. It has eight million views on YouTube, and has been uploaded again and again all over Facebook and Twitter, but if you’re like me your social newsfeed just filtered it out.

It’s worth taking two minutes now to watch this video:

This was Donald Trump’s final pitch to undecided voters. “It’s a global power structure that is responsible for the economic decisions that have robbed our working class, stripped our country of its wealth, and put that money into the pockets of a handful of large corporations and political entities,” he says. “The only thing that can stop this corrupt machine … is you.”

“In animals, this hormone is released when the animal is cold or facing a stressful situation, preparing the animal for fight-or-flight reaction,” writes Bubenik. “In humans, adrenaline is often released when we feel cold or afraid, but also if we are under stress and feel strong emotions, such as anger or excitement.”

Do establishment politics make me angry? Yes. Am I excited by the prospect of “stopping this corrupt machine”? Well, the body doesn’t lie.

Hillary Clinton’s team produced some very clever content during this election, like the “Way Back When” website that contrasted the accomplishments of the two candidates in the years leading up to the election. (Spoiler: Trump was a sleazy dirtbag the whole time.)

But the Democrats’ most popular and hard-hitting attack ads, like “Mirrors,” “Role Models,” and “Sacrifice” didn’t inspire an exhilarating, fight-or-flight response for me. Rather, they evoked emotions like sadness, contempt or at best, righteous indignation.

In each of these ads, the audience watches Trump’s outrageous statements through the eyes of weak, vulnerable people like children and disabled veterans. Like them, we are trapped in front of the TV, forced to endure his professional-wrestler act. But unlike in televised wrestling, no hero arrives to smash him into the turnbuckle.

Dozens of my friends shared the Clinton campaign ads, inviting the people in their Facebook bubble to join in tsk-tsking at Donald Trump. Only two people I saw share Trump’s bombastic “Argument For America” spot.

One was Bill Tieleman, the unabashedly populist campaigner who helped pull off the last BC NDP election win (20 years ago) and the stunning “No HST” initiative in 2010. The other is Angus McAllister, a mischievous pickup truck-driving pollster who lives out in the woods and loves hunting and fishing.

Both Bill and Angus have spent years travelling around the province, talking to all kinds of people. Both of them are naturally curious, which I think is a key part of being an effective political communicator. Whether you’re knocking on doors, sitting down for coffee at McDonald’s, listening to talk radio or scrolling through someone else’s Facebook feed – you need to care about people who are not like you, and what they have to say.

B.C. is not as badly screwed as Michigan, Wisconsin or Pennsylvania, but there’s a lot of hurt in our province, a lot of economic anxiety and people uncertain what the future will bring. This is not unique to either rural or urban British Columbia. The source of the stress might be different – fewer shifts at work or skyrocketing housing costs – but the emotional impact is the same.

The basic job of an organizer is to find people who feel isolated or afraid, and bring them together to feel safe and strong. “Progressives” need to get way better at empathizing with people’s current emotional reality – not using facts to explain why their gut feelings are wrong. We need to feel their pain and anger in our bodies. Not our heads. And yes, we need to learn how to transform it into political fuel.

That brings us to local races. In the U.S. the Republicans dominate the House, the Senate and most governors’ offices, allowing that party to shape the field on which subsequent battles are fought. In B.C. it’s becoming clear we won’t win on our issues without legislation – and we can’t make laws without shifting the political conversation. That means supporting outsiders and truth-tellers at all levels: nominations, leadership contests, tribal councils, municipalities and regional districts. It may mean getting your friends and family elected.

Decent, reasonable people need to either take over the political parties — or start new ones.

Parties are powerful vehicles for ideas, but they need to be defended from corporate interests, ideologues and unaccountable leaders, or else they start to decay. The way to both democratize parties and improve the odds for maverick candidates is to sign up lots of new members. And the way to spur those people to action is through emotion.

Case in point: the Republican party tried to kneecap Trump, but his promise of blowing up the whole rotten system proved irresistible. Passionate supporters flooded the nomination process and he won. In the general election Clinton outspent him by half a billion dollars but he swept those hurting Rust Belt states and won. Money, digital strategy, ground game, data – all that campaign infrastructure is important. But as Trump just demonstrated, none of it is a match for emotion.

That remains the missing piece of the puzzle for progressives: understanding how our nervous system really works.

Only by understanding our neighbours’ fears, or what they find funny, can we start to earn their trust. Learning how those ancient biological reactions shape political decisions will help us mold stronger candidates. And harnessing the full power of our emotions is the only way to defeat Trump-like figures – if we seek to put wise, moral people in positions of power.

One response to “What Trump’s win can teach progressives”