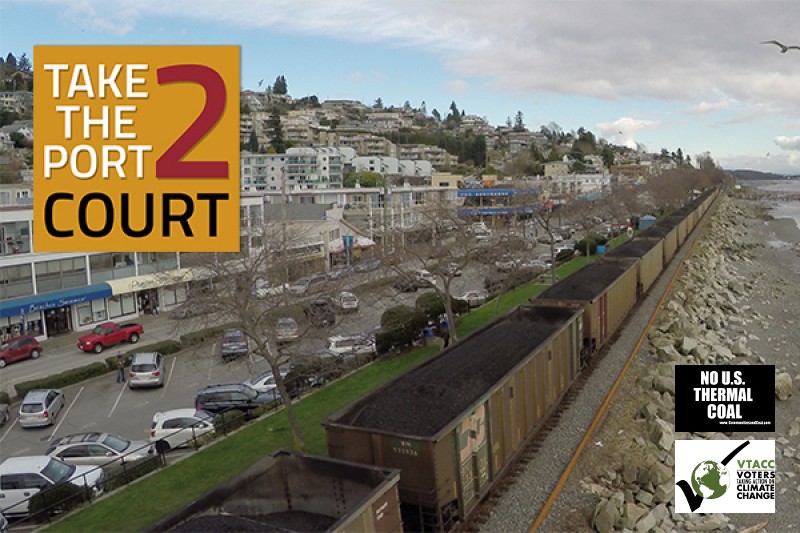 On May 17, along with our partners Communities and Coal, VTACC is taking the Vancouver Fraser Port Authority (aka the Port of Vancouver) to Federal Court for judicial review of its approval of a new coal export facility at Fraser Surrey Docks.

Walking into court next week will be the culmination of more than four years of effort to keep a coal port off the Fraser River. I want to tell you a bit about what is at stake and why we committed to this effort. I also want to ask for your help to make it happen. Going to court is hard and expensive work, but in this case it’s necessary.

The coal port expansion plan involves shipping U.S. thermal coal from the Powder River Basin in Wyoming and Montana by open rail car in trains more than a kilometre long through the communities of White Rock, Delta and Surrey to Fraser Surrey Docks. From there it would be loaded onto freighters and shipped to Asia, where it would be burned in power plants, releasing emissions equivalent to the sixth biggest climate polluter in Canada.

This proposal is so absurd you might think it tempting to just shrug it off – the only problem being Fraser Surrey Docks is serious and the project may have backing from U.S. coal companies desperate to get their dirty fossil fuel to Asia. As our U.S. allies shut down plans for coal ports on their west coast that desperation is just going to increase.

This was clearly a proposal needing push back and we decided to participate in good faith in the Port Authority’s project review process. After all, our ports are tasked with working with broad support in the best interests of all Canadians. Surely, if we showed this project wasn’t widely supported, would harm our communities when the coal was shipped by rail and would hurt our climate when the coal was burned, the Port would turn it down. Right?

Unfortunately not. What we came to learn is that decision making at our Port Authority is fundamentally conflicted. On the one hand, the Port is a federal regulator, charged with protecting the public from harmful impacts from projects like this one. At the same time however, the Port is a landlord that funds its ongoing operation from the leasing of public lands and the collection of fees from businesses operating on those lands.

We didn’t think the Port could successfully balance both those roles, and the details we uncovered through Access To Information Requests – which showed the Port was reporting on our advocacy work to a coal lobby group and hiding their sponsorship of coal industry events – suggested they may not even have been trying. Even worse, we learned the executive compensation plan at the Port included bonuses tied to port performance, meaning there appears to be a financial incentive for those making the decision to approve the projects the Port was charged with permitting. As we put all of these pieces together, we became increasingly worried decision making at the Port was biased. And not in a good way.

Over time a powerful coalition developed involving Communities and Coal, Dogwood, RealHearings and others. Together we were able to make sure thousands of people voiced their concerns about this project. Health experts weighed in on its harmful effects. Individual cities and Metro Vancouver came out in opposition.

But in the end all this opposition and expertise wasn’t enough. The Port approved the project, and along with Communities and Coal, VTACC was left with no choice but to challenge in court what appeared to many as the Port’s rubber stamp approval of this project.

Fortunately for us we had a powerful ally in the environmental law charity Ecojustice, which has filed this challenge in Federal Court on our behalf.

The last three years of preparation have been challenging and the Port has fought us every step of the way. However, if they thought they could wear us down and make us go away they were wrong.

We’re eager for our day in court because we want to ensure the Port is held accountable to the public they’re meant to serve. British Columbians deserve impartial environmental decision making from our public regulators.

If you agree, we can use your support! Please join us at federal court on May 17 and visit www.GoFundMe.com/Port2Court to contribute to this challenge.