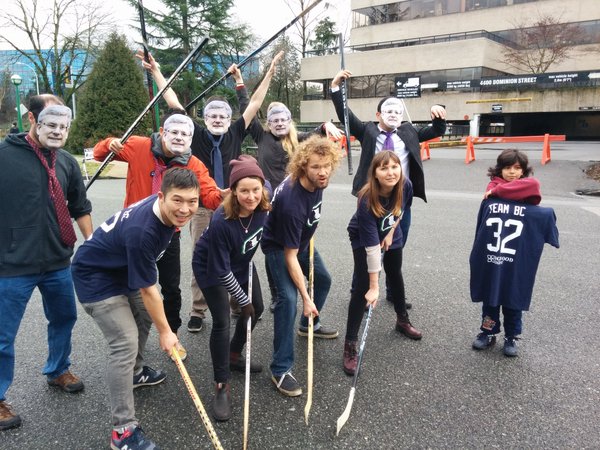 The Puck Drops In Burnaby. Which Team Are You Cheering For?

For the next ten days, a dwindling body of intervenors will deliver their arguments for and against Kinder Morgan’s proposed Trans Mountain Expansion Project in a hearing room at the Delta Hotel in Burnaby. Despite the change in government last fall, the Kinder Morgan review is proceeding under Stephen Harper’s rules, with a decision expected in May by Stephen Harper’s handpicked appointees.

How did this happen? On his way to defeat at the ballot box, the outgoing Prime Minister stacked a number of federal agencies — including the National Energy Board — with Conservative appointees. Their terms don’t begin to expire until 2020, after the next election. While the governing Liberals have asked other Harper appointees to step down, they have left the NEB untouched. For now, the Kinder Morgan review is continuing as planned.

Who exactly has the federal government vested with the power to decide British Columbia’s energy future? And who is standing up for B.C.’s interests? Let’s meet the teams.

The Away Team: Harper’s NEB

Like the offence and defence in hockey, team NEB has a couple of lines each of ‘Insiders’ and ‘Experts.’ The Insiders are a group of appointments from the Canadian energy establishment. Take for example Chairman Peter Watson (C2). At the time of his appointment he was Alberta’s top bureaucrat and was named Alberta’s Resource Person of the Year in 2011 by the Alberta Chamber of Resources.

Joining him on that line is Vice Chair Lynne Mercier (B2) – director of supply for Gaz Mtro, one of Canada’s largest energy companies. Hailing from Quebec, Mercier is a top-line energy insider. Rounding out the offensive line are two key strategists: Roland George (D1) who came to the NEB from Purvin & Gertz, Calgary-based energy consultants and Steven Kelly (A2), a former Kinder Morgan consultant, outcry over whose appointment forced the Board to strike his testimony from the Kinder Morgan project review. Team NEB’s second line includes Philip Davies (A1) from SaskPower and Shane Parrish (C1), the former CEO of the Acho Dene Koe Corporate Groups.

In processes like the NEB hearings, ‘Experts’ are your best defence. These are the scientists and specialists there to make sure phrases like “objective evaluation” and “independent and expert testimony” are used as often as possible. 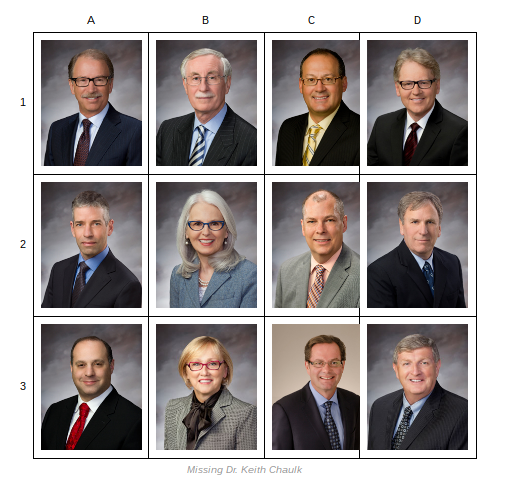 Joining him is Dr. Murray Lytle (D2) a Calgary engineering consultant and mining executive who worked for Imperial Oil. He’s also a former Conservative Party volunteer. According to the Vancouver Observer, the Chuck Olson Centre for Christian Worldview website says this about his past: “Mr. Lytle has been heavily involved in national politics and is happy to have lived to see the fruition of that labour, and his small part in it, with the election of the ruling Conservative Party.” Mr. Lytle is like a modern NHL enforcer: enough skill to qualify as an Expert, but also capable of throwing political bodychecks.

The second line of ‘Experts’ is the Review Panel itself, whose job, aside from providing regional balance, is to hear the merits of a particular project and collect local testimony. The closest B.C. gets to a hometown player is David Hamilton. who spent his career in the Northwest Territories before retiring to Vancouver Island. I wonder if Hamilton feels the weight of this province on his shoulders as he decides whether to let a Texas company, run by former Enron employees, ship toxic diluted bitumen to Chinese refineries via the Salish Sea? The other two panelists are Alison Scott (B2) from Nova Scotia and permanent member, Philip Davies (A1), in from Calgary to keep an eye on things.

For the Trans Mountain hearings the panel took the unusual step of explicitly defining upon which merits this project can be judged. Upstream pollution and climate change impacts did not make the cut. For British Columbians forced to deal with acidifying oceans, sea-level rise, forest fires, massive infrastructure adjustments and rapidly retreating glaciers, this omission is galling. The panel also refused to consider the latest science out of the United States on the chemistry of diluted bitumen (hint: it sinks in water) because such evidence would be “prejudicial” to Kinder Morgan.

It is into this narrowly defined review space that a group comprised of economists, scientists, municipalities, First Nations, labour reps and ordinary citizens, known as Intervenors, have stepped in to represent B.C.

Team B.C. doesn’t rely on industry money or political insiders. It relies on a depth of extremely talented, dedicated and knowledgeable people that reflect the province’s diverse social, economic, and environmental interests.For the purposes of comparison to Team NEB, here’s a selection of the folks who have laced up for the home team over the course of the Kinder Morgan review.

Former CEOs Robyn Allan (A1 from ICBC) and Marc Eliesen (B1 from BC Hydro) had this to say prior to withdrawing from the deeply flawed review process last year. Eliesen: “To me this is a farce: There is no way you can test the evidence if they won’t answer the basic questions. Unfortunately, this board is not objective.” Allan: “Regrettably, I’ve come to the disturbing conclusion that the outcome is predetermined.” These are damning statements from people who come from the top of British Columbia’s largest and most influential crown corporations.

It’s not all boardroom on Team BC. The next line brings both blue-collar grit and world-renowned scientific expertise. Andrew Weaver (D3) – MLA for Oak Bay-Gordon Head knows the trouble we are in if we don’t dramatically reduce emissions. As one of the world’s leading experts on climate change, Weaver was the only B.C. MLA to apply for and receive intervenor status (look for his testimony on January 20th). Russ Day (C3) – President of UNIFOR Local 601, representing Burnaby’s Chevron refinery workers, voiced concerns the NEB is not working in the interests of Canadian workers. Simply put, the refinery staff oppose this foreign pipeline project because it will kill Canadian jobs.

If you were looking for local representation at these hearings you would find it here: Ruth Walmsley (B2) and Janice Edmonds (D2) represent Burnaby and North Shore community associations BROKE and NOPE. Tsleil-Waututh Nation leaders Carleen Thomas (C1) and Rueben George (D1) supported by Burnaby born and raised lawyer Eugene Kung (B3) have been given the mandate from their nation, “The People of the Inlet,” to oppose Kinder Morgan’s pipeline expansion into their unceded territory: “We are committed to stopping Kinder Morgan – not just for our children, but for everyone who lives around the Salish Sea. We will fight them in the courtrooms, in the boardroom, on the streets and on the water.”

Derek Corrigan (C2) and Gregor Robertson (A3) are the elected mayors of a combined 830,000 people and have become vociferous opponents of the project. Mayor Robertson: “We heard overwhelming evidence that the Kinder Morgan pipeline proposal and the oil tankers associated with it are incredibly disastrous for Vancouver.” Mayor Corrigan: “We’re going to ride this thing through to the very end, because if we’re not going to win it here, we’re going to
win it in the courts, and we’re going to continue to fight.”

The above brings to mind a now famous and oft-repeated statement made back in 2013 by a vice-president at the Canadian Association Petroleum Producers, Janet Annesley: “The reality (is) that governments and regulators grant permits, but the public ultimately grants permission.” Annesley is now Chief of Staff to Jim Carr, Canada’s Minister of Natural Resources. Hopefully it’s clear from the statements by Intervenors that permission has been denied.

Overtime: cabinet and the courts

On major pipeline reviews the NEB can suggest conditions and recommend approval, but the final decision lies with Cabinet. For Kinder Morgan that step is set for May, at which point Cabinet will have three months to decide whether Certificates of Public Convenience and Necessity (CPCNs) should be issued to the proponent. What will the Liberals make of a Harper-appointed NEB decision? This is an interesting question because the signals from this government have been so mixed. Trudeau has promised government by cabinet, which means in all likelihood, this one is coming down to a vote. What I would give to be a fly on the wall watching that discussion take place.

In the court of public opinion, things get more problematic. When people see the Zombie NEB making a decision about a Harper pet project, they have legitimate reasons to be skeptical — especially given the ties between board members and the previous government. As it turns out, several of the appointees are registered Conservative Party donors. Ron Wallace donated $1,726 between 2004 and 2013. Chair Peter Watson donated $1,000. Michael Richmond (A3), a Toronto Lawyer donated $525. Jacques Gauthier (C3) a lawyer with Quebec GeoTech firm LVM donated $2,000 and Roland George (D1) donated $6,700 just after he was appointed in 2006 … almost a thank-you cheque if you will. What do you even say to information like this?

Then there are the real courts. On January 13th the BC Supreme Court ruled on Coastal First Nations v. British Columbia. This particular lawsuit challenged the 2010 Equivalency Agreement where the Province signed away its powers of review to the Feds prior to the Enbridge hearing. The same agreement remains in place for Kinder Morgan. In a strongly worded decision Madame Justice Koenigsberg found that in regards to Enbridge the Province abdicated its responsibility to consult with First Nations. As a result, she ruled the Equivalency Agreement invalid. The upshot is this: B.C. cannot waive the process unless affected First Nations consent to it as well. As described succinctly in his recent blog Dogwood’s Director of Strategy Will Horter says “For Kinder Morgan, it means the already suspect NEB review process is likely fatally wounded before it’s even completed.”

From January 19th to 29th the panel will hear oral summary arguments from intervenors at the Delta Burnaby Hotel, wrapping up in Calgary with a final session February 2nd through 5th. Meanwhile, the price of oil continues to slide as demand slackens and new production from Iran comes online. After the Paris climate conference and Canada’s commitment to hold global warming to 1.5 degrees, British Columbians have re-awakened to the perils of climate change. The Gitga’at decision is another game-changer, forcing the province to consult affected First Nations on this project and the Equivalency Agreement under which the review was signed away to Ottawa in the first place.

Look around and it’s clear the window of history is closing on projects like this. That’s why Kinder Morgan and its narrow-minded allies are so keen to press ahead. The former Prime Minister stacked the Zombie NEB with industry insiders for moments such as these: when a decision needs to be made swiftly and with no accountability to the people affected. Here’s hoping the new Prime Minister will live up to his campaign promises and blow the whistle on this rigged game before the clock runs out.