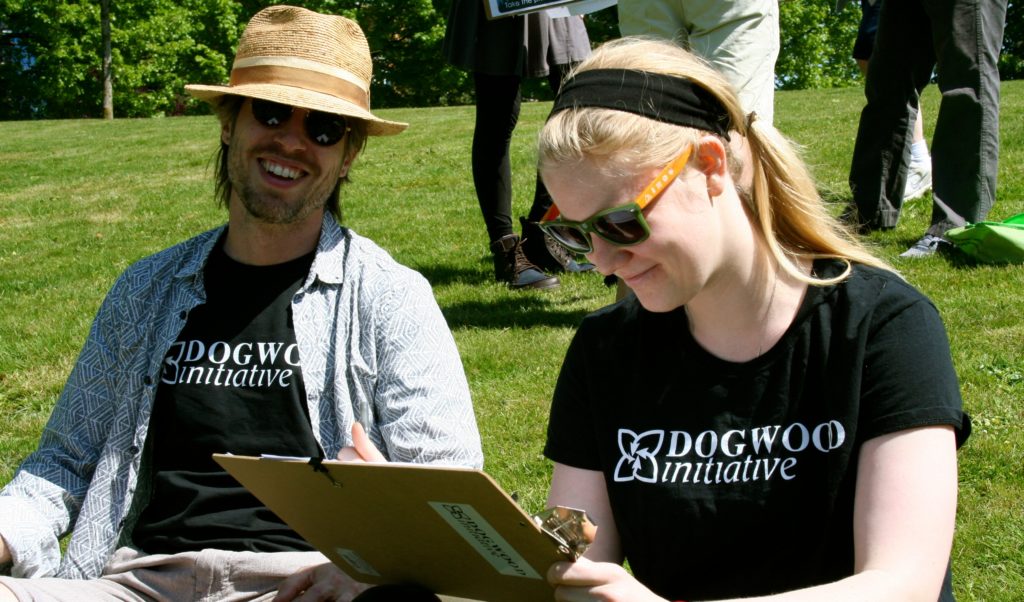 The first steps of organizing

If enough British Columbians pledge to sign up their friends, family and neighbours, it will be politically disastrous for Premier Clark if she does not stand up for B.C. against risky oil tanker proposals. That’s because together, we’ll have the people-power necessary to organize the hundreds of thousands of people across the province required to win a citizen’s initiative.

The first step is to get so big that success would be nearly guaranteed if we launch a citizen’s initiative. So what does that mission look like for people? You have to start small to get big: team up with a few friends or neighbours and together, find and sign up as many people in your community as possible.

Registering 9,885 people to knock on doors and collect pledges in all 85 B.C. ridings starts in places like coffee shops, churches and potlucks. Small tight-knit local groups will add up to a huge movement. This phase of Dogwood’s new No Tankers strategy relies on consistent ground work led by people who have taken ownership of the movement to protect B.C.’s coast – just like Esquimalt resident Terry Dance-Bennink.

After a life-changing trip to the oil sands this past September, she decided she wanted to step up. Terry says the most upsetting part of her trip was meeting people living in First Nations communities who were dying from toxins released by the tarsands.

“Cancer rates are 30 per cent higher than normal in some areas. As a cancer survivor, my heart goes out to them,” Terry says.

“When I came home, I felt the urge to do more than sign petitions, donate money and attend protest rallies. I’ve been giving talks about our trip at various churches and now I’m a Dogwood organizer. It’s a big leap from being a supporter to an organizer, but we have to step up to the plate before it’s too late.”

Since participating in Dogwood and Organize BC’s December organizing workshop, Terry has already helped develop a team in Esquimalt-Royal Roads with a clear target of collecting 5,888 pledges in the riding.

The foundation of the Esquilmalt-Royal Roads team can be partially attributed to a relationship that developed at Dogwood’s January 2012 Get Out the Vote event where Terry and teammate Maureen Burgess met for the very first time.

“We canvassed together and hit it off. She’s raring to go along with Jane Devonshire, a working mother involved in many community networks.”

Terry says when you’re building a team, you simply have to start where you are:

“We sat down with Peter Gibbs, the regional organizer, and discussed our targets, team structure and roles, and events we could sponsor to recruit volunteers. We started out by identifying our own personal networks in order to follow-up with people who may be interested. In my case, I’m a member of the Justice & Outreach team at Esquimalt United Church and we have ten folks who are now committed to the campaign… Our immediate goal is to recruit 15 core organizers to work with future canvassers.”

This kind of organizing approach is called a “Snowflake model” or a distributed leadership structure. Power, responsibility and ownership are distributed – not concentrated.

Extending the reach of their network even further, their team goes door-to-door every other Sunday afternoon, which includes an orientation, training and debrief afterward at the church.

“Anyone is welcome,” says Terry.

Terry will be giving a talk about her trip to the oil sands on Feb. 26 at Sidney’s St. Paul’s United Church, as well as a public meeting on March 24 at her church in Esquimalt to involve a broader circle of people in the campaign.

“Celine Trojand and I will speak about the citizen’s initiative and a member of the Coastal First Nations will speak to First Nations involvement. Guy Dauncey from the BC Sustainable Energy Association will answer the question often put to us: What DO you support? How can we transition from fossil fuels to sustainable energy in B.C.? It will be a lively evening for sure!”

Terry says she believes in building a grass-roots movement in B.C. as a way to influence politics, as we’ve known all along this was going to be a political decision. As of the time of publication, 9,243 people have taken the pledge to stand up for B.C. if Premier Clark won’t, and 1,058 of those people have raised their hands saying they want to receive training about how to bring together British Columbians who believe in a healthy coast and a healthy economy. We’re lucky Terry is one of them.

“It won’t be easy, that’s for sure. But when I wake up at 2 a.m. worrying about some campaign detail, I remember Nelson Mandela, Martin Luther King and countless others who drew on their faith in God, human goodness and the planet to keep going. We have to be brave and in it for the long haul.”