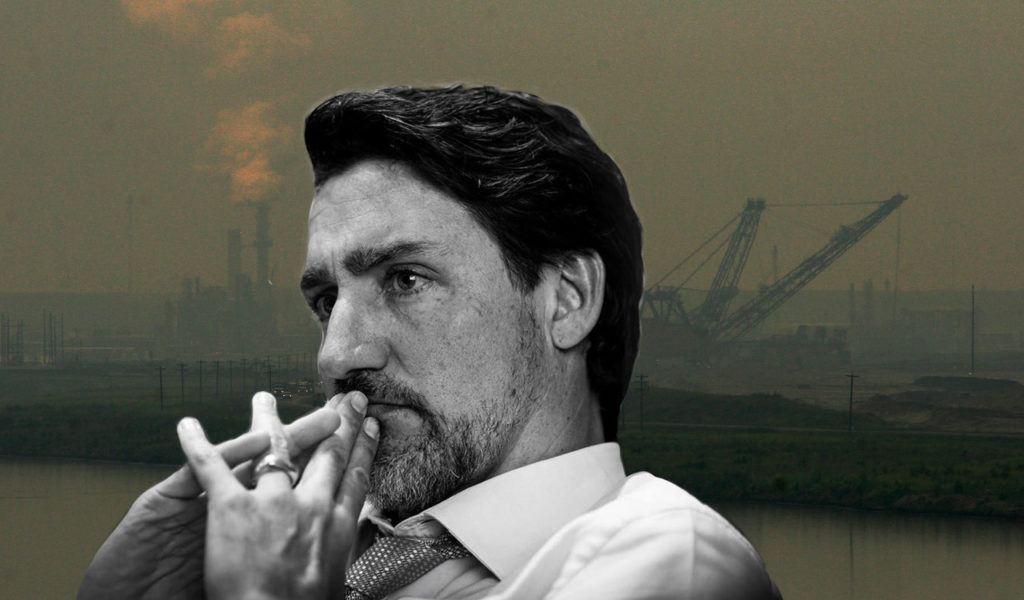 Teck Frontier: no way out for Trudeau

If Ottawa approves the largest oil sands mine in history, anger in B.C. and Quebec will only grow

Police forces across the province were stretched thin this week as RCMP raids on Wet’suwet’en territory set off a wave of retaliation against the government and corporate Canada. From Bella Bella to New Hazelton, Vancouver to Victoria, Indigenous youth and supporters blockaded the legislature, ports, rail lines, highways and intersections.

It’s a glimpse of what may come if the Trudeau government pushes forward with Teck Frontier, the largest open-pit oil sands mine in Canadian history – and a $16-billion, publicly funded bitumen pipeline to go with it.

In a significant shift in tone, Alberta premier Jason Kenney acknowledged this week “there’s a transition going on” in global energy markets. At the same time, he said “it is preferable that the last barrel in that transition period comes from a stable, reliable liberal democracy,” by which I gather he means Alberta.

By relaxing his denialist stance ever so slightly, Kenney is opening the door for Ottawa to keep expanding the oil sands – so long as everyone agrees that one day, decades from now, oil production may level off.

What is the public interest?

In July of 2019, Teck Frontier was approved by a joint review panel which found the project to be “in the public interest”.

The direct impacts of this project have been widely reported. They include the destruction of thousands of hectares of boreal forest, wetlands and peatlands – critical sinks for carbon dioxide sequestration. Frontier would poison diminishing fresh water supplies and destroy traditional fishing, hunting and gathering grounds for downstream Indigenous peoples.

On the other hand, Teck’s application promised $12 billion in tax revenue to the federal government over its 40 year lifespan. In Canada, “the public interest” seems defined not by climate science, the survival of a herd of bison or the way of life for Indigenous peoples who depend on it. Instead, all of that is trumped by money.

But even Teck’s projected revenues are based on some shaky economic assumptions. The company based its application to the joint review panel on oil being worth $95 per barrel. In long-term forecasting, nine other major oil companies predict pricing of $55 to $80 per barrel, with most estimates hovering in the low 60s. A majority of these companies have abandoned their oil-sands operations as a result.

Teck has since revised its prediction to $60-$70 per barrel for “decades to come” in its own forecasts to shareholders. “It’s painfully obvious these projects are disastrous for the environment and for the climate, and even plainer that they’ll never be financially viable,” says my friend and longtime Dogwood supporter Rob over a glass of beer.

“The trouble with this government is, they just don’t seem to have a Plan B!”

Rob, a retired engineer who has worked in and around the oil and gas industry for most of his life, knows more about the economics of worldwide oil production than anyone I know. So he was hardly surprised to check the news the other day and read —

“Last week, Teck CEO Don Lindsay said winning federal approval for the Frontier project doesn’t necessarily mean it will be built — the company will also need adequate pipeline access, the right commodity prices and a partner to share the costs.”

And who might that partner be? With tar sands oil at $50 a barrel, private sector suitors are not lining up. In the face of surging renewable energy production worldwide, Team Trudeau is choosing to invest instead in its continued vision of Canada as petrostate.

The link to Trans Mountain

Teck Frontier would crank out 260,000 barrels of heavy crude per day. Add diluent and it could take up more than half the capacity of the proposed Trans Mountain oil tanker expansion. It’s clear from Lindsay’s comment how these projects are intertwined.

When Kinder Morgan pulled the plug on its Canadian operations, the Trudeau government stepped in with our tax dollars to save Trans Mountain. Ottawa borrowed $4.4 billion to purchase the 65-year old pipeline. Building it will cost at least $12.6 billion, we learned last week.

Will Teck Frontier be our next publicly supported environmental disaster? “There are a lot of similarities between the way this Teck project is shaping up and what’s been happening all along with Trans Mountain, especially now that we own the damned thing,” Rob tells me.

“In the private sector, before a project proceeds, an ‘appropriation grade’ capital cost estimate is prepared so the company’s executives, board of directors and lenders can approve the appropriation of funds to proceed with the project. It tells decision makers what the cost will be to an accuracy of plus or minus 10 per cent.

“In the case of TMX my sources tell me that an appropriation grade estimate was not undertaken by Kinder Morgan. Even if it had been, a full revision of the costs would normally be done if there had been project delays that rendered the prices and costs inaccurate. This was not done by the federal government.”

Dogwood and allied groups launched a petition in December to demand just that, and within a month had over 20,000 citizens step up to demand answers on TMX costs. Sure enough, it turned out the federal government was massively underestimating costs, in order to minimize political backlash. There’s no reason to believe the pattern would be any different if Canadians become partners in Teck Frontier.

Time to put down the shovel

Every dollar taxpayers spend expanding the oil sands is a dollar we won’t have to build the new economy we need. The federal government claims it will use “future profits to finance renewable energy.” But Trans Mountain loses money every month. If we have to pay off $16 billion in loans, on top of subsidizing tolls for oil companies, the expansion may never break even.

The Institute for Energy Economics and Financial Analysis said late last year that Teck appeared “ill-equipped and ill-prepared to take on such a mega-project” and that neither an increase in the oil price nor production cost declines for the project are likely to be enough to improve its financial prospects.

If Environment Minister Jonathan Wilkinson and his cabinet greenlight Teck Frontier, another taxpayer bailout appears all but inevitable.

Meanwhile, the Liberal facade of climate leadership will once and for all be shattered, as citizens reject the idea that we should all take shorter showers and walk to work so heavily subsidized oil industry giants can gobble up Canada’s carbon budget.

Teck Frontier would be in operation until 2066. If the world is to have any hope of surviving the climate crisis, global demand for oil needs to decrease by 20 to 50 per cent in the same period. Falling demand means a decrease in price: as Rob says, you don’t need a Harvard degree to see the writing on the wall for Canada’s high-cost oil sands.

If indeed the Liberals have a Plan B, now would be an excellent time to use it.

3 Responses to “Teck Frontier: no way out for Trudeau”