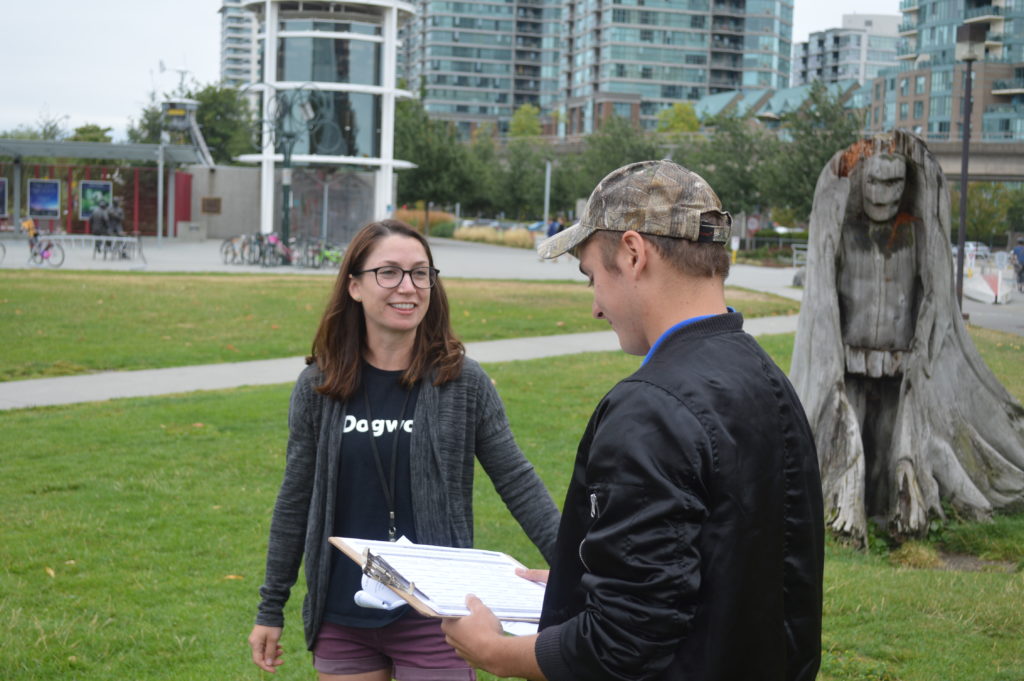 From cynicism to connection

This summer my friend asked how I liked my new summer job as a Dogwood Organizer. I replied, “I love it — my faith in humanity has been restored!”

Like many 30-somethings in the era of climate change and Trump, I’ve felt pretty damn jaded from time to time. We’re too young to have seen a revolution but we’re just old enough for the cynicism of facing the housing crisis and working in the “real world” to creep in.

For me, this cynicism turned into anger as I watched the events of Standing Rock, Trump’s election and Canada’s approval of the Kinder Morgan pipeline unfold from my computer screen. Enough was enough. Broadcasting my opinion over Facebook wasn’t going to achieve anything; it was time for a big shift. I applied for a master’s degree in Resource & Environmental Management at SFU and began volunteering with Dogwood, leading to my employment this summer.

Through my work with Dogwood my political life shifted from the doom-and-gloom echo chamber of social media and relentless university readings about colonialism in Canada, to actively going out and speaking to real people about the issues I care about. I moved away from the bubbling resentment of thinking no one cared about Canada’s climate hypocrisy and broken promises to uphold UNDRIP, to seeing just how much — and how many — people care about these issues, simply by initiating the conversation.

I also had the pleasure of working with fellow summer students, and helping with Dogwood’s Youth Summit, which brought out local teenagers passionate about making the change they want to see in the world.

Together we took tours of Chinatown; visited MLAs in North Vancouver, Burnaby and Vancouver; canvassed at Science World; discussed the importance of self-care and listened to a diverse range of knowledgeable speakers. Despite my enrollment in university I know I was learning just as much as these young participants. I was reminded just how intelligent and driven teens are—despite the fact their opinions are often written off. I was truly inspired and refreshed by spending time with the Summit participants.

So what are my big takeaways from this summer as an Organizer?

Social media has a place in democratizing the circulation of ideas and feelings, but Facebook arguments are like road rage — you say things to people you would never say face-to-face. Looking at the world through the media makes everything look dramatized and black and white. Issues like the Kinder Morgan pipeline are represented as though there’s a 50/50 divide between the yes and no sides. But that simply is not the case here in Vancouver.

Much of our summer was spent canvassing for petition signatures — interacting on the doorstep, at festivals and on street corners with our fellow Vancouverites. As my coworker Robert said, “there are more people on our side than against us” and “there is a vast amount we have in common with one another on all sides of the issue”. I couldn’t agree more. Even when I was out speaking to folks who didn’t agree with me I realized they’re not bad people, they just think differently. In real life if people don’t agree they’re generally respectful of one another and can learn from each other.

Finally, getting involved with an organization one shares values with is essential. As my other coworker Sofia explained, “advocacy groups like Dogwood truly are catalysts for change because they allow people to feel less isolated and alone when fighting for causes they’re passionate about.” Sofia has also learned the importance of analyzing issues from multiple sides and that “understanding the opposite end of a debate allows an individual to make a stronger case for their side.”

As Sofia eloquently puts it: “It really is the grassroots work of individual citizens that creates change. Everyday people who dedicate their time to these causes make big initiatives and revolutions what they are.”

Maddie Hague is a volunteer leader with Dogwood. She is pursuing a Master’s degree in Resource and Environmental Management from Simon Fraser University.

3 Responses to “From cynicism to connection”