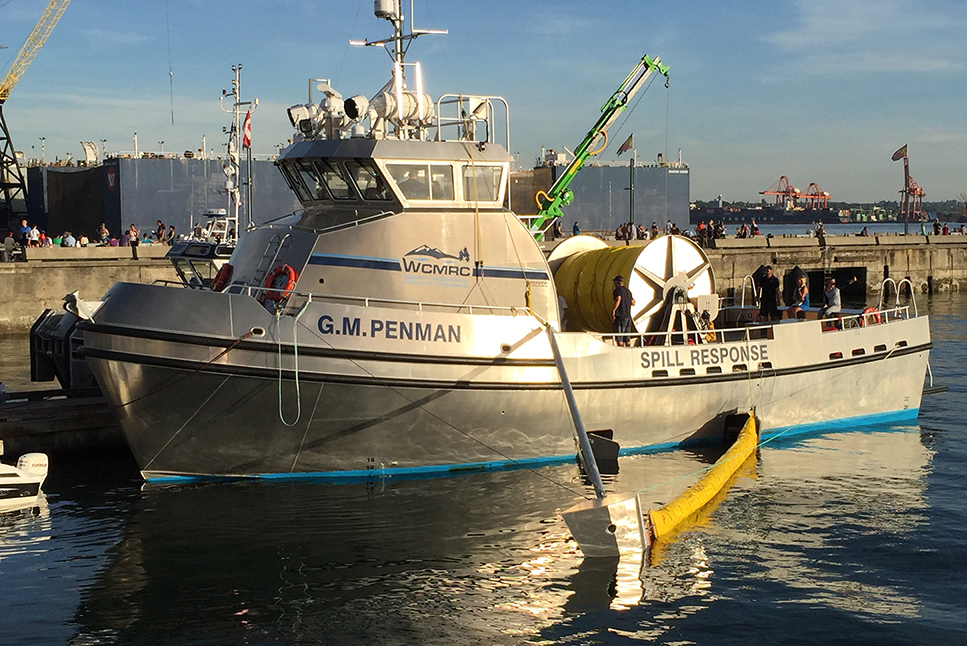 Ahhh…  Summertime on the North Shore. If you’re a North Van local like I am, there’s no better way to spend a Friday night than to head to the Shipyards Night Market. Couples and families stroll the waterfront, revelling in the shimmer of the evening sun on the ocean and the exotic smells and tastes of delectable food truck fare.

But wait. What are those gleaming new steel vessels amongst the outboard fishing boats? And there’s a brand new double-wide marketing display at the head of the dock inviting pedestrians aboard with giveaways for the whole family! Beach balls and sunscreen, personalized first aid kits… Everything you would need for a day of relaxation on one of our beautiful beaches.

So who’s the generous host? Time for a closer look.

According to the friendly staff at the table, they were there simply to celebrate the Western Canada Marine Response Corporation’s anniversary. Many people, they said, don’t realize WCMRC has been protecting Vancouver Harbour from oil spills since the mid-70’s. And with the changes to the Canada Shipping Act in 1995, their responsibility has expanded to where they now protect the entire B.C. coastline!

“The other thing most people don’t know,” – they said – “is that our oil spill responders on the B.C. Coast are world leaders.” Hmm… That phrase rings a bell.

I picked up a brochure and read:

WHERE ARE WE HEADED?

If either the proposed Northern Gateway or Trans Mountain projects moves ahead, WCMRC’s capacity will increase substantially.

Something smells fishy. Time to look into this a bit more.

Turns out WCMRC is owned by several major oil companies: Shell Canada, Chevron, Suncor and Trans Mountain (Kinder Morgan), with Kinder Morgan owning 50.9 per cent of the shares. These oil companies also sit on its board. More than 2,000 industry members are required to pay fees to cover the costs of potential spill response.

So could the oil company shareholders actually benefit from oil spills? Not directly, though a costly spill would provide WCMRC with hefty revenues which would benefit members in terms of new equipment and possibly lower fees.

Let’s get back to this “world leader” claim.

Seems like the last significant spill response in the harbour (on April 8, 2015, the MV Marathassa spilled an estimated 2,800 litres of intermediate fuel into the harbour off English Bay) was widely criticized, and has since been the subject of an independent study. This study outlined catastrophic flaws: rampant miscommunication between the agencies involved regarding roles and responsibilities, many hours passing before action was taken and conflicting reports as to the actual amount of oil recovered. And all this was during perfect weather, which allowed for the easiest possible access for cleanup. A forensic analysis conclusively proved oil from the spill spread at least as far as New Brighton beach near the Ironworkers Memorial bridge, a distance of about 13 kilometres. In April 2016, only a couple of months ago, Vancouver city manager Sadhu Johnston stated that a year later, WCMRC is still not ready for a major oil spill.

So what would happen in the case of a major spill of diluted bitumen (dilbit)? The Marathassa spill was considered statistically predictable. If Kinder Morgan’s plan moves ahead, there will be a seven-fold increase in tanker traffic in Vancouver Harbour, hugely increasing the risk of a large scale crude oil spill. From a global perspective, the Exxon Valdez disaster was not unusual, but statistically predictable. Looking at the number of oil spills worldwide from tanker accidents over the last 50 years, it becomes clear that if Vancouver Harbour becomes a major oil sands shipping port, we are eventually likely to experience a significant spill.

And the science is in: dilbit sinks. And once lost to the water column, it is irretrievable. In the hours following a dilbit spill, the highly toxic volatile compounds (an explosion and health hazard) evaporate, polluting the air. Spill response personnel cannot be dispatched until the workplace is considered safe. And by that time, many solids have sunk beneath the surface of the ocean.

Which leads to a rhetorical question: Why did the Federal government approve the dispersant Corexit for use in Canada this past June? Corexit, which was used during the BP spill in the Gulf of Mexico with devastating results, is applied to the surface of a spill to break oil into smaller droplets, which are more readily absorbed by marine animals and humans.  A recent study showed that toxicity to planktonic organisms is increased by more than 50 per cent with the application of Corexit. Basically, Corexit reduces the visibility of a spill, say, for media cameras, in exchange for massively destructive effects on the marine life food chain.

Can’t we learn from the mistakes made in the Gulf?

Take it from a World Leader

So just what does WCRMC mean by a spill response world leader? Here’s an excerpt from their new brochure:

No spill is the same

How much oil is recovered in a spill? It is not possible to provide a standard estimate of the percentage of oil recovered from a spill. The size of the spill, response methods and the environmental conditions at the time of the incident all affect how much oil is recovered. Depending on the type of product a significant proportion is lost to evaporation. Typically, mechanical systems recover about 5 to 25 percent of a spill in open water conditions.

It’s all making sense now. We keep hearing about the necessity of having a “world class” spill response — that we need one, that we’re going to have one before we can say ‘yes’ to these pipeline and tanker projects. But when you consider that a non-dilbit spill response is considered effective if 5 to 25 per cent of the oil is retrieved, and there is concrete evidence that dilbit sinks, i.e. can not be cleaned up, then it’s pretty clear sending in “world class” spill responders will be like sending in a few people with mops and pails to clean up after a tsunami.

Free beach balls and sunscreen aside, in the case of a response to a diluted bitumen spill, the term “world leader” is meaningless, and the sooner we stop using it, the better.

One response to “Spill response — what’s to celebrate?”