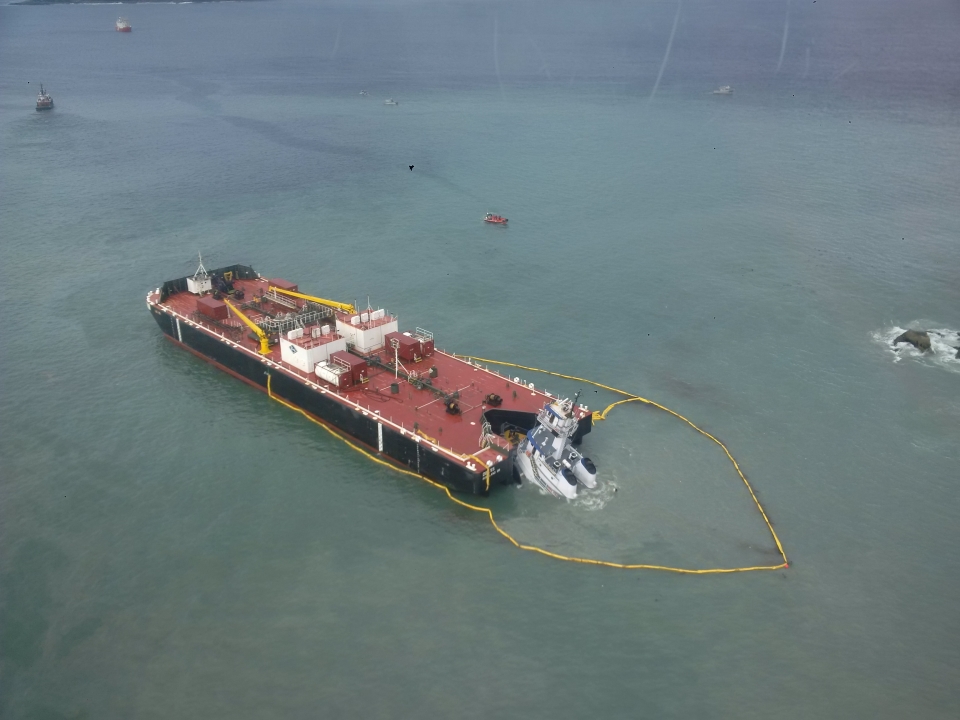 VICTORIA, B.C. – Coastal residents are gobsmacked to learn that a boat working to retrieve diesel from a sunken tug in the Great Bear Rainforest has itself sunk. Details are still sketchy, but Dogwood has confirmed that a skiff operated by Florida-based Resolve marine salvage took on water Wednesday afternoon in Seaforth Channel, next to the wreck of the tug Nathan E. Stewart. A crew member was rescued, fortunately without injury.

UPDATE: A Coast Guard spokesperson told media the skiff “was briefly swamped during salvage operations with one person on board. The boat and the person were both recovered.” The Coast Guard is not releasing photos of the incident.

“If this is world-class spill response, it’s not good enough,” said Kai Nagata, communications director at Dogwood Initiative. “And after what we heard from the Prime Minister today, we are deeply concerned that Ottawa is still not taking oil spills on the West Coast seriously.”

Asked about his plans for a North Coast oil tanker ban on Vancouver’s Breakfast Television this morning, Prime Minister Justin Trudeau instead described how his government had reopened the Kitsilano Coast Guard station, 650 kilometers away from the diesel spill in the Great Bear Rainforest.

“The oil tanker ban was Trudeau’s idea. It was his promise to British Columbians. But when he was asked a simple question about his plan for the North Coast, he chose to talk instead about Kitsilano,” said Nagata.

The Kits coast guard base is a 36-hour trip by boat from the spill site. Fortunately a Coast guard search and rescue team was able to deploy from a base on Denny Island to rescue the crew of the Nathan E. Stewart. The rescue operation officially kicked off at 1:13AM.

UPDATE: Western Canada Marine Response Corporation says its first spill response team also deployed from Denny Island, arriving on scene at 10:30 AM. Larger boats from Prince Rupert and Vancouver began arriving at 5:30pm Thursday. Eight days into the operation, roughly 40 per cent of the fuel had been recovered.

The spill is still not cleaned up, a week after the Texas-owned tug pushing an empty oil barge ran aground and sank. “Today’s incident reinforces a simple truth. We are in no way prepared to respond to a full-scale oil spill on the West Coast, and likely never will be. The best way to prevent a catastrophe is to quickly bring in a ban on oil tankers,” said Nagata.

Dogwood Initiative is B.C.’s largest citizen group, uniting more than 246,000 supporters in the province against oil tanker expansion on the West Coast.

“And with the protection of the environment, there’s been much talk, here on the West Coast, with the recent diesel spill here in the waters off of Great Bear Rainforest, our premier has been critical of the federal government in terms of the disaster cleanup. What is your response to the idea of calls for an all-out tanker ban, to avoid these types of things happening in the first place?”

“Well over, over the past years there’s been a lot of under investment by the federal government in marine safety and spill response and that’s something we’re absolutely committed to turn around and one of the symbols of that is uh, as — uh, well as someone who knows Vancouver and the Lower Mainland as well as I do — one of the first things we did was reopen the Kits Coast Guard base. Because we understand that having responders there if something happens is absolutely essential. We’re continuing to make historic investments in marine safety, spill response, and the kind of protection of our extraordinary coast not just for its pristine natural beauty but for the tens of thousands of British Columbians who make their livings on those waters every single day.”