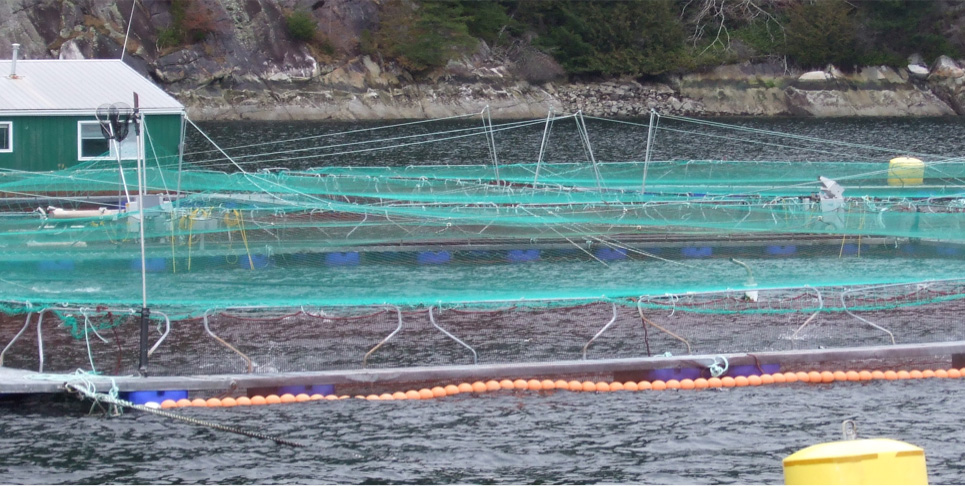 Something fishy about B.C. political contributions?

Although some salmon farming companies may try to portray themselves as a marine version of American Gothic, let’s get real. B.C. salmon farming is a huge, mechanized and mostly foreign-owned industry. On the surface, a fish farm may look rustic and innocuous, with floating buildings and docks. But underwater the true scale and controversy of this industry becomes apparent: disease and parasite outbreaks, dead whales and sea lions, and all that poo.

How much poo? To get an idea, a typical farm can hold 2,400 tonnes of salmon. That’s equivalent to the mass of 480 adult elephants! And B.C. has more than 120 licensed marine farm sites. So yeah, a lot of poo. Now think about all of the plumes of parasites, viruses and diseases this industry spews right on the migratory paths of our native wild salmon stocks.

Sound like hyperbole? You be the judge. Reams of science published in some of the world’s top journals highlight the industry’s threat to wild stocks from sea lice parasites. On the disease front, a $37 million taxpayer-funded federal investigation — the Cohen Inquiry — concluded: “Potential harm posed to Fraser River sockeye from salmon farms is serious or irreversible.” Diseases from salmon farms can spread to wild salmon.

Just two weeks ago a new scientific paper was published that shows this risk to wild fish is even greater. It reported that a virus commonly found in farm fish is linked to a disease (Heart and Skeletal Muscle Inflammation) that typically impairs salmon hearts.

And, just a few days ago, a salmon farm reportedly spilled approximately 1,000 litres of diesel in a beautiful part of our coast, right before juvenile pink and chum salmon begin to migrate by.

This begs the question: how can the federal agency responsible for regulating this industry — the Department of Fisheries and Oceans (DFO) — allow salmon farms to exist on wild salmon migration routes when DFO is supposed to conserve and protect wild fish? Answer: Because DFO and the salmon farming industry are in bed together.

Both the federal Cohen Inquiry and an expert panel appointed by the Royal Society of Canada came to similar conclusions — that DFO may have a conflict of interest problem with the industry in relation to its constitutional mandate to conserve wild fish.

With this disease information now published, it’s more important than ever to defend B.C.’s wild salmon and remove the farms.

British Columbia has a hand in facilitating this industry too. Although the federal government regulates the industry and grants them operating licences, the provincial government is responsible for renewing tenures for each farm site.

This could explain the provincial political contribution graph below that shows at minimum, a total of $74,835 was donated to the BC Liberals ($59,360) and NDP ($15,475), complements of industry. 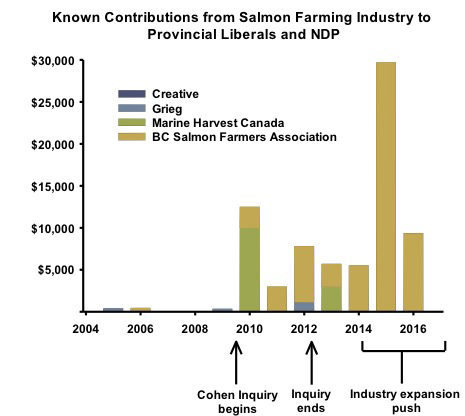 It appears contributions from industry players jumped after the announcement of the Cohen Inquiry in late 2009. Perhaps it’s because the Inquiry didn’t shy from uncomfortable truths about the industry.

As a participant in the Inquiry, I recall provincial lawyers frequently siding with the farming industry on motions and lines of questioning. The province also argued (unsuccessfully) to refrain from releasing fish farm disease data. Were industry contributions during this time meant to nudge the province to remember, “Who’s your daddy?”

As an example of provincial cheerleading — fish health staff have maintained for years that no evidence of Heart and Skeletal Muscle Inflammation disease existed in B.C., despite rigorous examinations. Now that we have published evidence, one must ask: how hard were they looking for this disease in farm fish?

Also of note, industry contributed almost $30,000 in 2015 alone, all to the BC Liberals. Backstory: Around this time the industry was pushing federally for an expansion in B.C. Behind the scenes, I heard the feds were OK to approve expansion licences, but some high profile B.C. business leaders who care about wild salmon were pressing the provincial Liberals to hold off on approving the new tenures. Could this be why all that money came in around 2015 from the BC Salmon Farmers Association? Then, in July 2015, the province appeared to do its best to appease both parties. They approved a few tenures for industry, but stopped there and set-up a committee to “study” the situation, perhaps to placate the pro-wild salmon business owners.

Even more interesting are the shenanigans recently reported by the Globe and Mail about the BC Salmon Farmers Association (BCSFA). According to the article it’s illegal to, “make a political contribution and then be reimbursed by an organization or individual.” The B.C. law is, “trying to guard against potential corruption or the appearance of corruption.”

The story also reported that a lobbyist sometimes buys fundraiser tickets for the BCSFA’s members, then the association pays him back. Remember, fundraiser tickets can be $5000 a pop. Isn’t this concealing who the real donor is — the BC Salmon Farmers Association? Is this legal?

And this is how two different campaigns can mesh well together to defend wild salmon. Banning Big Money provincially could give the province less of a reason to issue tenures to salmon farms. And through our Safe Passage campaign we can pressure the federal fisheries minister to remove salmon farms from wild salmon migration routes.

4 Responses to “Something fishy about B.C. political contributions?”