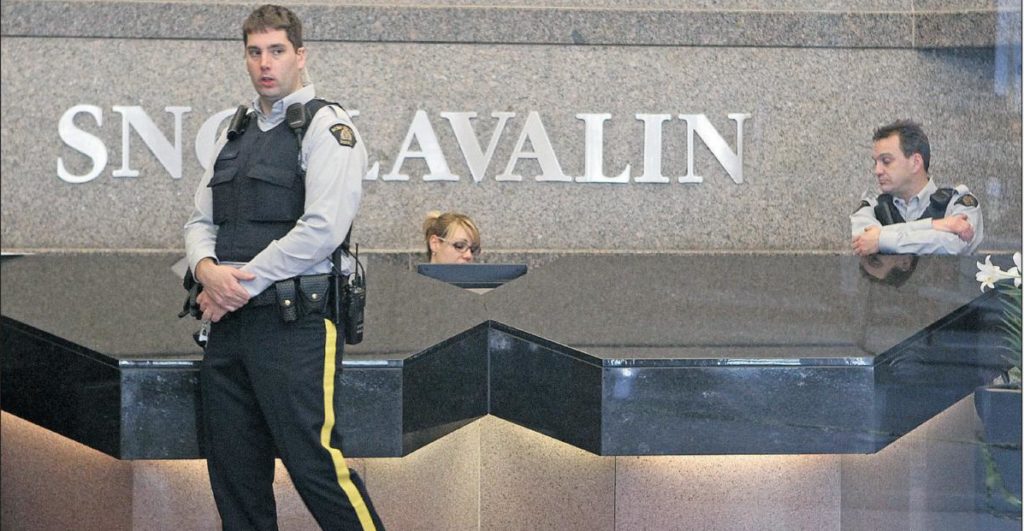 Banned internationally, jailed in Quebec, controversial in Ottawa — but it’s business as usual in B.C.

It isn’t a surprise to anyone familiar with the company that SNC-Lavalin is back in the news again. The allegations coming out of Ottawa against the engineering giant are fascinating, but not shocking. SNC-Lavalin featured prominently in Quebec’s Charbonneau Commission and is internationally infamous for corruption and fraud. Given their torrid history, it’s no small stretch to imagine they could have pressured the Prime Minister’s Office.

With such a lengthy rap sheet, why has SNC-Lavalin continued to be awarded massive government contracts in B.C.? And why are they still being considered for upcoming projects in our province, including the Pattullo Bridge replacement and the Broadway subway station?

In February 2015, the Montreal-based company was charged with corruption and fraud by the RCMP for work they had done in Libya. SNC-Lavalin is accused of embezzlement and bribery paid to dictator Muammar Ghaddafi’s family in order to receive construction contracts. If they were to be convicted, the company would no longer be able to bid on Canadian government contracts, which makes up a significant chunk of their business. Government contracts were estimated in 2016 to make up about 20 per cent of the corporation’s business. They signed at least $68 million in contracts for the federal government last year alone.

When the Liberals won the federal election and Justin Trudeau moved into the Prime Minister’s Office, SNC-Lavalin lobbied the new government for a change to the Criminal Code that would allow what are essentially plea bargains for corporations accused of serious crimes. This became law in June 2018 — tucked away in a corner of a massive omnibus budget bill — and SNC-Lavalin set out to secure one of these “deferred prosecution agreements.” But prosecutors refused to play ball.

That’s when, sources allege, the most senior figures in the Liberal government embarked on a months-long campaign to pressure the Attorney General, Jody Wilson-Raybould, to call off the prosecution.

It is worth noting that in 2016, Elections Canada found $118,000 in political contributions to the Liberals and Conservatives were donated illegally by SNC-Lavalin. It seems company employees and their spouses were asked by company leadership to donate to the political parties and then were reimbursed by the company, a practice that started as far back as 2004.

It is worth examining the company at the heart of this scandal — and it makes you wonder what kind of politician would make a deal with them. SNC-Lavalin is recognized as a bad actor both at home and abroad.

The multi-million dollar bribes for the Ghaddafi family in Libya — including a luxury yacht and penthouse apartments in Toronto — provide just one window into how the corporation operates. SNC-Lavalin was blacklisted by the World Bank for corruption in Bangladesh and Cambodia. It has been accused of bribery for a power station project in Kerala, India.

In 2013, Canada topped the World Bank corruption list — 117 of the 250 blackballed companies were based in our country. 115 of those 117 belonged to SNC-Lavalin and its affiliates.

And they’re not just accused of bribing officials in tin-pot dictatorships overseas. As a major contractor in Quebec, SNC-Lavalin was at the centre of the Charbonneau Commission. The company is facing charges in Quebec for fraud related to Montreal’s Jacques Cartier Bridge. Earlier this month, former CEO Pierre Duhaime pleaded guilty to bribery related to a contract to build the McGill University Health Centre, a $1.3 billion superhospital. He is now serving 20 months on house arrest. Senior executive Riadh Ben Aissa pleaded guilty to using forged documents related to the hospital and is currently serving 51 months in prison.

You’ve probably seen SNC-Lavalin’s signs a little closer to home. While the company is not allowed to work on World Bank contracts, and still faces a possible ban on Canadian government contracts, it continues to be involved in a number of projects in B.C.

In the past, the company enjoyed a good relationship with the BC Liberal government. Former Transport Minister Todd Stone publicly defended them. Former Premier Christy Clark was very close with SNC-Lavalin’s board chairman, Gwyn Morgan, who advised her on her leadership transition and, along with his wife Patricia Trottier and his company EnCana, was a huge donor to her party. All told, Morgan’s personal, family and corporate donations to the BC Liberals totalled more than $1.5 million.

SNC-Lavalin itself donated more than $27,600 to the BC Liberals — during the same period of time that they were donating to politicians in Quebec in exchange for contracts, and circumventing federal donation laws. Of course, back then B.C. had no limits on political contributions.

During the BC Liberals’ time in office, SNC-Lavalin received a number of high profile government contracts including Kelowna’s William R. Bennett Bridge, the Canada and Evergreen Skytrain Lines (where employees say they were poorly treated), the Sea to Sky Highway and the John Hart dam in Campbell River. They were also involved in the development of the Compass Card system, as well as projects with BC Ferries, and both the Kelowna and Vancouver airports. SNC-Lavalin was also an environmental consultant for Site C, and performed the environmental assessment for the recently cancelled Fraser Surrey Docks project, during which they were accused of bias.

But the company is not in our rearview window yet. SNC-Lavalin is currently being considered by the provincial government for the contract to replace the Pattullo bridge. And Metro Vancouver mayors are alarmed by the possibility the company could still get work on the massive UBC subway project.

It seems SNC-Lavalin believes they can operate with impunity. They have been accused of bribery, embezzlement, corruption and fraud in every corner of this country and the world. It would be naive to think B.C. is exempt. We need to ask some serious questions about how SNC-Lavalin has conducted its business here.

If Jody Wilson-Raybould had not stuck to her principles, we might never have known what was really going on in Ottawa. What will it take to learn the truth about our province? Protection for whistleblowers, the ability to subpoena witnesses and have them testify under oath, uncensored access to documents — all things available with a public inquiry.

With headlines flowing in weekly about fentanyl dealers laundering their dirty cash through B.C. real estate, casinos and supercar dealerships, the calls for an inquiry have been deafening. British Columbians want to know what happened to make our province such a fertile hotspot for crime.

But what if it didn’t stop at money-laundering? The power of an independent public inquiry is that once it’s set in motion, it can follow the trail of breadcrumbs wherever it leads. In a province where corrupt and greedy corporations had free rein for so long, I wouldn’t be surprised to see major government contracts, political donors and titans of industry come under the microscope before too long.