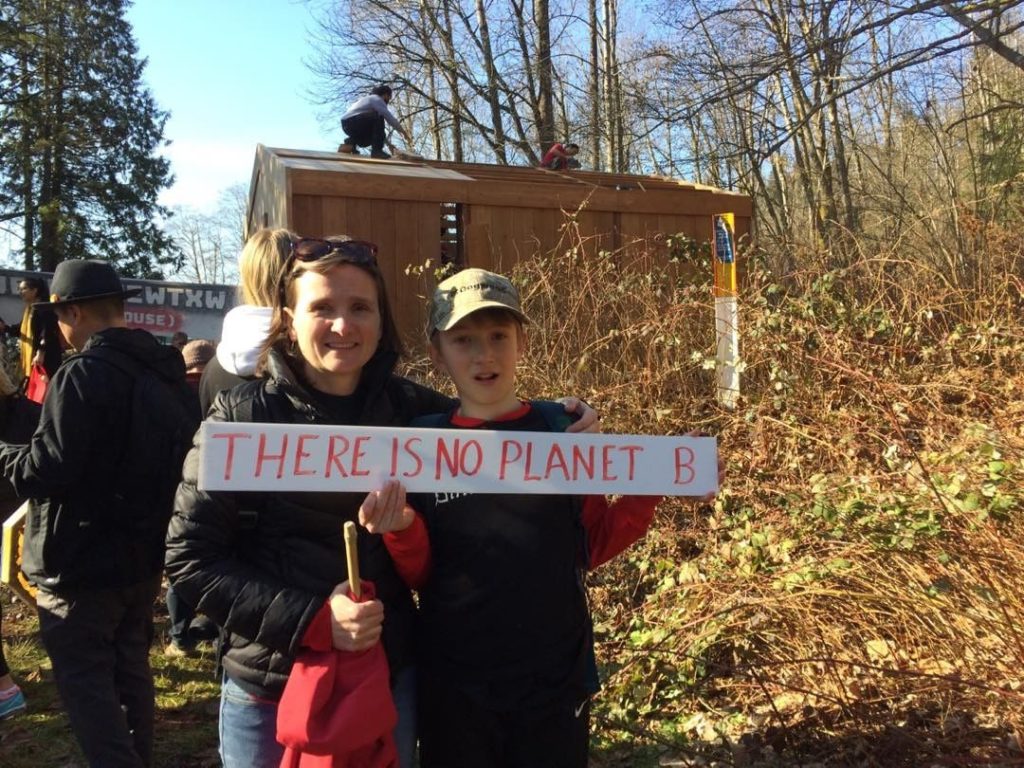 My sons and I pass the Kinder Morgan tank farm on our way to school in the morning and on our way home in the evening. Every day we get a glimpse of the work the company is continuing to do to clear trees and prepare for supposed construction of new tanks. It hits me right in the gut to see trees torn down on the mountain I call home.

But as hard as this is to witness with my very eyes, my heart is full of hope because this is only one part of the story. That’s why I’m so excited and proud to see Dogwood volunteer teams hitting the phones this week to help thousands of British Columbians comment on the B.C. government’s proposed oil spill regulations.

I know what you’re probably thinking. The Prime Minister is talking about bailing out Kinder Morgan with taxpayer dollars and I’m talking about provincial spill regulations? Has Dogwood gone delusional?

I get it. It is a weird time because we are winning to a degree we’ve never experienced before. It just doesn’t feel that way on the ground or in the airwaves at the moment because of oil industry pushback, complete with pro-pipeline media coverage around unfavourable polling numbers and “national interest” fear mongering. But the facts are the facts — Texas is ready to walk.

If you need more reassurance that Kinder Morgan is indeed headed for a dead end, here are six things that make me feel confident.

Kinder Morgan and the federal Liberal government are conspicuously not talking about the still pending legal cases challenging federal and provincial approvals of their pipeline and tanker proposal. As Indigenous leaders have pointed out, B.C. First Nations have constitutionally-recognized rights to be at the table as decision-makers on the land they still hold title to. Kinder Morgan has fewer agreements with First Nations now than it had one year ago. What the company is not telling the media and the public is that those agreements don’t necessarily mean the Nations have consented to the project, and dozens of other Nations stand firmly opposed. You can’t build a pipeline unless you have the support of the Indigenous title holders from each of the impacted Nations.

As the National Observer just broke this week, there is evidence the federal government had already decided to approve the project while still pretending to be consulting and negotiating in good faith with the Tsleil-Waututh and other First Nations. If Kinder Morgan and the federal government lose even one of those pending cases, the project cannot move ahead as planned.

2. Kinder Morgan’s Texas executives are preparing for an exit

As sickening as it is, the work at the Burnaby Mountain tank farm, the giant machinery at the Westridge Marine Terminal, and the pipes arriving at stockpiling locations in Coquitlam and Kamloops are all part of the “essential” work that Kinder Morgan could not stop two weeks ago when it decided to suspend new spending. Those contracts were already underway and Kinder Morgan is prepared to carry them through — the costs will be relatively minor to the multi-billion dollar corporation when they walk away from the project.

Meanwhile, CEO Steve Kean admitted to Kinder Morgan’s investors last week that the Trans Mountain expansion may be “untenable” for the company to move forward with — in spite of ongoing negotiations with the federal government over taxpayer investment.

3. The business case will never add up

No one else can make money off this thing. Kinder Morgan has already tried to find investment partners for this doomed pipeline and tanker project, and they’ve still come up short on the cash they need to get it done. Now, the liabilities are too high for any other company to want to buy the whole thing from the Texas company. Plus, it doesn’t look like Asian markets are interested in buying tar sands sludge even if they do have capacity to refine it.

This is Kinder Morgan’s other big tell. The company still has not met all the conditions the National Energy Board imposed with its 2016 approval of the project. They still don’t have a final route approved through huge swaths of British Columbia. Not only that — the company recently asked the NEB to delay their upcoming hearings. Everyday residents of the Fraser Valley were ready with their detailed submissions, but Kinder Morgan was not. This is a long-standing pattern for the Texas company, which has literally never built a pipeline in Canada before.

Even more significant, the NEB rejected Kinder Morgan’s attempt to get out of its responsibility to have cash on hand in the event of an oil spill (they would be responsible for paying for the response). It’s not just because they’re a company with a bad track record — they straight up don’t have the money.

5. Most Canadians oppose a taxpayer-funded bailout

Nothing can unite the two sides of the political spectrum like a huge whack of corporate welfare. If the federal Liberals try to keep Kinder Morgan or a new buyer in the game — or propose buying the whole line, tank farm and marine terminal itself — they’ll face a bigger public backlash than ever. And British Columbians will still do whatever it takes to stop the project. And there will still be Indigenous Nations with constitutionally-recognized rights and title in the way.

6. The B.C. government is not backing down

The Attorney General’s special counsel will bring his question to the province’s highest court by April 30. Instead of engaging in wild rhetoric, our provincial leaders are going straight to the courts to prove B.C. has the jurisdiction to restrict the expansion of diluted bitumen shipments and study the associated health and safety risks. With thousands of British Columbians keeping their feet to the fire, the B.C. government will see this through and proceed in its resolve based on the court’s ruling.

So, mobilizing to get people commenting on B.C.’s proposed oil spill regulations? It’s not what’s in the headlines or on the frontlines. But this is the kind of democratic action that will help cement the B.C. government’s opposition to Kinder Morgan for good — and will get us far better protections against oil spills of all kinds in our province for decades to come. We’re already working together on the brighter future that awaits us on the other side of beating Kinder Morgan.

If you haven’t submitted your comment yet, do it now! If you want to help us phone and text other supporters before the deadline, sign up for a volunteer event near you.