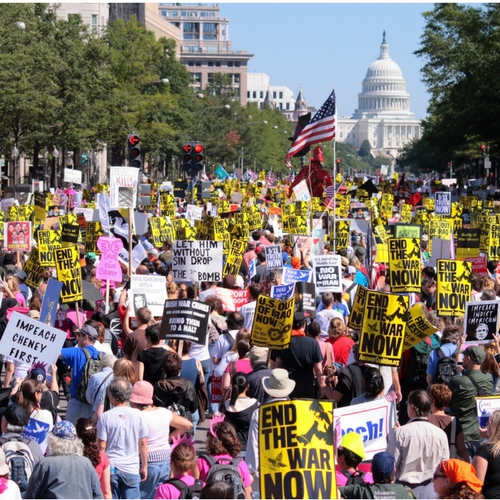 How do we save the climate from President Trump?

The power of local resistance in the face of destructive political forces.

I was in my last year of high school when U.S. President George W. Bush decided to invade Iraq. Driven by grief and a sense of helplessness (I couldn’t even vote, let alone in America) I did the only thing I could: I joined protest marches. During that spring in 2003, I watched the crowds grow beyond anything I’ve seen before or since in Vancouver: 10,000 at a rally in January, then 40,000 in February as millions of people across the globe cried out for the President to stop.

It wasn’t enough. The war went ahead, and the whole world is still suffering the consequences. But the outpouring from Canadians was enough to cement the Chretien government’s position against the invasion, despite support from the Canadian Alliance party, led by Stephen Harper. The Alliance subsequently lost the 2004 election.

Congratulations to Donald Trump on his impressive victory. Canada/US partnership is strong. There is much to do, incl moving ahead with KXL.

Keystone is not the only fossil fuel mega-project supported by President-elect Trump, who famously believes that climate change is a hoax perpetrated by the Chinese government to undermine the U.S. economy. Trump has given his blanket support to fracking, drilling, coal mining and oil transport, vowing to cut regulations, roll back climate action and walk away from the Paris Accord.

That’s not something we have control over in Canada. But in their grief and helplessness, I predict Canadian voters will inflict heavy consequences on politicians who align themselves with Trump’s policies, including his apocalyptic vision of a fossil-fueled future.

There are other lessons from Trump’s victory – and Hillary Clinton’s defeat – that should give Canadian politicians pause. Last night was a stark repudiation of old-school establishment politics. Anyone still relying on big-ticket fundraisers, pork-barrel cronyism, traditional polling or friendly media outlets should be very worried. There’s a backlash building, and it transcends the traditional political spectrum.

Justin Trudeau and Christy Clark’s cash-for-access dinner parties, friends in high places and we-know-best approach to policy are reminiscent of the Democratic Party when it was riding high. That puts Canadian liberals in a tough spot. If they alienate grassroots conservatives with their lavish spending and elitist ways – but also alienate progressives by aligning their pipeline plans with Trump’s pro-oil, anti-science administration – they’re in big trouble.

I don’t want to diminish the tragedy of what happened in the United States last night. My American friends and many Canadians are in tears today, fearful for how a Trump presidency will hurt women, the LGBTQ community, Black, Indigenous and Latino communities, Muslims, Jews, veterans, people with disabilities. Sadly, even the downwardly mobile white people who gave Trump the win are likely to suffer further once he takes power.

But the same combination of disenfranchisement and cheap digital technology harnessed by Trump’s campaign also gave us Bernie Sanders and Standing Rock.

We’re entering an era of populist, mobile-driven movement politics. As Trump toured the “Rust Belt” of America in the final days of the campaign, he told workers in each factory how many jobs they had lost. It was another reminder that all politics is local. If we can find a way to use communications tools to harness that ground-level feeling of having your home destroyed by faraway elites, I think we stand a fighting chance.

After all, there’s a reason Mr. Harper is cheering on Trump from the sidelines rather than the Prime Minister’s office. His policies created an existential threat for thousands of voters – First Nations families living in grinding poverty, students and young workers with no economic future, British Columbians defending their health and safety from the global oil and coal industry. Those people rose up and tossed him out.

The key is to tap into that emotional reality without scapegoating our neighbours. We need to direct what are legitimate feelings of fear and anger toward the people who hold real power over our lives.

Unlike the Iraq War, we actually can slow down the destructive force of climate change with local action. That’s what threatens coal plants in China as people lash out against an authoritarian regime that is choking their children with toxic ash. On the supply side, Trump’s emergence as the pro-coal, Big Oil boogeyman could spur a lockdown on carbon exports, especially in the Pacific Northwest.

Reducing dangerous climate pollution means keeping coal, oil and methane in the ground. That will come down to local resistance – political, legal, maybe physical. And the more President Trump cracks down on protesters, the harder he pushes to build pipelines through tribal land, the more I think he will galvanize opposition around the world.

The storms are coming. As our glaciers deteriorate, drought and wildfires intensify, we face a tipping point every bit as dangerous as that spring in 2003. We can’t afford to get this wrong. Having a monster in the White House does not absolve us of the moral obligation to keep fighting, wherever we call home.

Tomorrow I’ll talk about two key lessons we need to learn from the Republican Party, and how organizers can put them into practice in B.C.

7 Responses to “How do we save the climate from President Trump?”