Outdated laws, weak enforcement leave the public on the hook for cleanup

The scale of the Mount Polley mine disaster is difficult to comprehend. We’ve read that Imperial Metals dumped 25 billion litres of contaminated slurry into Quesnel Lake, most of which they never recovered. That mud was laced with chemicals including arsenic, mercury, selenium and lead. But how much actually spilled when the dam failed?

Think of a standard four litre milk jug (or if you grew up with the Imperial system, a gallon of milk). Six of those jugs would hold 24 litres of mine waste. Now imagine walking past a line of those plastic milk jugs, each one a little over 15 centimetres across. Every kilometre you would pass 6,561 jugs, or 26,244 litres of tainted grey mud.

You would have to line up 952,500 kilometres of milk jugs to hold all the mine waste unleashed when the Mount Polley “tailings pond” burst. It’s not a pond. It’s a toxic lake visible from space. Here it is last summer, patched up and back in operation: 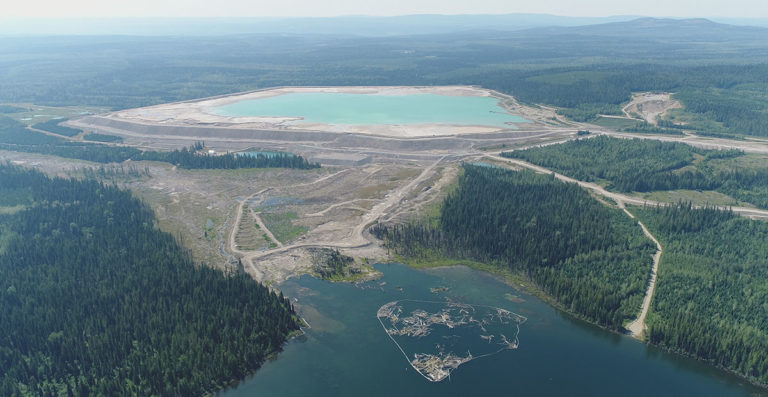 I couldn’t fully wrap my head around what happened at Mount Polley until I drove out there with my family. Bumping along on a forest service road high above Quesnel Lake, we realized what is meant by “inland rainforest”: we were surrounded by huge cedar and hemlock trees, with patches of salal and devil’s club.

We stopped for a lynx that was running along the edge of the road, waiting until it darted into the forest. Then we got to Hazeltine Creek and the trees just ended. The creek used to be 1.2 metres (four feet) wide, supporting spawning populations of salmon and trout. But on August 4, 2014 a wall of mine waste roared through, snapping off trees like matchsticks and carving a canyon into the bedrock.

Four years later I stepped out of my vehicle and into an eerie silence. I could hear the gurgle of Hazeltine Creek in its new artificial channel. But that was it. There were no insects or birds. A haze of wildfire smoke hung over everything. It reminded me of the photos of battlefields from World War One.

Polluters don’t pay, we do

It struck me again that the company responsible, Imperial Metals, has never faced a single charge or fine. You can bet if you dumped a milk jug full of toxic waste into a spawning channel – and got caught – there would be hell to pay. But so far the people responsible for the biggest mining disaster in Canadian history have escaped any penalty.

In fact, taxpayers have subsidized the company’s attempt at cleanup, to the tune of nearly $40 million. Mount Polley crews pushed some dirt around and tried to plant some bushes, but the vast bulk of the waste spilled in 2014 still sits in Quesnel Lake – or has washed down to the Fraser River. Given that I helped pay for the “restoration,” I was pretty disappointed in the results. 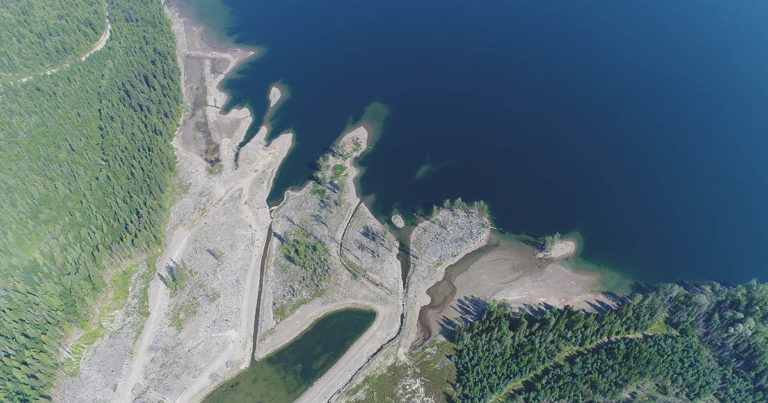 The mouth of Hazeltine Creek in 2018.

The company’s real focus was getting back to operation so they could keep mining gold. In fact, in one of her final acts as premier, Christy Clark gave Imperial Metals a permit to pump waste directly into Quesnel Lake. The idea is that it solves the problem that made the tailings dam burst in the first place: being too full.

The Concerned Citizens of Quesnel Lake, a kitchen-table group of residents affected by the disaster, will be challenging that permit at an Environmental Review Board hearing in May. We should all hope they succeed in stopping further injury to the lake, which is home to a quarter of the province’s sockeye salmon.

But who will pay for the damage already done? And who will pay the next time this happens, and the next time after that? Under current laws, we will. The cover image for this article was taken by Chris Miller at the old Tulsequah Chief mine in Northern B.C., which has leached acid drainage for decades since the project went belly-up. B.C. citizens are now paying to clean it up.

The NDP provincial government let the clock run out on filing charges against Imperial Metals. When former Xatśūll chief councillor Bev Sellars put together a private prosecution against the mine owners, provincial prosecutors took over the case – and dropped the charges. Just like Christy Clark’s approval of the Trans Mountain oil tanker expansion (which like Mount Polley, came with huge corporate donations), the new government says their hands are tied.

That leaves the federal government. The Department of Fisheries and Oceans has until the five-year mark to lay charges against the company for destroying salmon habitat. That window will close forever in August 2019. That’s why Dogwood has joined efforts by the Concerned Citizens of Quesnel Lake, Xatśūll First Nation members and many others who want to see consequences for this disaster.

It’s been years since we had a fisheries minister from British Columbia. Jonathan Wilkinson represents the coastal riding of North Vancouver. And he needs to hear from you. Please take a few seconds to send him a message, telling him you expect him to enforce the law – and hold Imperial Metals accountable.

If we don’t make an example of Imperial Metals – if we let this disaster slide into the rearview mirror – we will be poorer for it as a people. Not just in terms of the millions we spend cleaning up after mining companies, but in our identity and self-worth as a province. So far the message to industry is clear: come to B.C., take our wealth, poison the water, kill the fish. Don’t worry, we’ll tend your tailings lakes and contaminated sites decades after you go bankrupt.

No more. It’s time to make them pay.

MPs must push for transparency around ‘national emergency,’ swift expiry Eighty years ago my dad’s parents were accused of being enemies of Canada, because their parents were born in Japan. Under the War Measures Act, 22,000 Nikkei settlers were forced from their homes, stripped of their assets and property, and interned under RCMP guard. The […]