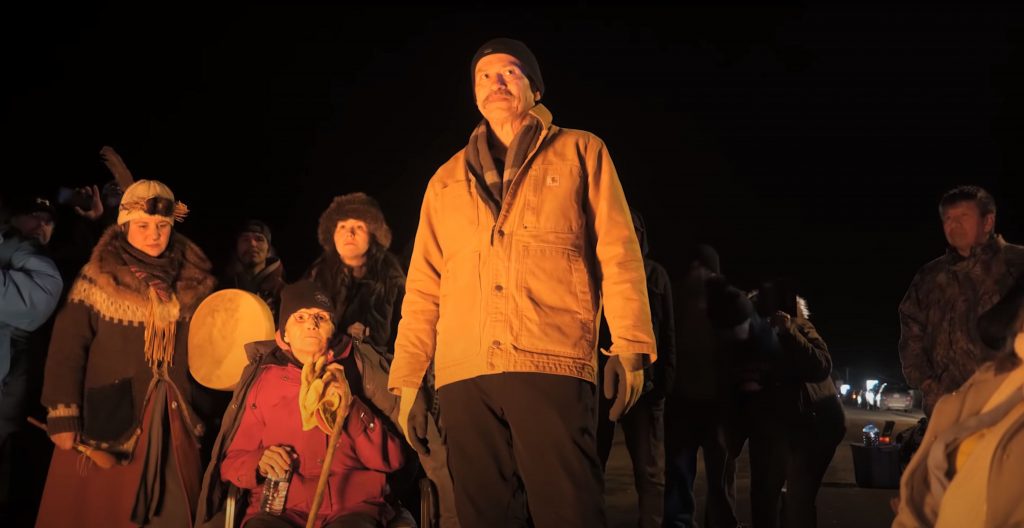 Oil companies have a new strategy to put opponents in jail. B.C. is their testing ground.

Corporate lawyers, backed by American billionaires, have won the right to privately prosecute Indigenous people in Northern B.C. for peacefully standing on their own land.

In February 2020, after the second militarized police raid on Wet’suwet’en territory, three Gitxsan hereditary leaders halted CN Rail traffic in the town of New Hazelton, demanding the release of their neighbours and allies.

Instead, CN Rail got a court injunction and had the Gitxsan chiefs arrested, along with 10 family members. Two years later, they’re still being dragged through court. 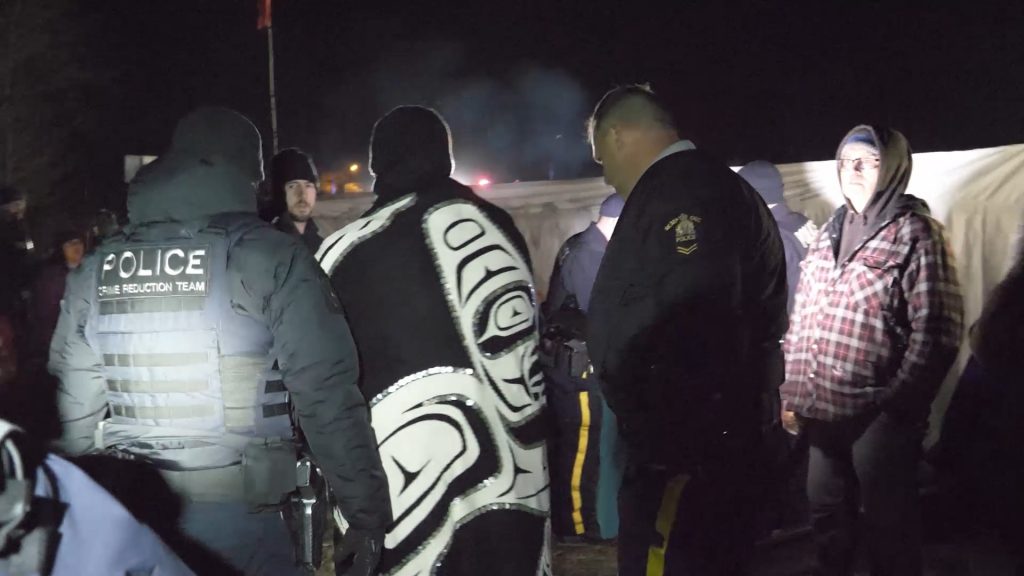 Gitxsan hereditary chief Spookw (in regalia) is arrested by the RCMP on his own territory in February 2020.

Police failed to record video of themselves reading the injunction to most of the accused, making it hard to prove that people were even aware of the injunction. Lawyers for the B.C. Prosecution Service advised the judge that contempt charges were unlikely to stick to 10 of those arrested.

The same Crown prosecutors argued there was “no public interest” in pursuing criminal contempt charges against the remaining three. But the judge ruled the trial will go ahead anyway, with CN’s lawyers serving as the prosecutors. If found guilty, the maximum sentence is five years in prison.

It’s part of a disturbing trend toward private policing, and prosecution, in conflicts over resource extraction on unceded Indigenous lands.

Two months later, private security guards for both CN Rail and Coastal GasLink have teamed up with police, taking turns watching the train tracks in New Hazelton 24 hours a day.

Last year in Burnaby, Indigenous elders Stacy Gallagher and Jim Leyden were sentenced to prison on criminal contempt charges, based on surveillance by private security guards working for the Trans Mountain pipeline company . The two were filmed conducting ceremonies near the gates of the tank farm, and informed of the charges weeks later. 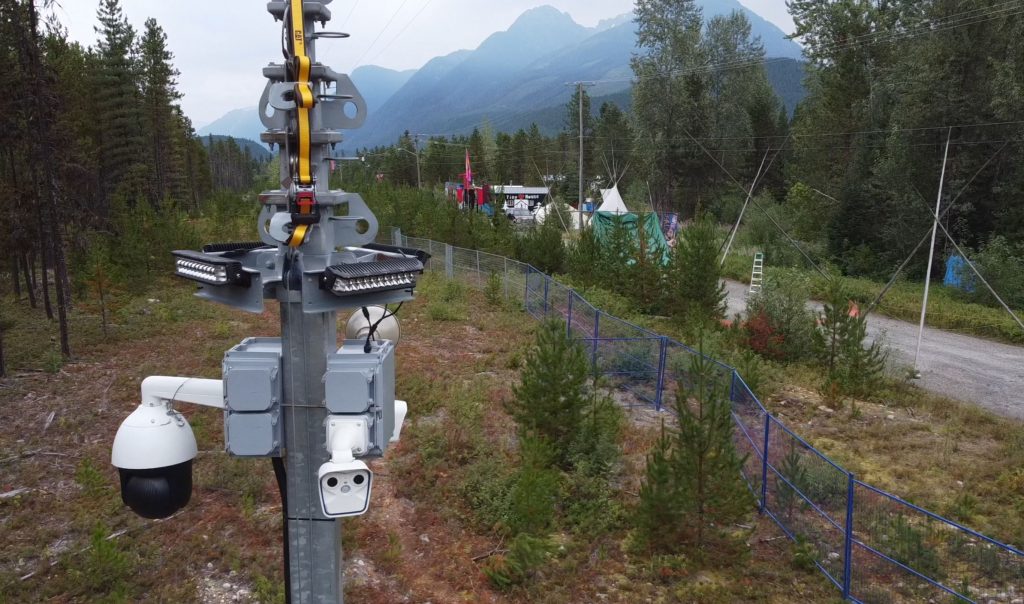 In Blue River at the Tiny House Warriors village, Trans Mountain contractors were filmed physically tackling and holding Secwepemc land defenders for arrest by police. Trans Mountain has also pioneered the use of automated injunction enforcement, with robotic cameras on surveillance towers that blare warnings from loudspeakers when motion sensors are triggered.

The growing trend of private prosecution

The judge in the Gitxsan trial cited a recent case in Vancouver, where six people who participated in another Wet’suwet’en solidarity blockade pleaded guilty to criminal contempt after a private prosecution by lawyers for the Port of Vancouver.

The most high-profile example is that of American attorney Steven Donziger, who is serving a sentence in New York for criminal contempt. Donziger helped win a historic settlement on behalf of Indigenous people in Ecuador whose land was polluted by Chevron. He was prosecuted by Chevron lawyers and convicted by a judge who served on the board of a right-wing campaign group funded by Chevron.

Judges say if they don’t punish people for defying their orders, the reputation of the courts will suffer. But serving as the jailers for billionaires and oil companies hardly inspires confidence in the administration of justice, either.

These private prosecutions are clearly part of a strategy to crush opposition to resource extraction on Indigenous lands. The corporations use public institutions like police and prosecutors when it suits them. But increasingly they are taking matters into their own hands.

CN Rail used to be a federal Crown corporation; it was sold off to mostly American investors in 1995 by finance minister Paul Martin. The company held onto its private police force – security guards with guns and powers of arrest on both sides of the border.

CN is now a hugely profitable multinational that ships crude oil, pelletized forests and other stolen resources all over the continent. Its biggest shareholder is Bill Gates, the fourth-richest person in the world.

A year ago Gates held $16.3 billion in CN Rail stock through Cascade Investment and the Bill & Melinda Gates Foundation Trust. His personal investment manager sits on CN’s corporate board. Some of Bill Gates’ CN shares were transferred to his ex-wife Melinda French Gates as part of their divorce settlement, but he remains CN’s largest investor.

The Gitxsan never consented to the seizure of their land for what was then the Grand Trunk Pacific Railway, more than 100 years ago. No payment was made, no treaty or bill of sale ever signed. Under Gitxsan law it’s CN Rail that’s trespassing, not the other way around.

What happened to UNDRIP?

In 1997 the Gitxsan and Wet’suwet’en proved in the Supreme Court of Canada that their collective title and rights had never been extinguished across 58,000 square kilometres of land. Both Coastal GasLink and CN Rail cross the territories lovingly described by elders and hereditary chiefs in the Delgamuukw-Gisday’wa case.

In 2019 the B.C. legislature unanimously adopted the UN Declaration on the Rights of Indigenous Peoples, making it provincial law. Article 10 of UNDRIP affirms that “Indigenous peoples shall not be forcibly removed from their lands or territories.”

Yet corporations like CN Rail, Trans Mountain and Coastal Gaslink are using sweeping, multi-year injunctions to block off hundreds of square kilometres of unceded Indigenous land, then jailing people who refuse to recognize their property claims.

By granting injunctions to these companies, judges open the door to enforcement by the RCMP. And by approving each request by the RCMP to redeploy officers to these territories, B.C. cabinet ministers have unleashed militarized raids that make a mockery of “reconciliation”.

The good news is the Wet’suwet’en and their neighbours are not easily intimidated. After being arrested on his own land, Gitxsan chief Spookw has raised nearly $100,000 from the public to cover legal defence costs for the chiefs and family members criminalized alongside him. Chip in if you can – this will be a long battle, and they must not be left to fight it alone.

Larger questions remain for B.C. lawmakers. Why are corporations allowed to apply for injunctions on unceded Indigenous lands? The Wet’suwet’en chiefs offered an alternate pipeline route – why launch police raids instead of negotiating with the title holders? Why allow private police and private prosecutors to put Indigenous people in jail?

As MLAs dither and delay, their constituents are turning to local leaders who will actually take action to stop climate change and ecosystem destruction. In many places, those are the same Indigenous governments that British Columbia has spent 150 years trying to destroy.

UPDATE: After publication of this blog post, CN spokesperson Jonathan Abecassis emailed the following. “CN is satisfied that this injunction was ultimately enforced and does not intent to pursue criminal contempt against the protesters.”