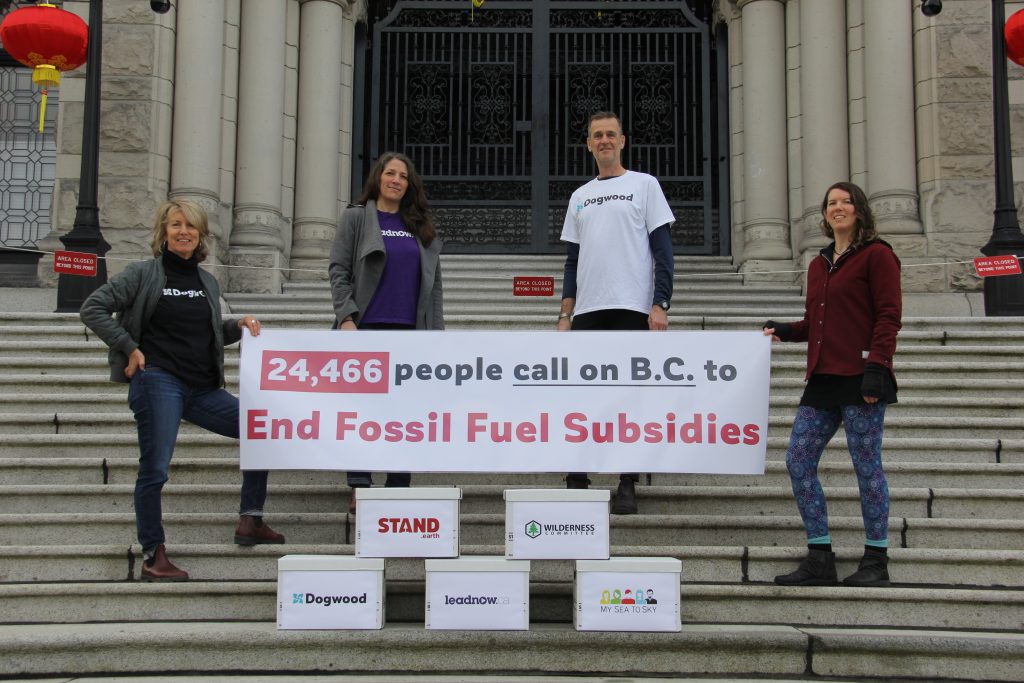 LEKWUNGEN TERRITORIES / VICTORIA: Today at the B.C. Legislature, a petition signed by nearly 25,000 British Columbians calling for all fossil fuel subsidies to be abolished was delivered to representatives for Energy Minister Bruce Ralston.

The petition delivery comes as the government prepares to release the provincial budget next week amid a growing public outcry over steadily rising taxpayer support for oil and gas companies.

A recent government survey found the large majority of British Columbians want the oil and gas royalty system to be overhauled, including scrapping ballooning tax credits to the fracking industry in an effort to fight climate change. Advocates hope to see this reflected in next week’s budget.

“Climate disasters touched the lives of everyone in B.C. this past year,” said Alexandra Woodsworth of Dogwood, one of the groups who presented the petition today. “But even as they spend billions to repair washed out highways, politicians are still pumping money into the fossil fuels that are making floods and fires more frequent. Next week’s budget will be an important test of this government’s commitment to keeping our communities safe from a rapidly changing climate.”

Fossil fuel subsidies have doubled since the NDP came to power, according to analysis by Stand.earth, and are now five times larger than what the oil and gas industry gives to the province in royalties. An expert report commissioned by the B.C. government concluded that the current royalty system does not align with the province’s climate goals, and actually helps fracking companies drill new wells that would otherwise be unprofitable.

“The BC NDP government has heard loud and clear that people in this province want a new royalty system to make the most polluting companies pay the full costs of fossil fuel extraction,” said Peter McCartney, Climate Campaigner with the Wilderness Committee. “They need to listen to what the people want instead of the fracking lobbyists banging down their doors.”

Also today, the International Institute for Sustainable Development released a new tally of provincial fossil fuel subsidies, which found that B.C. is second only to Alberta in its support for oil and gas companies. The report outlines how subsidies are driving up oil and gas production, and delaying the transition to renewable energy.

“Ongoing subsidies and tax breaks for fossil fuel companies incentivize fracking, gas pipelines and LNG export facilities that are not economically viable without these massive public handouts,” said Tracey Saxby, marine scientist and Executive Director of My Sea to Sky. “Investing public money to prop up fossil fuels delays the transition to the renewable economy. We need to be investing in our future, not propping up the fossil fuel economy of the past.”

“The Royalty Review is a huge opportunity to roll back some of the province’s largest fossil fuel subsidies, in particular the Deep Well Royalty Credit,” said Sven Biggs, Canadian Oil and Gas Program Director for Stand.earth. “But the government’s recent commitment to eliminating ‘inefficient’ subsidies is a red flag: if they just replace old fossil fuel subsidies with new ones, that would be unacceptable.”

Sonia Theroux, Executive Director of Leadnow, added: “People have historically looked to the NDP to protect workers. But by continuing to prop up a dying industry, they are taking money that could be securing the jobs of the future and instead throwing it down a dead end jobs and energy strategy. Workers need better leadership.”

The petition signatures were gathered by Dogwood, Leadnow, Stand.earth, Wilderness Committee and My Sea to Sky. Senior Advisor Raori Richardson accepted the petition on behalf of Minister Ralston.