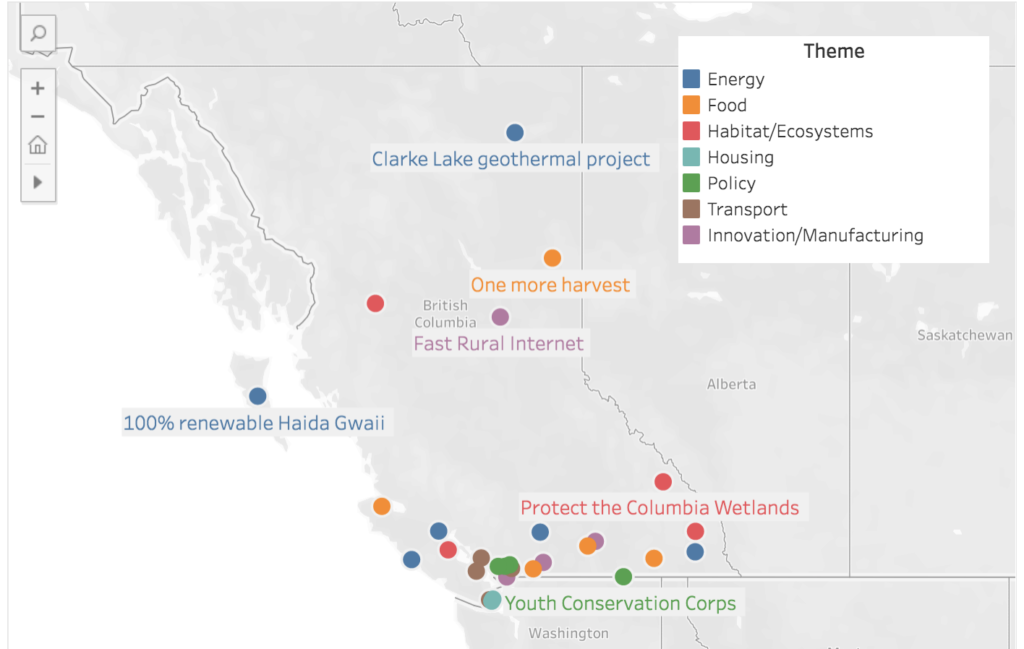 Our roadmap to a better B.C.

British Columbians have a wealth of ideas about how to build a just, healthy and sustainable future. But it’s up to our elected leaders to make it happen.

If not now, when?

The escalating climate crisis was pounding at our door, warning us we were heading in the wrong direction, when COVID-19 swept our legs right out from under us. As we get back up and begin to step down the road to recovery, we have an unprecedented opportunity to shift our society in a different direction. To put people back to work building stronger communities that can withstand climate impacts, protect the natural world and dismantle historical inequities.

We know the appetite for this shift is strong: just look at the national movement for a #JustRecovery. But we also know that legacy industries like mining and big oil are fighting tooth and nail to get back to business as usual, and keep us stuck on the old path. Billions of dollars of government stimulus funding are on the line, and we’re at a crossroads.

Business as usual or a moment of transformation?

Early signals out of the B.C. government weren’t encouraging. A few weeks ago, we joined a conference call with Premier Horgan to raise concerns that the Economic Recovery Task Force struck to guide the roll-out of billions of dollars in stimulus spending was heavily weighted to big business, and had no representatives with experience tackling the climate crisis, or building a locally-focused, resilient economy.

We were surprised to hear the Premier say that he thought British Columbians wanted to get back to how things had been before the pandemic as quickly as possible – which was exactly the opposite of what we had been hearing. It also stands in stark opposition to recent polling, which shows that 74% of Canadians expect a broad transformation of society as we emerge from this pandemic, rather than a return to the status quo.

So we decided to take the conversation about how B.C. should build back after COVID-19 out to our community. We sent a survey to Dogwood supporters, asking this question: “If you could pick one project to pitch to B.C. cabinet ministers with money to spend, what would it be?” The response was overwhelming: 4,000 beautiful ideas to build a better B.C.

Our survey results show that many British Columbians are well past the stage of imagining a different future. You have concrete, inspiring ideas about how to get there: shovel-ready projects that could put people back to work this summer.

You want to see Indigenous-owned solar farms. Youth bringing provincial parks back to life and replanting trees. Seniors protected in publicly-owned care facilities of the highest quality, and affordable housing for all. A 100% renewable transit fleet. You want to see the former cannery sites in once-bustling coastal communities revitalized with vertical ocean farms feeding local people and employing out of work fisherpeople. You have ideas on how to make our existing industries greener and how to grow new sources of local economic development in remote and Indigenous communities. And 99% of you believe governments should seize this moment to rebuild the economy better than it was before. 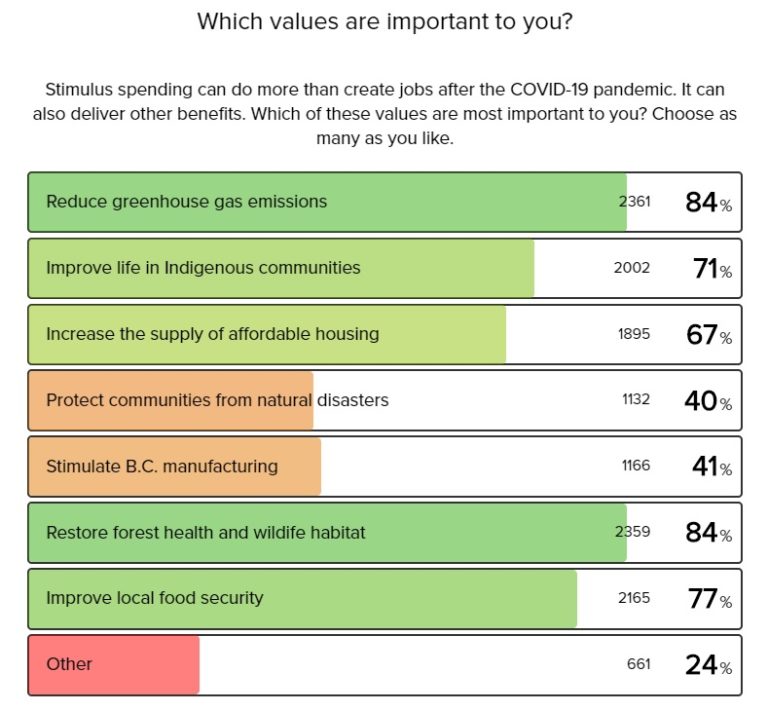 After two weeks of sifting through submissions, we’ve compiled the the top 31 projects that have rolled in so far on an interactive map. Check it out, pan around, zoom in, and see what your friends and neighbours’ vision for B.C. looks like – and add your own ideas if you haven’t had a chance yet. We’ll take the most popular projects and bring them back to government ministers.

Build Back Better for whom?

Before COVID-19 shuttered the economy, Dogwood had just launched a new campaign to make energy in B.C. 100% renewable and democratically controlled. We called it Local Power because we believe that if people could power their homes and vehicles with clean, locally generated electricity we could get our communities off fossil fuels, turn the tide on our growing emissions, and transfer power from big, foreign corporations into the hands of local people.

In the 4,000+ project ideas you submitted we saw an affirmation of that goal and plenty of inspiration about how to get there. They’re emblematic of a B.C. that meets its climate goals while ensuring nobody is left behind. Whether you choose to call that a Green New Deal or a healthy, just, and resilient recovery, you are not alone if you feel like ‘back to business as usual is the wrong direction.

Premier Horgan now says he wants to ‘Build Back Better’ and put Clean BC at the centre of the province’s recovery planning. If he’s serious, he’ll listen to the growing body of research showing that post-COVID stimulus funding represents an unmatched opportunity to build a low-carbon economy that brings security and hope to people in every corner of our province.

Our crowd-sourced map shows there is no shortage of appetite or ideas for what this transition could look like in B.C. With the stroke of a pen, the provincial Cabinet could green-light projects like these and make this shift a reality.

The question is: will the government retreat to business as usual, or take the leap and Build Back Better for the vast majority of British Columbians?

2 Responses to “Our roadmap to a better B.C.”