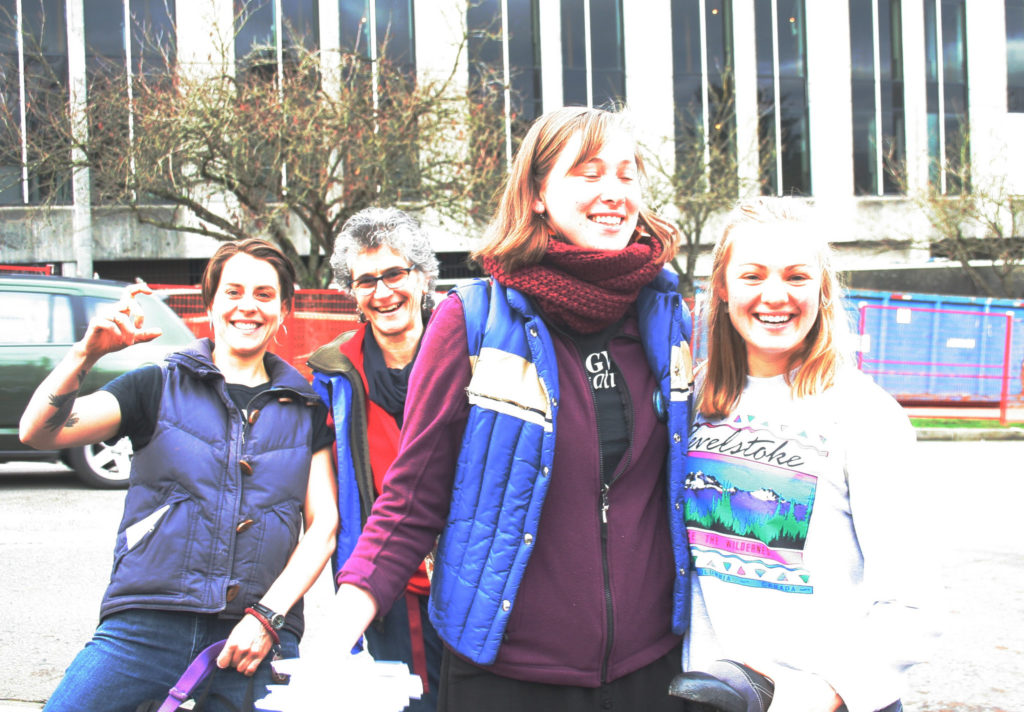 Organizing is Always the Answer

I was born and raised in Oregon. Aside from my kids and partner, all my family and most of my dearest friends are Americans who, unlike me, still live in the communities that have been riven by political and social divisions this year’s presidential election has wrought. On election night I feared for the safety and wellbeing of some of my loved ones, their communities and the fabric of my birth country.

Citizens of the world face so much uncertainty, and news of the devastating effects of inequality, hatred, division and climate change seems to have dominated the year. Symptoms vary in their extremity and required responses, but in the long term only compassion, community, respect and equity can overcome the forces that threaten humanity. This bigger, longer shift takes time and effort, but I am convinced that the only way to get there is to organize. And to start where you are.

These are the principles that Dogwood’s organizing program is built on. Organized people can steadily change the course of history. Together, we can weather the storms of political cataclysms and broken campaign promises, and survive the rollercoaster of victories and setbacks like the death of the Enbridge Northern Gateway project followed by the anticipated approval of the Kinder Morgan’s Texas tanker proposal. For us, organizing is about both action and connection.

Our teams are not just coming together around shared values to protect air, land and water, restore democracy and fight climate change–we share a commitment to act and to have each others’ backs. We don’t just hold meetings or come up with busy work. We do the unglamourous tasks that must be done: personal conversations (canvassing), recruiting more people to join our team, entering data, phoning other Dogwood supporters to help them take action and mobilizing at key moments–to get out the vote, to speak up at regulatory hearings, to support allies.

But if we organizers do our jobs right, something deeper happens too. People connect with each other. They break through the isolation and helplessness that many people feel in the face of the grave challenges in today’s world. I like to imagine that Dogwood’s organizing network like a mycelium–the branching network of fungal life that lives (sometimes for hundreds of years) under the soil’s surface and allows spores to blossom into mushrooms when the time and conditions are right.

In October hundreds of mushrooms bloomed when local teams and 110 individual Dogwood supporters in every corner of the province gathered well over 2400 Let BC Vote signatures during our Knock the Block campaign.

In the coming days you’ll be hearing from organizers, team leaders and our campaign staff inviting to you participate in a canvass action near you on December third. My challenge to you is to get a head start: organize an event in your community and post it on hub.dogwoodinitiative.org so your friends and neighbours can join you.

We’ll need the resilience and action of organizing in the months ahead. In 2017 it will be more important than ever to build teams, connect our online network of supporters and reach out to local partner groups as we build momentum towards a province-wide vote to stop oil tanker expansion once and for all. Working alongside and in solidarity with First Nations’ legal challenges, Dogwood will be recruiting and training canvassers across the province to ensure that the final decision on tanker expansion will rest with indigenous peoples and British Columbians.