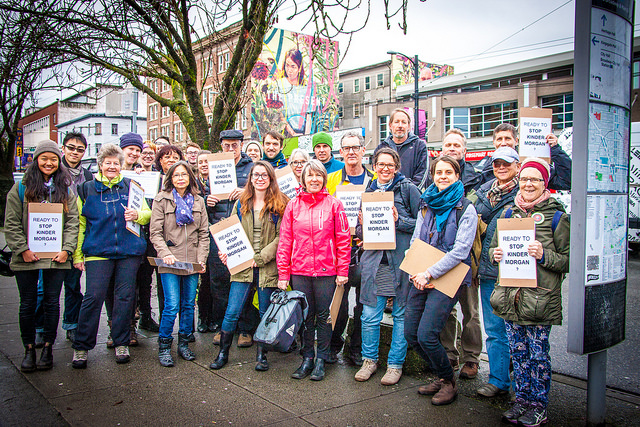 I’ve never felt more excited about the possibilities for a province where you lead and our politicians follow.

If we canvass in our communities, meet with our new MLAs and ramp up pressure online, the new NDP-Green government will have the support it needs to immediately halt Kinder Morgan, pass laws to ban big money, and start a corruption inquiry.

If we don’t, Kinder Morgan, big money donors and their friends in Ottawa and Edmonton could erode our new government’s resolve to deliver the campaign wins you’ve been fighting for for so long.

Contrary to the sound and fury coming from a Prime Minister and Alberta Premier who know their position is in danger, British Columbians and First Nations hold all the cards in deciding Kinder Morgan’s fate. The new government could settle lawsuits with First Nations, decline to issue provincial construction permits and pass new legislation requiring a health and safety review.

The government also has an unprecedented chance to follow its ban big money legislation with a corruption inquiry and finally close the door on U.S. thermal coal exports.

We cannot let this opportunity slip away.

But let’s just savour this for a moment.

Because we were ready, we didn’t have to run the campaign.

I know that seems counter-intuitive, but here’s the thing: Dogwood has steadily been organizing in local communities over the past five years, building teams of volunteers in as many places as possible and a base of support in every riding in the province.

We figured if we used the rules of B.C.’s Initiative process–connecting and training canvassers, phone-bankers and organizers in each riding and signing up 10% of voters to support our campaigns–we could build a grassroots force of democracy warriors ready to change the course of elections an influence major decisions on fossil fuel infrastructure.

It worked. Dogwood’s work to prepare for an initiative campaign to stop Enbridge in 2014 was a key part of the unified resistance from First Nations, local organizations in northern BC and Environmental NGOs that added up to stall the project despite its federal approvals.

Because we were organized, we were able to mount an unprecedented get out the vote campaign during the 2014 municipal election that helped elect dozens of No Tankers candidates in municipalities across Vancouver Island and the Lower Mainland.

From there, our investment in organizing allowed us to build more teams and an even bigger volunteer force to get out the vote in the 2015 federal election. The work of hundreds of volunteers to get Dogwood supporters to the polls contributed to a sweeping defeat of Stephen Harper’s pro-tanker government.

All this work alongside the efforts of First Nations and our civil society allies forced the new government’s hand on Enbridge. But on Kinder Morgan, the Federal Liberals caved to Big Oil and political pressure from Alberta, breaking their campaign promise to British Columbians and approving the project based on the NEB’s inadequate Harper-era review.

But we were still organized. In 2016, Dogwood volunteers helped get hundreds of supporters and dozens of speakers to the federal government’s Kinder Morgan panel process and started conversations in their communities about getting big money out of politics. We knew organized people could beat organized money, but money won the first battle.

Not only did the Federal Liberals betray B.C., our own B.C. government followed suit in January of this year — reversing its “5 conditions” opposition to Kinder Morgan after the pipeline’s backers contributed more than $780,000 to the ruling party.

Because we were organized — and had been slowly preparing for a citizen’s initiative campaign for so long — Dogwood knew we had to do two things: get out the vote in the provincial election and ramp up a plan to launch and initiative if the B.C. Liberal government bought its way back to power with big money donations.

They almost won, but organized people tipped the balance. You made thousands of phone calls to voters, registered people to vote in your community and kept canvassing. And the campaign that you took to the grassroots — Ban Big Money — became the rallying cry for both opposition parties and the election issue that toppled the B.C. Liberal dynasty.

Still, we were worried that with Kinder Morgan aggressively pursuing its fall construction timeline and Premier Clark still in power for an undetermined amount of time in volatile political climate that we would have to forge ahead to pass our own legislation — the Community Health and Safety Review Act, which would require a community assembly led by a public health officer to conduct a health review of the project. Kinder Morgan’s pipeline and tanker proposal has never undergone a health assessment.

Then on Tuesday, May 30th, the leaders of the BC NDP and BC Green party committed to “immediately employ every tool available to the new government to stop the expansion of the Kinder Morgan pipeline” and pass legislation banning corporate and union donations to political parties under a Green-supported NDP government. Clark committed to calling back the legislature in June for a confidence vote she admits she will lose in order to usher in B.C.’s new political era.

Pundits have pontificated ad nauseum about all the reasons this deal was made. I think it’s because the party leaders and the MLAs in their caucuses know you are there and know what you are capable of when you work together. Many of Dogwood’s strongest, most active teams are in the ridings the new government won. Those MLAs know you will be there to support them doing the right thing, that you’ll show up to vote in the next election, and that you are prepared to take democracy into your own hands and leave them behind if they betray their promises.

That’s what five years of organizing and preparing for a citizen’s initiative campaign gets us. Imagine what five more years will achieve in B.C.!

This is an unprecedented opportunity for local leaders like you to set the agenda for our new government and ensure they follow through on their promises as soon as possible. Gathering signatures to petition the new government, then meeting with your MLA to show how much support there is in your community for stopping Kinder Morgan, banning big money and ending thermal coal exports are the most crucial actions you can take in the next few weeks. I am so proud of what we have done together and I can’t wait to see what our movement can do next.