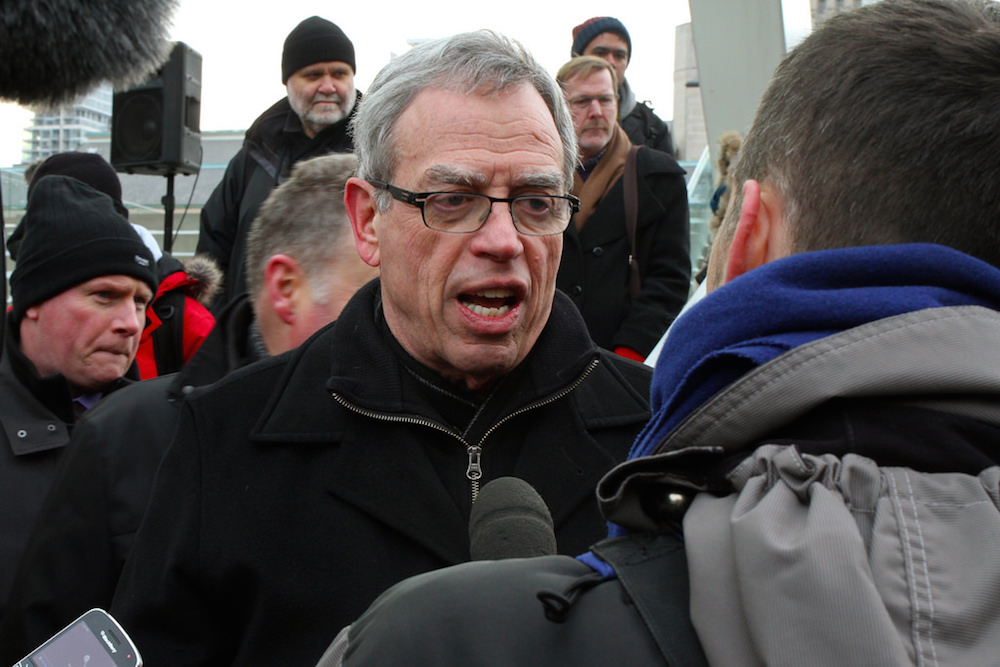 With Alison Redford gone and Joe Oliver shuffled off the pipeline file, the case is weakening for federal approval of the Northern Gateway proposal.

Redford was the Premier of Alberta. Oliver was the federal Minister of Natural Resources. Both were key spokespeople for the controversial project, which would involve twin pipelines from the Alberta oil sands all the way to the head of B.C.’s Douglas Channel, where Enbridge proposes to fill 220 supertankers a year with raw bitumen for sale to refineries in Asia.

With three months left to make a final decision, Stephen Harper’s inner circle is still considering the political pros and cons. This week’s events are a reminder: approval of the Northern Gateway pipeline is anything but inevitable.

The drama began on Tuesday with the resignation of federal finance minister Jim Flaherty. Rumors of his departure had swirled for months. Flaherty says he made his decision over Christmas. In any case, it’s highly unlikely Stephen Harper was caught by surprise.

With months to plan, Harper had his choice of ambitious, experienced ministers to serve as his #2. Instead Harper picked Joe Oliver, a rookie MP. Why?

Oliver is a former investment banker with Merrill Lynch, a company that took huge risks on U.S. subprime mortgages. He’s also a notorious climate change skeptic, prompting opposition leader Tom Mulcair to call his appointment to finance “an embarrassment”. But Harper probably likes the fact that Oliver is 73-years-old, with no apparent interest in party leadership. Most importantly, he was becoming a liability in his old job.

It was Oliver who penned a now-infamous open letter in January 2012, accusing Northern Gateway skeptics of something not too far from treason.

“Environmental and other radical groups,” the minister wrote, “threaten to hijack our regulatory system to achieve their radical ideological agenda.” This was in reaction to British Columbians signing up to participate in environmental review hearings set up by the government itself.

By October 2012, B.C. Premier Christy Clark was warning Oliver and his colleagues in stark terms against trying to push through Northern Gateway. “It would be a national political crisis,” she told the Globe and Mail. “Whether or not people supported the pipeline, they would band together to fight the federal government if they decided to intrude into British Columbia without our consent.”

Since then, Oliver has walked back from his support for Enbridge’s project – to the point of claiming that the federal government doesn’t support specific companies or proposals and merely exists as an objective, science-based decision-making body. Quite the one-eighty. Still, it would have been strange to watch Oliver announce cabinet’s rejection of Northern Gateway. Now he’ll never have to.

Oliver’s replacement at natural resources is Greg Rickford, who previously served as Minister of State for Science and Technology. Whereas Oliver came into politics from the predatory world of Bay Street investment banking, Rickford is a nurse who worked in remote First Nations communities.

Whether Rickford will usher in a new era, or merely offer a softer front for the same agenda, one thing’s for sure: he can thank Stephen Harper for the promotion and will faithfully carry out Harper’s game plan. It’s just not clear whether that plan still includes Northern Gateway.

Redford was, until yesterday, the latest leader in an unbroken 43-year dynasty of Progressive Conservatives in Alberta. Under Redford’s party, the Alberta government has become dependent on oil revenues for up to 40 per cent of its budget. That means more than any other province, Alberta is at the mercy of markets it does not control.

Redford’s government gambled that prices for heavy oil sands crude would stay high. They guessed wrong. When revenue began to fall short of their projections, Alberta slipped into deficit. Extreme flooding in 2013 cost the province even more. Redford’s fiscal solution was to call for more pipelines, so oil producers could ship crude out of her province even faster.

That’s what was behind her public feud with Clark. Redford needed to sell more oil to balance Alberta’s budget and save her political brand. It was always a Hail Mary. Now it’s too late.

The Alberta Progressive Conservatives have up to six months to pick a new leader. With only three months left on the clock for Northern Gateway, the power vacuum in Edmonton could last beyond the federal cabinet’s decision. Certainly, Redford’s party has more important things to focus on than a hypothetical pipeline.

Unlike most conservative first ministers, Redford’s chief political rival sat to her right, not her left. Danielle Smith and the opposition Wildrose Party are even more pro-oil than the Progressive Conservatives. But unlike Redford, Smith doesn’t count on Northern Gateway being built.

In a speech at the recent Manning Networking Conference in Ottawa, Smith named the two proposals she thinks have the best chances of approval: Enbridge’s Line 9 reversal in southern Ontario, and the Kinder Morgan pipeline and oil tanker project in Burnaby.

Smith is picking up on a political reality that’s sinking in for federal Conservatives right now in British Columbia: the backlash they’d face if they shove Northern Gateway through could cost them their majority government.

Never mind the ammo it would hand to opposition parties. More than 20,000 people have pledged to join First Nations in civil disobedience along the pipeline route if the project is approved. That’s twice the number of employees the RCMP has in British Columbia – and more than 20 times the number of people arrested in Toronto during the two-day G-20 summit in 2010.

That doesn’t make me glad, it makes me worried. It would be bad for tourism, productivity, interprovincial relations, investor confidence and safety. As Clark said, it would be a national political crisis. The worst part is, it’s all been predicted for years. If the Conservatives still go ahead and provoke that kind of chaos over a pipeline, their candidates will hear about it on British Columbians’ doorsteps all the way into the next federal election. Do they have the stomach for that?

With Joe Oliver and Alison Redford gone, Northern Gateway has lost two of its most vocal early supporters.

In the next 90 days, Enbridge has to build a new relationship from scratch with Greg Rickford. They have to pray the federal government can achieve reconciliation with First Nations. They have to hope Jim Prentice is worth the money. They have to fight five court challenges and meet 209 conditions imposed by the National Energy Board. Then, they have to meet Clark’s five conditions, including negotiating a “fair deal” for B.C. – except Enbridge executive Janet Holder says Clark’s government hasn’t even approached the company to haggle.

The clock is ticking. Enbridge’s loudest allies have gone silent or moved on. The company is still pouring money into the same old ads, but that’s starting to look less like a show of force and more like they’re running out of better ideas.

Three months is an eternity in politics – just look how much can change in two days. The decision on Northern Gateway
is anything but final.