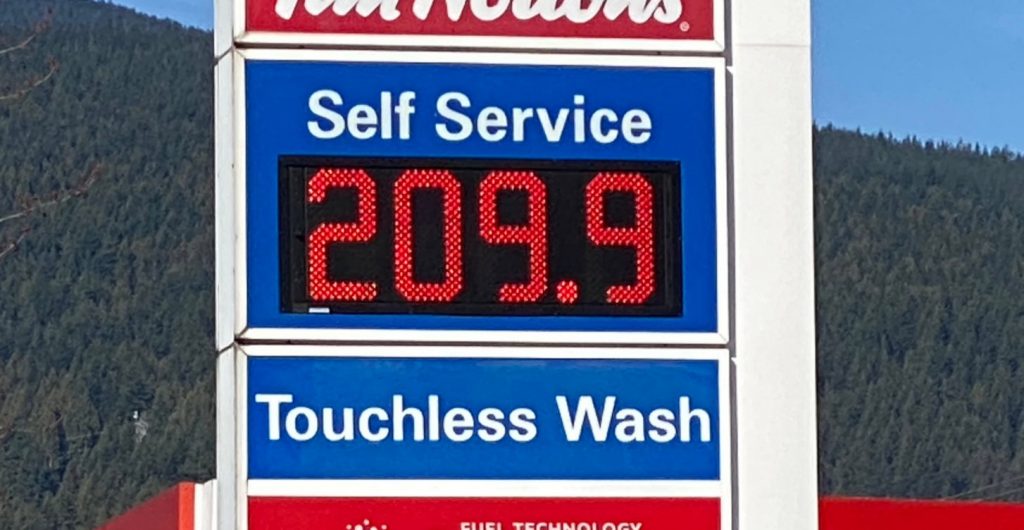 Oil companies love war. Not just because their products propel tanks and fighter jets. Missiles flying and people dying also means volatility in global oil markets, which is always a good excuse to jack up prices at the pump – and push more pipelines.

Now they have a war involving a major fossil fuel exporter, Russia, which is cut off from investors and customers as a result. That has oil and gas barons dancing a jig in competing petrostates like Saudi Arabia, Texas and Alberta.

Global companies like Shell, Chevron and Exxon are pulling billions out of Russia, eyeing more investments like the “LNG Canada” megaproject in Northern B.C. Even as scientists under bombardment in Kyiv beg us to phase out oil and gas, we’re being asked to cheer for more Canadian fossil fuels.

The truth is building more pipelines won’t stop Vladimir Putin. It won’t lower transport or home heating costs for your family. And it won’t make the world a safer place. It will only line the pockets of a different set of billionaires, and strengthen their grip on our politics as the world descends into climate chaos.

You hear it from Jason Kenney’s conservatives, Chrystia Freeland’s Liberals and both the BC Liberals and BC NDP: expanding Canadian oil and gas will bring relief to our allies in Europe, like sweet manna raining from heaven to water the roots of democracy.

It’s horseshit. Anyone who feels the stirrings of patriotic sentiment about Shell, Chevron or Exxon making money in Canada is simply being played. These corporations are vultures that will perch on any carcass with meat on its bones. Wrapping barrels of oil in maple syrup and Canadian flags doesn’t make them “ethical”. It never did.

The majority of Canadian oil and gas is owned by foreign companies. The same investors prop up dictators around the world. Here in Canada, pipeline companies use court injunctions and militarized police to remove Indigenous people from their own land. And for decades, all these corporations have knowingly made the climate catastrophe worse. It’s more than unethical – it’s criminal.

We’re told to boo and hiss at Putin’s “oligarchs,” a gang of corrupt billionaires that looted the Russian state and dominate its politics. That, I agree with. But we should save some rotten fruit for Canadian oligarchs like Murray Edwards, Galen Weston, Jimmy Pattison, the Irvings, Thomsons, Bronfmans and Rogers clan, and the list goes on.

Vacuuming money out of your pocket

For generations these dynasties have stripped working-class Canadians of their paycheques, selling us essentials like groceries, cars and phone plans at inflated prices. This upward transfer of wealth accelerated during COVID-19, as billionaires vacuumed money out of both the government and workers stuck at home.

Now it’s the oil companies’ turn. In Canada many are vertically integrated, meaning that Shell, Husky, Suncor, Imperial, Irving and others extract the oil, refine the oil and sell you gasoline. With the world’s second-largest reserves of crude oil, you might think that would translate to savings for Canadian motorists. You’d be wrong.

Gas retailers behave like a cartel. That’s not an exaggeration – they’ve been caught colluding to fix prices at whatever they think the market will bear. Sure, the price of gas includes taxes and the global price of crude oil. But a big chunk of it is profit, and every penny they can tack on at the pump translates to millions more in cash for them, at our expense.

Those same companies, and their political puppets, are now using the war to push for more pipelines. Not to give Canadian families relief on their fuel bills. No, these are all oil and gas export schemes to boost corporate profits.

Only one way to beat the system

Without organized resistance from their own citizens, the trajectory of the world’s oil-soaked military powers seems clear. More wars, more pipelines, more pandemics and economic spasms until wildfires or waves swallow us all. But it doesn’t have to go that way.

Protestors in Russia are risking brutal reprisals to condemn Putin’s outrageous invasion of Ukraine. Ordinary people in this country can also reject military escalation, and opportunistic calls to expand the oil and gas industry in response to war.

At the end of the day the only way to weaken the warlords, loosen the grip of oligarchs and save the planet is to stop burning oil and gas.

Our governments are not helping. They’ve blown billions of public dollars on fracking subsidies and new pipelines. They’ve been cowards, frankly, when it comes to regulating big polluters. And they’ve been far too slow to invest in the infrastructure we need – mass transit, renewable energy, affordable neighbourhoods – that make it possible to imagine life without fossil fuels.

Some people are going it alone, taking the financial hit up front to install an electric heat pump or switch to electric bikes and cars. If gas prices stay high, which seems likely, more families will do the math and find ways to cut their demand for oil and gas. But voluntary consumption changes by individuals can only go so far.

We need lawmakers, and the public treasury, to launch a fossil-free “jobs and hope” plan big enough to counter the dark death spiral offered by the oligarchs. We need all our collective power to imagine a better, healthier society – and force politicians to start putting the pieces in place.

As always, that means organizing where we live, in solidarity with people all across the world who want peace, safety, dignity and the hope of a livable future.