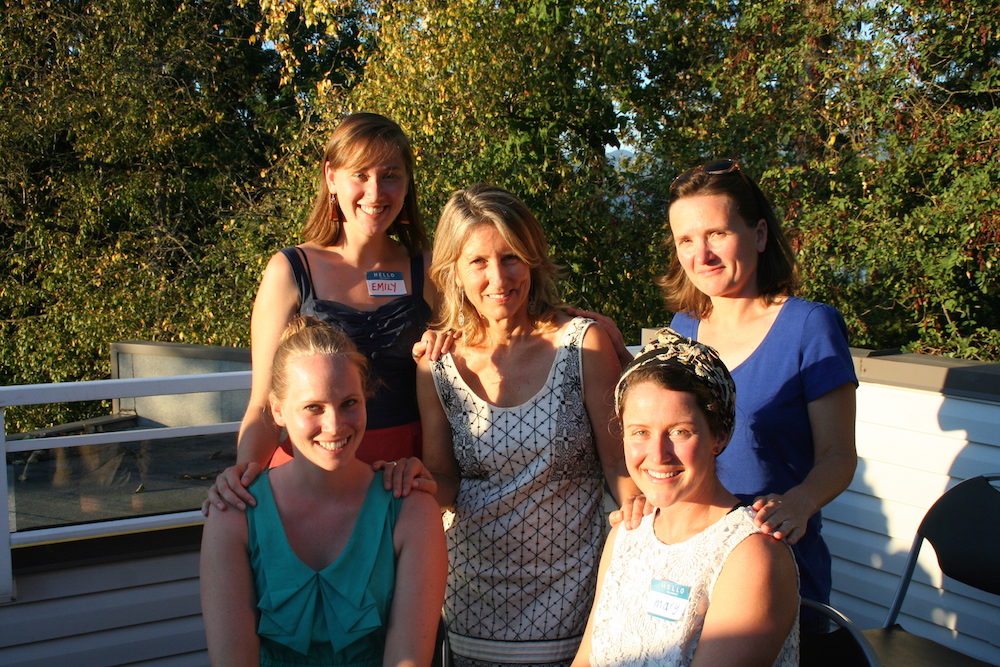 She’s not your ‘Climate Barbie’

Do not let sexism weaken us. If we want to beat Big Oil, we need to come together.

Here is a reply to one of Dogwood’s tweets from yesterday: 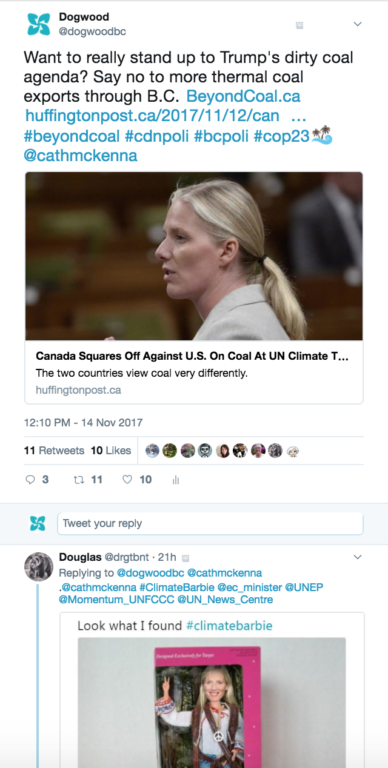 At Dogwood we try to focus on the issues. And while we differ with some female politicians on their policies, that’s where it ends. At policies.

We disagree with many of Minister McKenna’s decisions. But attacking her because she looks a certain way is not just inconsequential and an impotent excuse for an argument, it’s just plain wrong.

Likewise, calling out the premier for taking donations that possibly led to favours is fair game for any citizen. Unfortunately, when that premier is a woman, the comments lend themselves to unfavourable comparisons. Here’s just a small sample of the sexist vitriol we had to delete from our Facebook wall in the lead up to the last election: 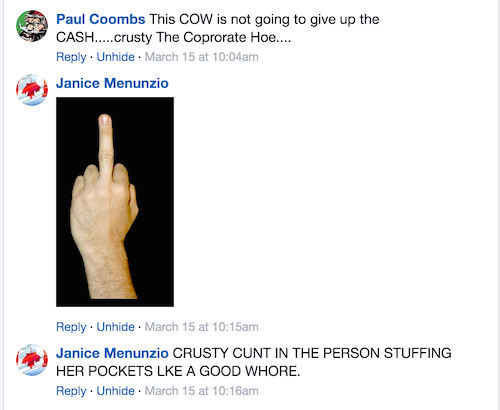 As more women enter politics and governments try to uphold gender parity in their cabinets, female politicians are in the spotlight more than ever before. Yes, all politicians are subject to immense scrutiny and (often undeserved) ridicule. But female politicians get their own flavour of criticism. Nobody referred to Bruce Hyer as a “dog” or a “bitch” when he crossed the floor. In John Horgan’s first press conference as premier, he wasn’t asked about his outfit choice. And I’ve never heard of “Climate Ken.”

It’s not just politicians. When I tweeted a picture of my dog and me standing up against Kinder Morgan, I became a target for trolling by an anonymous account called @EnviroWatcher. He not only relentlessly trolled me on Twitter, but created a Facebook page and posted stories about me he found on the internet.

Because the troll never explicitly threatened me with violence, Twitter and Facebook would not intervene. While he never said he was going to hurt me, he posted photos of me and information about where I worked and where I lived. As a young woman, I felt threatened.

But while it scared me, it didn’t scare me off. I still wake up everyday to publicly raise my voice against Kinder Morgan and for my home, regardless of whether or not I face additional hurdles to do so simply because of my gender.

I’m not the only one. Andrea Harden-Donahue shared her experience with misogyny in the climate movement in the National Observer this week. Here is a quote from the article:

“There were messages that called for my beheading and for a bat to be taken to my face.”

Andrea Harden-Donahue had posted a photo of her organization celebrating the cancellation of Energy East. Canada’s Energy Citizens reposted it and then facilitated violent language against Ms. Harden-Donahue. Canada’s Energy Citizens is a campaign belonging to the Canadian Association of Petroleum Producers, a national oil industry lobby group. Fortunately, while Ms. Harden-Donahue faced explicit threats of violence for standing up in the public sphere, she won’t let it deter her from her important work.

It is unfortunately unsurprising to me that this level of misogyny exists in the pro-pipeline movement. The problem of violence against women, particularly Indigenous women, in resource extraction sites is so prevalent, Amnesty International did a study about it.

While misogyny is a part of the culture of the pro-pipeline movement, I don’t want to see it take over ours. We are up against a lot of big challenges — multi-billion dollar corporations, climate change, powerful pro-pipeline politicians — and using hateful names, like calling McKenna ‘Climate Barbie’ or calling Christy Clark the ‘C’ word, will only divide us and make us weaker. Just think about how much more effective our movement would be if women — queer women, immigrant women, Indigenous women, all women — didn’t have to deal with this garbage on a daily basis.

I am deeply sorry for the insults that come from commenters on our Facebook page. I’m sorry we live in this world with people who think this is an acceptable way to treat women, even women who are leaders in our society. And I’m sorry my brilliant colleagues who manage Dogwood’s social media accounts, all of whom are young women, have to spend an inordinate amount of time moderating these comments. I hope repeatedly removing the ‘C’ word from our Facebook page does not deter them from continuing to raise their voice. Because frankly, the world is a better place because of their hard work.

I studied the human rights of women in my graduate degree. Every day I read 15 to 20 legal cases about horrific things that were done to women, because they were women. My best friend asked me how I could continue to study all these awful stories and still remain driven and optimistic about the world. Honestly, it was within the stories themselves I found hope. Every one of them featured a strong woman who was raising her voice, or inspiring others to stand up. Because women are speaking out, our society is taking steps forward.

And Dogwood is no exception. 12 of my 23 colleagues are brilliant, bad-ass women. We have a norm of gender equality on our executive team, featuring shero directors Alisha Brown and Laura Benson, and we currently have an all-female board of directors.

And finally, Dogwood’s strength lies with all of our volunteers, especially the dedicated women who are leading the movement to reclaim decision-making in this province. They are the heart and soul of our organization. Terry in Courtenay, Jane in Victoria, Maddie in Vancouver, Kathryn in Victoria, our Raging Granny allies — none of these women should be underestimated. They, along with other women all over the world, are actively shaping the future of this planet.

When asked about women in the climate movement, here is what our volunteer outreach coordinator from Dogwood’s UVic team, Cristina Eva, had to say:

“Each day I have to fight three battles — climate change, being objectified and the colonial discourses that push against my settler responsibilities. The relationship between humankind and nature requires mutual respect and care. Feeling this responsibility and love for the environment is what gives me strength to stand against hurtful stereotypes such as ‘Climate Barbie’.

“We live in a world where women are often battling negative stereotypes and oppression, similar to the environment. Yet I find the environmental movement empowering. All of these reasons, and more, are why I am part of Dogwood.”

So here’s a message for CAPP, Canada’s Energy Citizens, and every other proponent of violence against women and misogyny: we aren’t going away. Like the women before us, we are going to continue to raise our voices and stand up for our province, our country and our planet. And if you are against Kinder Morgan and want to win, you better get on board.

Don’t underestimate the women pushing back against injustice. From human rights to the climate movement, we’ve been doing it a long time. And we are getting pretty damn good at it.

43 Responses to “She’s not your ‘Climate Barbie’”