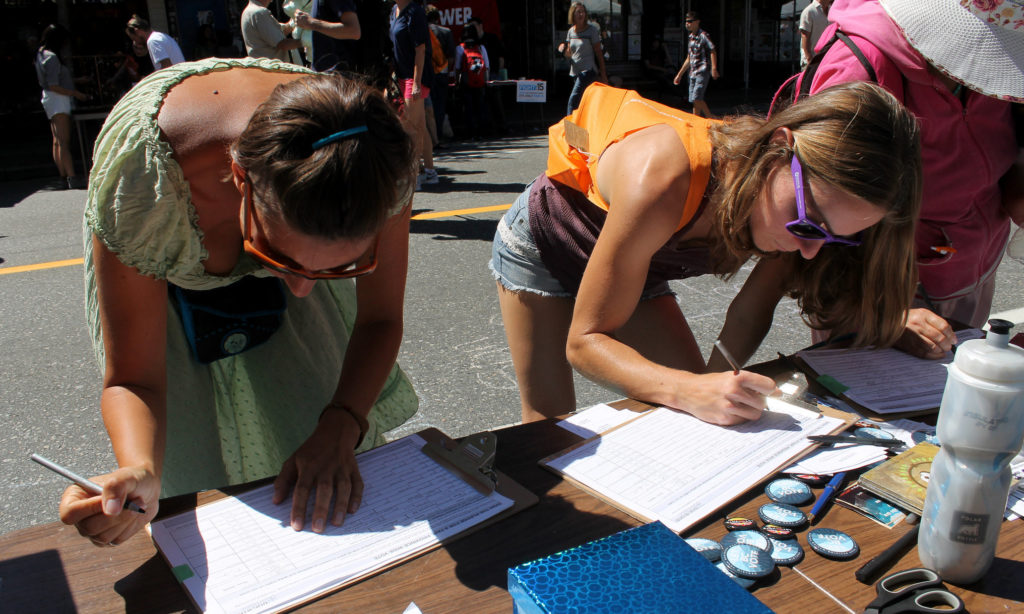 What exactly is the plan I’m being asked to support?

Dogwood is planning a two-step process to prepare for a potential citizen’s initiative to give British Columbians decision-making power over crude oil tanker and pipeline projects in our province.

If 8,481 British Columbians organize their friends, family and neighbours to stop an increase in crude oil tanker traffic on our coast, we can pressure Premier Clark to stand up for B.C and block these projects. If she betrays her promise, together we will be ready to reach the hundreds of thousands of voters it would take to win a citizen’s initiative.

The first step is to launch the largest organizing campaign in B.C. history to train and engage organizers in all 85 B.C. ridings, and get hundreds of thousands of British Columbians – exceeding the threshold necessary to win – to pledge to support a citizen’s initiative if necessary.

We would only move on to the second step of launching an official citizen’s initiative if:

At that point, a citizen’s initiative may be British Columbia’s best tool to stop increases in crude oil tanker traffic that put our coast and economy at risk.

Is Dogwood planning to run this campaign?

No, not alone. In the building phase, multiple interested groups (including Dogwood) will reach out to their own supporters and encourage them to canvass or at least pledge to sign a citizen’s initiative if necessary.

Later this spring, any interested groups would create a partnership and form a new entity/organization that would collaboratively guide a coordinated campaign.

If Prime Minister Harper’s cabinet approves a project and Premier Clark doesn’t stand up for B.C., the new entity partners would decide whether they are prepared to launch and win an official citizen’s initiative.

The name, membership and governance structure of this group would be decided later by the organizations involved.

How does the citizen’s initiative process work?

A successful citizen’s initiative needs to collect signatures from 10 per cent of all eligible voters in each of B.C.’s 85 provincial ridings during a 90-day period. After verifying the signatures and confirming the necessary thresholds have been achieved, Elections BC would send the matter to a standing committee of the legislature, which would choose one of two options:

Is an initiative vote binding on government?

Legally, no. But politically it would be difficult to refute.

While legally the house could reject the legislation, politically this would be almost impossible. The government would face enormous backlash if they betrayed the will of a majority of voters. The threat of this backlash would also make amendments to water down the legislation very unlikely.

What is the difference between an initiative vote and a referendum?

A referendum is a province-wide vote on a question that government asks of citizens. Referenda are administered under the Referendum Act.

There is no way for citizens to directly force a referendum, but it is possible that the legislation in a citizen’s initiative could require a referendum before certain permits could be granted to oil tanker and pipeline projects.

Is this strategy risky?

Risk should always be evaluated in context. It would be foolish and risky to not prepare for the possibility that Ottawa will push oil tanker projects forward and Premier Clark won’t stand in the way. A massive increase in the risk of an oil spill on our coast is unacceptable to most British Columbians.

This situation is risky regardless of the strategy we employ, so it seems wise to be ready for every scenario. Pursuing an initiative strategy may be a huge endeavor, but being unprepared if our elected representatives bow to Big Oil’s interests is arguably riskier. Our coast and our economy wouldn’t survive a massive oil spill – we should prepare every possible defense to protect what we hold dear.

What if we lose?

Remember that we would only launch the official citizen’s initiative if Prime Minster Harper and Premier Clark approve increases in crude oil tanker traffic after we have organized enough support to be able to win.

If Ottawa and Victoria sell B.C. out to Big Oil, there are three ways for British Columbians to stop expansion of crude oil tanker traffic:

Organizing political power through the citizen’s initiative process does not preclude or interfere with other options. In fact, properly deployed it could enhance them whether or not an initiative is ultimately successful.

For example, if 400,000 people supported an initiative but we couldn’t reach the required 10 per cent threshold in a few ridings, then the initiative would fail. However, the organized network of hundreds of thousands of supporters concerned about unpopular oil tanker and pipeline projects could change the political landscape. The 400,000 vocal supporters would not negatively affect the judges considering First Nation or other lawsuits, nor would it interfere with efforts to engage people in civil disobedience.

Shouldn’t we focus on the 2015 federal election?

The organizing network we build in key ridings could work for both the preparatory initiative campaign and the federal election.

People will likely be more excited about working on a direct democracy campaign in the next six months than building toward the federal election 18 months in advance.

Whereas electoral organizing splits our supporters two or three ways along partisan lines, British Columbians of all political stripes are passionate about protecting our coast.

How would a citizen’s initiative impact aboriginal rights and title?

The legislation proposed in a citizen’s initiative would probably be focused on limiting the B.C. government’s’ ability to approve the 60 provincial regulatory permits required for crude oil tanker and pipeline projects to be built. It could require special procedures for the granting of these permits in specific geographical zones. This would not affect aboriginal rights or title as the government’s duty to consult would remain.

How would this campaign impact First Nations’ legal challenges?

A citizen’s initiative campaign and First Nation’s legal challenges would operate on parallel tracks. A citizen’s in
itiative campaign would have no direct legal impact on First Nations legal challenges, but prior cases have shown that Canadian courts may be influenced by populist sentiments. In that context, having an organized, visible movement of British Columbians who support First Nations rights would not hurt, and may in fact help in the courts.

A citizen’s initiative campaign will also create a larger pool of potential people who could be called upon to help fund First Nations litigation.

Would there be a “No” side?

Yes. Initiative opponents would have to register with Elections BC, at which point a set of fairly restrictive rules comes into force, including strict spending limits.

A company like Enbridge could officially become a party in the “No” side, or create a front group, or register as a third party advertiser. Whichever course they took, spending limits would greatly decrease their ability to advertise as they currently do.

Will our opponents be able to outspend and out-advertise us?

Perhaps, but an official citizen’s initiative campaign would actually create a much more level financial playing field. There would be a cap on opponent and proponent funding mandated and enforced by strict laws.

The spending cap will be less than one million dollars for all expenses including all TV, radio and print advertising for each side. That may sound like a lot of money, but it is a fraction of what Enbridge, CAPP and others are currently spending. In addition, non-registered opponents would be limited to only $5,000 in advertising.