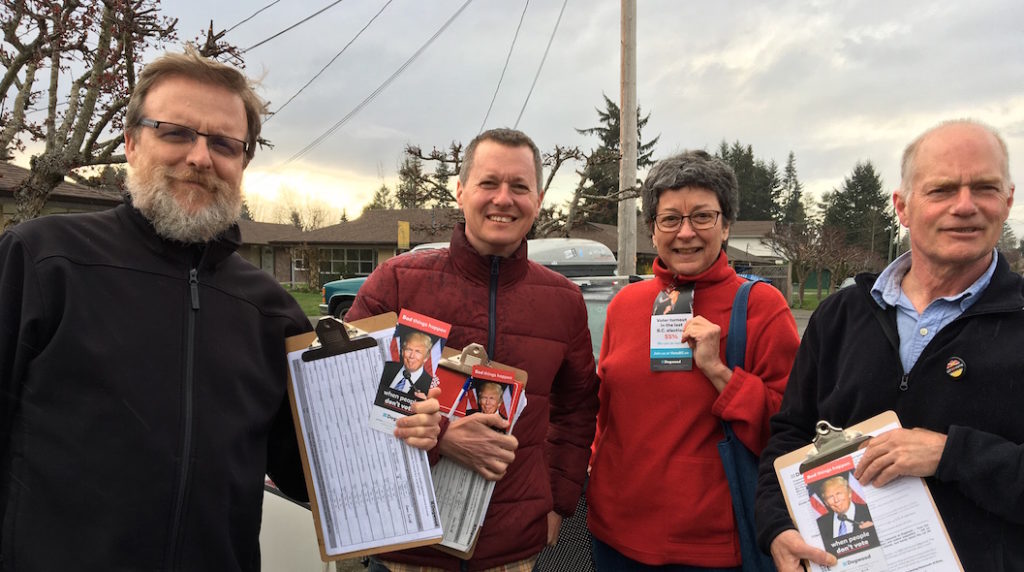 I can’t explain why, but over the past couple of weeks I had this feeling in the pit of my stomach that this election was going to come down to the place where I have spent most of my time organizing with Dogwood — Courtenay-Comox.

Because I care so deeply about the future of our province, because I wasn’t sure if our effort was going to be enough, and because the fatigue had set in after a long campaign, at 8 o’clock on election night when the polls closed, I did something I hardly ever do . I powered down.

I shut off my phone and put away my laptop. I took the dog out for a long walk. I opened a bottle of beer and sat down to watch ‘Occupied’ on Netflix. And then I went to bed.

For awhile sleep remained elusive. I reflected on our team’s effort: I knew they put in the hours on the doorsteps talking about issues and signing up new voters. I knew we made the calls.  Eventually I settled on this: we did the best we could with the resources we had. And once I’d reached that conclusion,  I drifted off to sleep.

When the alarm woke me out of a deep sleep at 6:30 a.m., I quickly realized this was not going to be just another day in the ‘wild west’ of B.C. politics.

As it turned out, only nine Courtenay-Comox votes — quite possibly from the very people we spoke with on those door steps, and almost certainly from some of those first-time voters we signed-up — currently make up the difference between another Christy Clark Big Money majority and the chance for a fresh start in B.C. politics. Our team worked day in and day out under the assumption that every vote was going to count. And it did. Big Time.

Moving forward, politics in B.C. will never be the same again.

Put another way, yesterday was day one on the path to political reform that once and for all will banish the scourge of big money in our elections.Kinder Morgan’s pipeline is now officially on death watch. And perhaps, with a little cooperation, we can put the talk of “strategic voting” behind us and start discussing how to build the democracy that best reflects our society.

In the meantime, as the dust settles, my advice for the rest of us? Hang tight. Rest up, gather your people, stay organized. That’s what my team in Courtenay will be doing — preparing for the hard work ahead of holding our new MLA and new government to account, whoever it might eventually be.