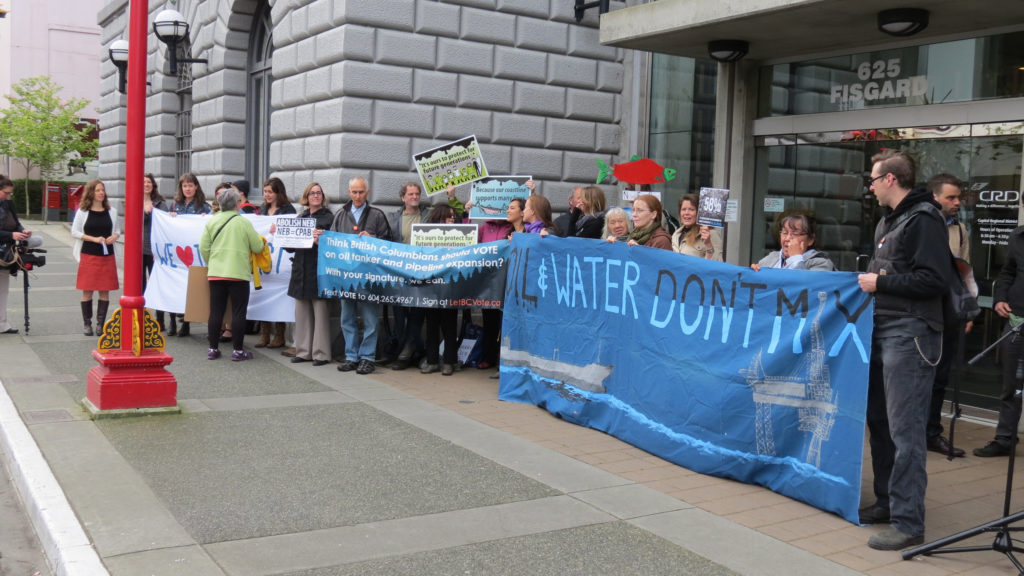 VICTORIA – Citizen groups representing more than 300,000 concerned British Columbians emerged from a closed-door meeting with National Energy Board (NEB) Chair and CEO Peter Watson unconvinced that the pipeline regulator has the power to conduct fair or meaningful reviews of crude oil infrastructure in the province.

Staff from Sierra Club BC, Georgia Strait Alliance, Dogwood Initiative, ForestEthics Advocacy, Canadian Parks and Wilderness Society and West Coast Environmental Law expressed their concern to Watson, who has led the NEB since June 2014, that the board’s ongoing review of Kinder Morgan’s TransMountain expansion proposal is so flawed as to discredit the eventual result in the eyes of the public.

“The NEB is on a cross-Canada tour to hear from Canadians about pipeline spills and safety yet they are only in B.C. for a week and local residents were shut out of today’s meeting with mayors of the capital region,” said Caitlyn Vernon, Sierra Club BC campaigns director. “If the NEB really wanted to hear from British Columbians, why didn’t they design a process where our voices could be heard? That’s why the B.C. government needs to step in and create a review that includes local voices, respects municipalities and First Nations, and considers the full impacts of Kinder Morgan’s proposal – especially its contribution to climate change.”

The groups are calling on Premier Christy Clark to withdraw from a 2010 equivalency agreement that signed away power over pipeline reviews to Ottawa. It’s a position echoed by the Union of BC Municipalities, the Association of Vancouver Island and Coastal Communities, both opposition parties in the provincial legislature and Coastal First Nations in a lawsuit filed in January. The B.C. government can cancel the agreement with the NEB at any time.

Senior staff from the NEB and Canadian Coast Guard are on a ‘public engagement’ tour to discuss oil spill safety and regulatory issues. Between 2012 and 2014 the federal government moved to streamline oil pipeline reviews, removing public hearings and oral cross-examination and handing veto power over NEB decisions to cabinet. The federal government has also cut marine safety budgets by 27 per cent since 2009.

“The bunker fuel spill in the Vancouver Harbour this month showed us just how prepared the feds are to deal with accidents involving oil tankers,” said Kai Nagata, Energy & Democracy Director at Dogwood Initiative. “That was 17 barrels of oil. An Aframax tanker can carry 800,000 barrels of diluted bitumen, which sinks in water. It’s good to hear that the NEB and Coast Guard want to engage with the public, but actions speak louder than words.”

Citizens locked out of the NEB meeting formed a welcoming committee this morning on Fisgard Street in Victoria B.C. https://www.flickr.com/photos/dogwoodinitiative/sets/72157651828339670/