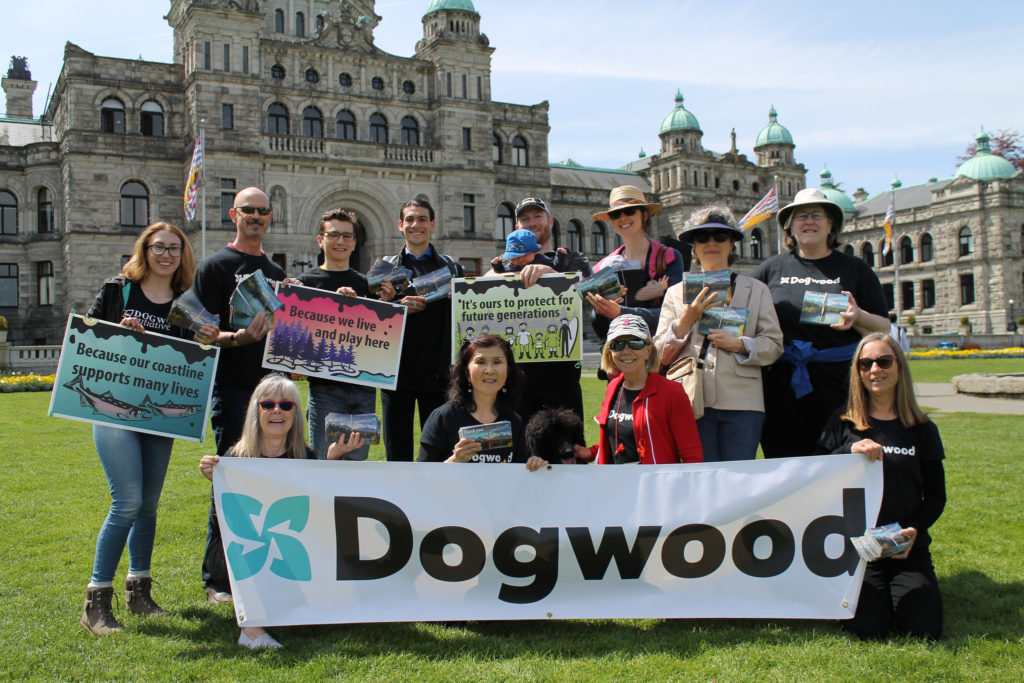 Over the last two months Dogwood supporters have sent 20,800 personal messages to our governments asking B.C.’s premier to stand strong, supporting better provincial protections against oil spills, and warning federal MPs not to use Canadians’ tax dollars to bail out a Texas oil company. Plus hundreds of us showed up in solidarity with Indigenous leaders on March 10 to witness Kwekwecnewtxw: Protect the Inlet.

Back at the end of February, the No Tankers campaign was — relatively speaking — a bit quiet. Kwekwecnewtxw: Protect the Inlet was on the horizon, the Alberta-B.C. wine war had died down and Kinder Morgan seemed to be inching its way towards construction season. The B.C. government had promised to propose new oil spill regulations and decided to pre-emptively go to the courts to prove the province has the jurisdiction to restrict bitumen shipments. It looked like we needed a big push to strengthen the B.C. government’s resolve against Kinder Morgan.

We decided to do all we could to support Indigenous leadership and power up grassroots support for provincial oil regulations. We mobilized Dogwood supporters to Burnaby on March 10 to stand with Indigenous leaders and thousands of other Kinder Morgan opponents. 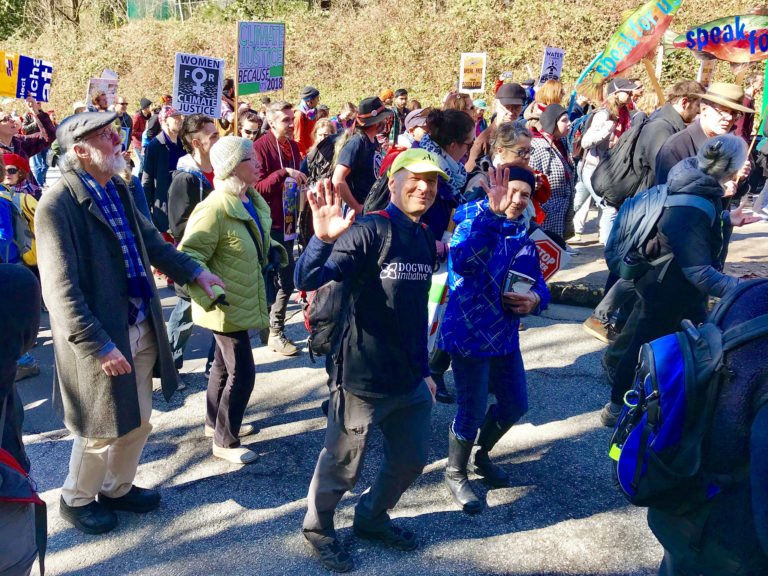 A small snapshot of the march at Kwekwecnewtxw: Protect the Inlet

We also printed up some special cards and Dogwood volunteers took them out into their communities asking people to pledge that they would do their civic duty and submit a comment on B.C.’s oil spill regulations when the time came. It was fairly wonky and theoretical when we started. Then a bunch of huge, unexpected things happened.

The wind in our sails — but rough waters ahead

First, the B.C. government surprised us by posting their proposed oil spill regulations with a public comment period ending on April 30. Dogwood volunteers were hitting their groove collecting pledge card from friends and neighbours, so we figured we’d make a big push for comments later in April. 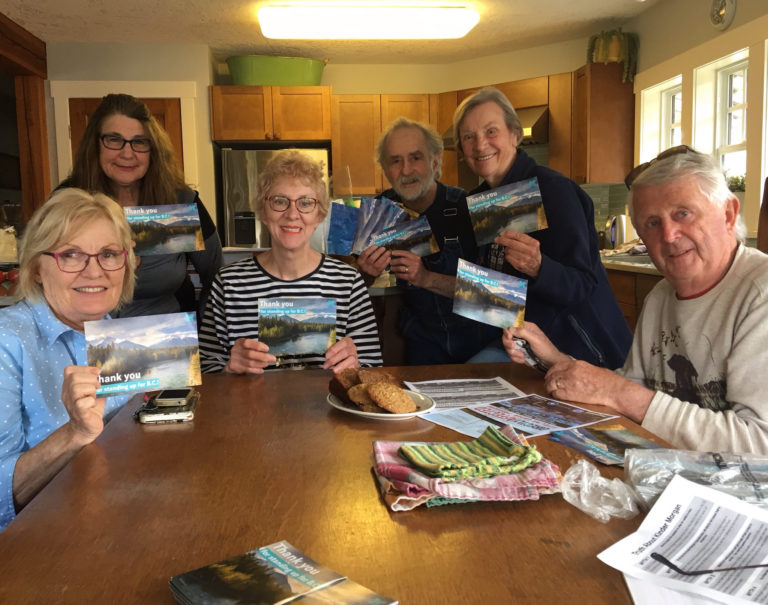 The Dogwood volunteer team in Parksville with a healthy stack of pledge cards (and cookies!)

Then on April 8, Kinder Morgan announced it was suspending all “non-essential” work and spending on their project and might pull the plug if they couldn’t achieve “certainty” from stakeholders by May 31. It was an unprecedented admission of weakness by the Texas oil company, but the No Tankers team was not able to celebrate for long.

Kinder Morgan tried to scapegoat the B.C. government, and the federal Liberals and Alberta government took the bait. Our provincial government calmly remained committed to asking the B.C. Court of Appeals whether B.C. can regulate bitumen transport through our province (they submitted the “reference case” on April 26), while the Alberta government passed legislation to supposedly give it the ability to restrict the sale of oil to B.C. And the federal government fell over itself to declare it would use public money to ensure the pipeline and tanker project gets built. They haven’t backed off that offer even though Kinder Morgan’s CEO suggested a week later that even public investment could not create the certainty they want for the project.

This political circus dominated the headlines for nearly two weeks — and galvanized Dogwood supporters. We quickly launched a “Stop the Texas tanker bailout” action that allows anyone to send an email directly to key MPs’ parliamentary BlackBerry phones. Alongside allied groups, tens of thousands of people bombarded our federal representatives with their personal messages in the days and weeks following.

It’s not over yet…

Shamefully, the whole debate seemed to purposely ignore the fact that Indigenous communities also have constitutionally-recognized jurisdiction over the lands in question, and the Tsleil Waututh, Squamish, Sto:lo, Upper Nicola, Coldwater and Tk’emlups te Secwepemc Nations’ legal challenges to the project’s approvals are still awaiting a ruling.

In April, the National Observer revealed that the Liberal government had already made up its mind to approve Kinder Morgan before completing consultation with First Nations, which does not bode well for the federal government’s case and the company’s chances. Even if the rulings went in Kinder Morgan’s favour, they may not come down before May 31 — and either way, could still be appealed.

And, of course, Indigenous land defense in Burnaby has continued with support from faith leaders, local residents and even two federal MPs, with more actions planned through the spring and summer in territories all along the pipeline route.

Dogwood organizing for the win

Despite the fact that these emotionally charged and rapidly shifting intergovernmental disputes took over public attention, Dogwood volunteers continued their push for democratic engagement in B.C.’s oil spill regulations. Between March and April, our volunteers signed up 3,308 people to submit comments. In April, thirty volunteers at fifteen phonebanks — and thirteen dedicated texters — contacted thousands of supporters to ask them to submit comments. By the deadline on April 30, 4,189 Dogwood supporters had submitted original, personal comments to the B.C. Environment Ministry for a process that most people had never heard about until someone from Dogwood got in touch. 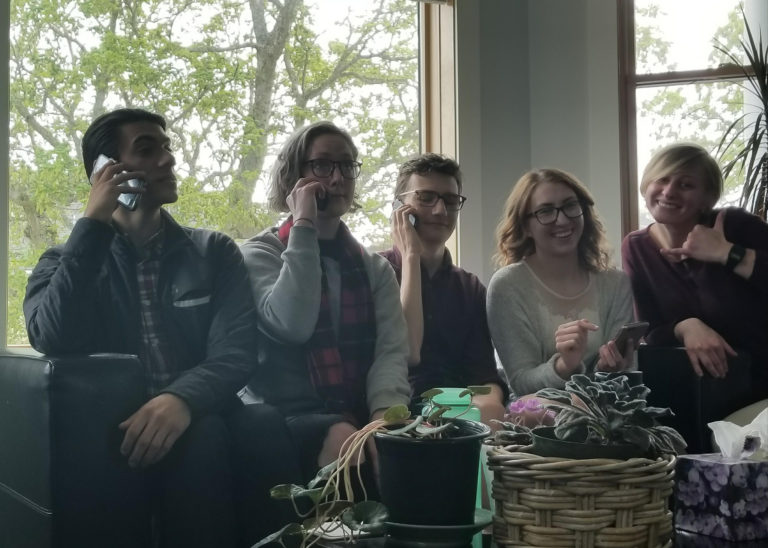 Thanks to our savvy and nimble campaign team, our dedicated and hard-working volunteers, the support of thousands of individual Dogwood donors and the ongoing commitment of British Columbians from all walks of life, the past few months have been some of the most exciting and most successful days in the fight to stop Kinder Morgan. With the clock ticking on the company’s self-imposed deadline, there are more exciting weeks ahead.

What’s next? As we await rulings on First Nations’ court cases, this month we’ll be doubling down to increase the pressure on our federal government to stop the bailout.

Join us to spread the word in your community and send our message straight to Ottawa!

5 Responses to “One step closer to stopping Kinder Morgan”