The Massey Bridge: A boondoggle bought by big money?

Why did the BC Liberals prioritize a project that could harm local communities, the Fraser River and farmland?

On the 601 bus to my hometown of Tsawwassen, I watch as bulldozers uproot the evergreens adjacent to the farmland along Highway 99, making way for a costly ten lane bridge built in the interests of industry. I imagine dredgers forcing themselves on the river bed, scraping at the sediment and defiling the critical salmon habitat.

The colossal pet project of the BC Liberal party — the controversial $3.5 billion Massey Bridge forced upon unwilling municipalities — is just another reason why we need a corruption inquiry in B.C.

Why was this $3.5 billion project, which impacts the health of my family and my neighbours while bulldozing food producing farmland, so important to the BC Liberals? Massive donations from proponents and prospective contractors to their party could hold the answer.

While our new NDP government suggests we defer to the mayors of affected communities on the fate of this bridge — which would yield a resounding no — construction on the Massey tunnel replacement project has already begun. For residents of Delta and Richmond, it is an unwelcome hangover from the BC Liberal reign.

Experts question the usefulness and safety of this project. How is it meant to relieve congestion when it includes minimal plans for public transit? I shudder at the fact the municipalities and citizens affected asked for a comprehensive environmental review under the Canadian Environmental Assessment Act (CEAA), but the Trudeau government denied the request. Apparently residents south of the Fraser don’t deserve to know about the impacts a massive bridge would have on their health and safety.

And while those who make their home in Delta, like my family, face unknown risks from increased coal barges and LNG tankers, many companies will benefit from the removal of the Massey Tunnel.

Making room for tankers on the Fraser River

Unlike the tunnel, a new bridge would make room to dredge the Fraser River, allowing for larger ships to reach ports upriver and spur on further development for private gain.

Fraser Surrey Docks, the company still hoping to build a thermal coal export terminal on the Fraser River, would certainly benefit from a bridge. Maybe that is why they gave $14,575 to the provincial Liberal party while they were in control of the decision. They also lobbied the feds to have the tunnel removed so they can move full ocean-going vessels of coal down the river, past residential neighbourhoods, over fish habitat, and out to sea.

Another company with a massive stake in this bridge is Fraser River Pile and Dredge, who donated $24,876 to the BC Liberals. When the river needs to be dredged for the construction of the bridge after the tunnel is removed, this is the company for the job. They are the largest dredging company in the country and are already contracted by the Port of Vancouver to routinely clear out the Fraser.

FortisBC is looking to expand their fracked gas operations at the Tilbury LNG facility and bring more tankers up the Fraser. The removal of the tunnel would allow for larger, fuller supertankers to reach their facilities. They donated $186,024 to the BC Liberals and will spend $400 million on their expansion project in Delta.

In October 2016, the shortlist for contractors to design and build the Massey Bridge was released, revealing Gateway Mobility Solutions, Lower Mainland Connectors and Pacific Skyway Partners as the lucky bidders: 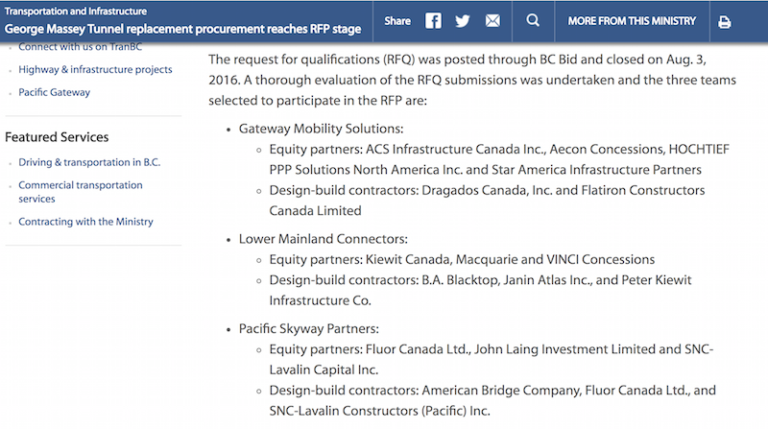 Together, the Lower Mainland Connectors group donated $200,895 to the BC Liberals. $111,675 of this came from Kiewit Contractors, which is headquartered in Nebraska and is one of the largest private contractors in the world. BA Blacktop, one of the design-build contractors for this team of bidders, also donated $72,170.

It should be noted that this contractor group also includes the Macquarie Group, the Australian company that owns Fraser Surrey Docks. Macquarie donated $17,050 to the Liberals to try to secure all of their interests.

The final contender for the contracts, Pacific Skyway Partners, includes SNC-Lavalin, a company that has been banned from applying for World Bank contracts and involved in corruption scandals in Quebec. They also conducted the ludicrous environmental study of the Fraser Surrey Docks coal transshipment project deemed entirely inadequate by health care providers and municipalities. This occurred after SNC-Lavalin bought a 23 per cent share in AltaLink, an electricity transmission company from Macquarie Essential Assets Partnership — a member of the Macquarie Group, again owners of Fraser Surrey Docks.

SNC-Lavalin has donated $27,647 to the BC Liberals. Their former board chairman, Gwyn Morgan, has personally donated more than $245,500. His wife, Patricia Trottier, donated $15,000 to the party. Morgan is also the founder of the oil and gas company EnCana, a company that has donated $1,243,751 to the BC Liberals. Further, Morgan was a key advisor and confidant of Christy Clark.

All this begs an important question: Is the new Massey bridge really in the interest of commuters, or industry insiders with massive pocket books and a cheque with the BC Liberals’ name on it?

For too long, it has looked like Big Money has bought political favours in this province. We need to know for certain if decisions, like building the Massey Bridge, were made under the influence of political donations. If approvals were granted to favour donors at the detriment of British Columbians’ health and safety, they need to be sent back to the drawing board and reassessed.

There is a way to develop a good transit plan without jeopardizing the safety of local communities, the health of the Fraser River and the animals that rely on it, all while protecting local farmland. No one denies the need for a new crossing of the Fraser, but there are certainly alternatives to a $3.5 billion dollar bridge wrapped in a bow for industry that taxpayers will be forced to pay for. Even certain Longshoremen have suggested that there are other options to ease congestion without removing the tunnel.

Big Money has secured its interests over those of British Columbians for long enough. Our government not only needs to act on their promise to ban Big Money fast — they need to begin a corruption inquiry to dredge up the facts and stop these harmful projects before it’s too late.

12 Responses to “The Massey Bridge: A boondoggle bought by big money?”