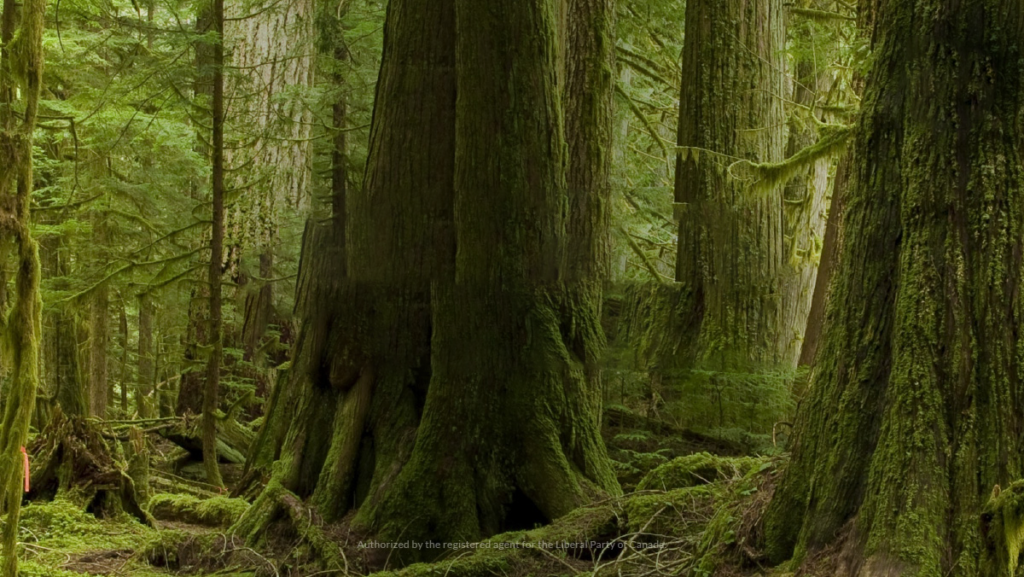 Liberals move to outflank the NDP on green issues

When Justin Trudeau was asked by a reporter why he dodged Indigenous youth who traveled from Fairy Creek to one of his photo ops, the Liberal leader didn’t answer the question.

“We recognize there’s a real issue here locally around old growth forests, and decisions made by the BC NDP government,” said Trudeau, the corners of his mouth creeping up in a smile – or maybe a smirk.

“It would be interesting to ask Jagmeet Singh, a B.C. member of parliament and an NDP, uh, leader, what his perspective is on old growth forests and decisions that the Horgan government have made.”

On clearcuts, coal exports, even oil and gas, the Liberals see an opportunity to brand Trudeau as an environmental champion. And despite his record in government, polls suggest the message is getting through.

Where are the Greens and NDP?

The Liberal war room strategists are no fools. They know the Green Party is broke and disorganized after a painful battle between leader Annamie Paul and the party executive.

Unless voting intentions shift dramatically, Elizabeth May and Paul Manly look like the only Green MPs headed back to Ottawa – and even Manly’s Nanaimo seat could be a tough three-way race.

The John Horgan wing of the party has overseen the arrests of more than 800 forest defenders since May, with Indigenous and Black activists targeted for especially brutal treatment by the RCMP.

The BC NDP has also pushed ahead with the ruinous Site C dam, and more than doubled oil and gas subsidies since taking power in 2017. Meanwhile, Alberta NDP leader Rachel Notley is an aggressive supporter of the Trans Mountain pipeline and oil tanker project.

This gives Singh a very narrow runway to try to land the message that he is more committed on environmental issues than Trudeau – without contradicting Canada’s only NDP premier.

The Liberals are stepping into this vacuum with a fresh batch of election promises and more feel-good green branding.

$50 million for old growth protection (peanuts, but more than their opponents can promise). A ban by 2030 on thermal coal exports (another issue the BC NDP won’t touch, because of their ties to the longshore union and Pattison-owned Westshore terminals).

Trudeau also promised this week to ratchet down emissions for oil and gas companies starting in 2025 as part of his plan to get Canada to “net zero” emissions by mid-century.

That’s not how the oil companies interpret it. They plan to keep growing production, while betting on unproven carbon capture technology – and emissions offset schemes – to “balance” their ever-rising carbon output.

But this is politics.

Trudeau knows the climate emergency is top of mind for Canadians this summer, and his platform needs to reassure those voters that he’s on top of it.

In fact, the Angus Reid Institute found in a survey last week that climate is the number one ballot box issue in the country, despite a lack of media coverage in the election.

This shift is being driven by voters in B.C., Ontario and Quebec – especially people under the age of 35, who are freaked out by the prospect of decades of deadly heat waves, megafires, drought and worse.

The Angus Reid poll asked voters who listed climate as their top ballot box issue who they were planning to vote for. 41 per cent said the Liberals. 36 per cent said NDP. The Bloc picked up 11 per cent, with the Greens and Conservatives tied at 6 per cent apiece.

That suggests the Liberals’ pitch is working.

A clear wedge for the NDP

The NDP platform contains more ambitious emissions targets than the Liberals, and a promise to eliminate all federal fossil fuel subsidies.

But nothing symbolizes the Liberal betrayal on climate change more than the fact they bought a pipeline. And nothing shows the hollowness of their faraway “net zero” promises like the Trans Mountain expansion.

Just 30 per cent built, it has already gobbled up billions that could have gone to affordable housing, transit, clean energy, you name it. The final price tag is likely to be at least $20 billion.

“This pipeline is nothing short of genocide against my people,” wrote 22-year-old Kayah George of the Tsleil-Waututh Nation in a powerful op-ed this week in the Toronto Star.

Today the leader of the @NDP came a big step closer to pledging to scrap the #TransMountain pipeline and oil tanker expansion project, which is less than 30 per cent built. Here's exactly what @theJagmeetSingh said. #cdnpoli #Elxn44 pic.twitter.com/JlNrmRBekV

On the campaign trail, Jagmeet Singh has reiterated his opposition to the Trans Mountain purchase. But the NDP leader still won’t say if he would actually cancel the expansion pipeline.

From the perspective of climate science, Indigenous rights and even economics, scrapping TMX is the right thing to do. Singh needs to find the courage to say that, if he wants to stand out amid a wave of Liberal climate announcements.

Wherever the party leaders land, pushing the next government into climate emergency mode will take heroic efforts by local MPs and grassroots supporters.

There are a few candidates in this election who have shown a refreshing willingness to buck the party line. For example, Toronto Liberal Julie Dzerowicz says we should scrap Trans Mountain, even though her boss says the opposite.

NDP candidates Anjali Appadurai, Avi Lewis and others have come out publicly in favour of cancelling Trans Mountain, as have dozens of Greens. Later this week we’ll share a tool that makes it easy to contact your local candidates and find out where they stand.

Ultimately we need 170 out of 338 MPs who are willing to make Trans Mountain the turning point towards ending fossil fuel expansion, and who will vote for much more rapid and ambitious climate legislation. That will take MPs from multiple parties.

Unnecessary, sure. Ill-timed, perhaps. But this election is an important opportunity to put some committed activists in parliament and grow a “climate emergency caucus” at the federal level.

There are three weeks left until election day. If you’re ready to ramp up the grassroots pressure on local candidates, and force the climate emergency into the campaign, contact one of our local volunteer teams and we’ll get you going right away.