Sitting in a Burnaby hotel ballroom this week across from three sheepish federal pipeline panelists, I couldn’t help but remember a conversation I had with Justin Trudeau one year ago. “All I want to know,” I asked at a campaign stop, “is does your NEB overhaul apply to Kinder Morgan?”

The future Prime Minister didn’t hesitate. “Yes. Yes. Yes. It applies to existing projects, existing pipelines as well,” Trudeau said to me. “Okay, so if they approve Kinder Morgan in January, you’re saying –”

“No, they’re not going to approve it in January,” he said, referring to the National Energy Board’s original timeline. “Because we’re going to change the government. And that process needs to be redone.”

He was right about the election. But the NEB gave the thumbs-up to Kinder Morgan anyway (albeit four months late due to a conflict of interest scandal). And the “supplemental review” underway in Burnaby falls woefully short of a redo.

Following rules laid out by Stephen Harper, the new cabinet has until December to approve or reject the project. But if Trudeau issues permits on the basis of the slapdash assessment process so far, he won’t just face lawsuits from First Nations — he’ll be betraying a written promise to British Columbians.

In case their leader’s position was in any way unclear, Liberal party officials sent me a follow-up letter, which I am sharing publicly for the first time. “Dear Mr. Nagata,” begins the letter, signed by president Anna Gainey and dated October 5, 2015 — just two weeks before Trudeau won a majority government.

“Thank you for writing regarding the Liberal Party of Canada’s position on the Kinder Morgan Pipeline. As you are aware, Justin Trudeau and the Liberal Party of Canada have serious concerns with the process surrounding the approval of this pipeline. We cannot support the pipeline in its current form because the Conservatives have not ensured environmental, community or stakeholder consent.”

Then a line that we heard countless times on the campaign trail: “We agree with what you, and Canadians across the country, have been saying for a long time: Canada’s environmental assessment process is broken.”


The document is full of copied-and-pasted platform commitments, none of which, strictly speaking, have come true:

It’s the final point that brought me to the ballroom of the Hilton Metrotown, to participate in an “Environmental NGO roundtable” hosted by the federal government’s new Kinder Morgan panel. This is the extent to which Natural Resources minister Jim Carr has been willing to go to remedy the many shortcomings of the NEB review.

Panel chair Kim Baird is an oil & gas lobbyist who once signed a partnership agreement with Kinder Morgan, went on an executive exchange with the CEO and later shared staff. But that’s not conflict of interest, says Carr’s ministry. “We must have confidence in our system,” insists Environment Minister Catherine McKenna. And so I went. 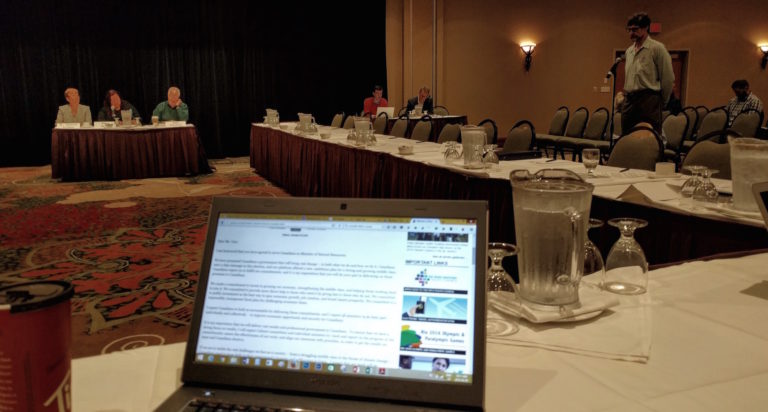 My first question to the panel was how the day’s discussion would be made available to the public. With no video livestream, no recordings, no stenographer, translators or public repository for documents, the new panel is even less equipped than the NEB, which at least pretends to function like a court of law.

Baird had no answer, other than to suggest that notes might be typed up and posted to the ministry’s website at some future date.

The scheduled speakers in the “roundtable” comprised two streamkeeper groups plus Resource Works, a pro-pipeline industry group. That was all, until I put my name on the list to speak. How were the participants selected? I asked. It turned out they had emailed the panel requesting a spot. It’s not clear if any invites were sent out.

Where can the public see the list of participants? I asked. Again it was suggested that such information might be posted online later.

How will you test contradictory evidence, I asked, and how will you weigh different types of evidence in your final report? We’re deciding that as we go along, came the answer. So it’s a black box? We’re really just here to relay people’s concerns to the minister, said Baird.

How then, I asked, do you plan to read everything before your fall deadline? 15,000 people so far have filled out an online questionnaire. Intervenors are submitting documents by email comprising hundreds of pages of scientific evidence rejected by the NEB. Are there enough hours in the day? No answer.

“I’ve never been more frustrated in my life,” said one onlooker afterward. “What a joke,” said another.

Consultation has not begun

The conclusion I am forced to draw is that this “redo” is nothing more than a political barometer for the government. With no investigative powers, scientific expertise or resources to speak of, the panel members sit mutely in their chairs and jot down a few half-hearted notes as people plead with them from the microphones. At the end, their report goes into a top hat and — poof! — the minister pulls out a yes or a no.

That’s not a public infrastructure review worthy of a G7 nation like Canada. Real consultation requires that people understand the terms of inquiry, and trust that the process is inherently fair. In other words, public consultation on Kinder Morgan has not yet begun. What the government will learn in December is that approving a massive oil tanker project on the basis of this empty pantomime is a quick way to end the Trudeau honeymoon in B.C.

I’ll leave you with these words from the Mayor of Burnaby, Derek Corrigan.