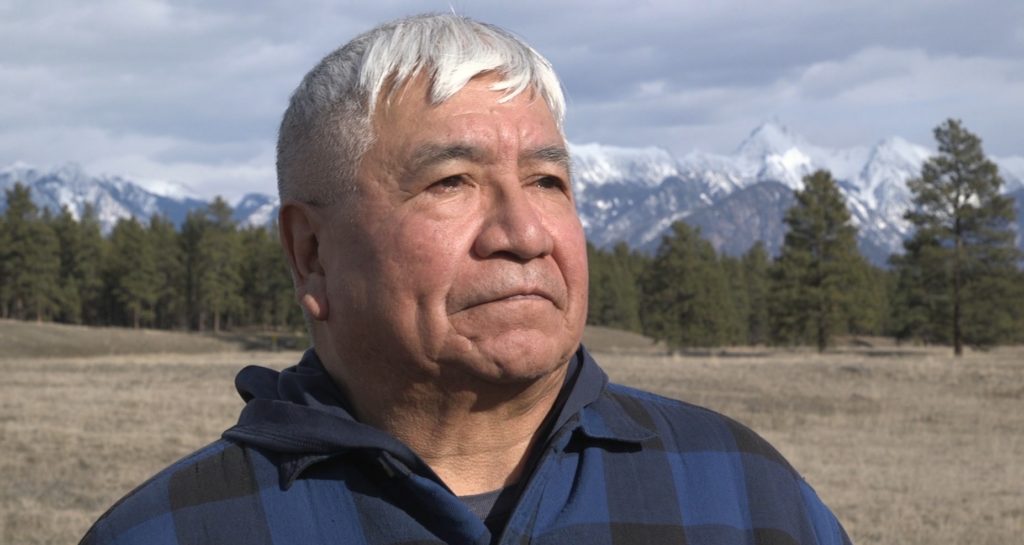 In Ktunaxa territory, the future is bright

Massive solar project in the Kootenays could light the way to a made-in-B.C. Green New Deal

As viral outbreaks and wavering stock markets add to the threat of climate breakdown, it feels like we’re edging closer to the type of crisis last seen during the Great Depression or World War II. Many are calling for the type of intervention – a ‘New Deal’ or a ‘wartime effort’ – that governments used to combat last century’s catastrophes.

B.C. is home to shovel-ready projects that could cut emissions, strengthen local communities and restore some of the power and self-determination of Indigenous peoples. What’s lacking so far is political will.

On the edge of the Rockies, in the headwaters of the Columbia River, a huge 26-megawatt solar proposal in the Ktunaxa community of ʔaq̓am represents a fork in the road. The story of this project, and its champion Marty Williams, are intertwined with the big decisions we’ve made around energy and our environment in the past half-century.

This is the sunniest place in B.C. Here the government could begin to right past mistakes. A simple contract with BC Hydro would transform life in ʔaq̓am. It might even set us on a path to a made-in-B.C. Green New Deal. But so far the answer from bureaucrats is a resounding “no”. We will not buy the power, so the project can’t proceed.

In 1934 construction began on the Grand Coulee dam – a signature project of President Franklin D. Roosevelt‘s New Deal. The New Deal was a bold and decisive government intervention to restart an economy crippled by the Great Depression. Completed in 1942, the dam across the Columbia River was a triumph of social democratic will – and a culture-creating moment in Pacific Northwest history.

From this point forward the Cascadia region would stand apart from North America. As newly built aluminum factories churned out planes for the war effort, and reservoirs channelled water toward farms up and down the Columbia Valley, it probably felt as though society had stared down poverty for the last time.

However, as one Great Depression ended, another intensified.

As a child growing up on the St. Mary’s Indian Reserve, Marty heard the stories of buffalo that his people hunted only two generations earlier. Now called ʔaq̓am, the community sits just outside Cranbrook B.C. ʔaq̓am is part of the Ktunaxa Nation, whose homeland is the mountain fortress we call the East Kootenays.

Marty’s elders could also count on the annual migration of Pacific salmon. But this wealth of food, and the power it brought the Ktunaxa, was cut off by massive dams on the Columbia River. 1938 was the last time people of the St. Mary’s Indian Reserve could fish for the salmon that migrated into the upper Columbia watershed, including 100-pound chinook.

“There is no amount of money that could compensate us for the loss of the salmon,” Marty says. “It was a huge part of our diet and our economy. We used to trade it across the mountains with the Blackfeet and the Bloods. After they built the Grand Coulee we lost our cultural sites, our fish camps, our hunting camps, we lost the migration of Elk that used to come through what is now the Kookanusa valley.”

B.C. soon joined this hydroelectric gold rush. By 1974 the dams and reservoirs agreed to under the terms of the 1964 Columbia River Treaty were complete. While the Pacific Northwest became an energy powerhouse, the Ktunaxa endured enormous loss. With the bison exterminated, salmon cut off and valleys flooded, Marty remembers his family confined to their postage stamp-sized reserve, scavenging for food.

Perhaps Depression is not a strong enough word. 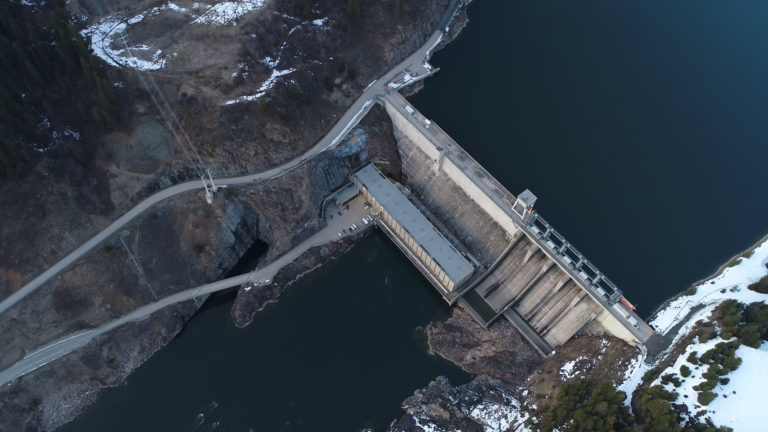 The new power needed to end the oil age

Today, the plains of the East Kootenays are still blessed with a valuable natural resource. The area around ʔaq̓am and Cranbrook receives more sun than any other place in the province: 2,205 hours a year. And the Ktunaxa are still here. Combining his elders’ lessons and worldview with his research on solar technology, Marty Williams hatched a plan to literally bring power back to his people.

The rest of us are beginning to realize that as we electrify transportation and home heating across the province, we’ll need far more emissions-free power than BC Hydro is currently able to generate. Twice as much, according to the latest UVic study. Fortunately the cost of local renewable power generation is falling, especially solar.

Why not buy that new electricity from Indigenous communities? An Electricity Purchase Agreement from BC Hydro would never replace what people in ʔaq̓am were forced to sacrifice. But it might signal that the government is serious about reconciliation. And that 26 megawatts of power would provide fossil-free power to about 5,000 homes.

It would also offset the astronomical hydro bills people pay to heat their homes all winter on reserve. Construction could offer employment and training opportunities to local trades workers and youth. And revenue from the solar farm, once operational, could help fund the community’s other priorities, including an ambitious education program. 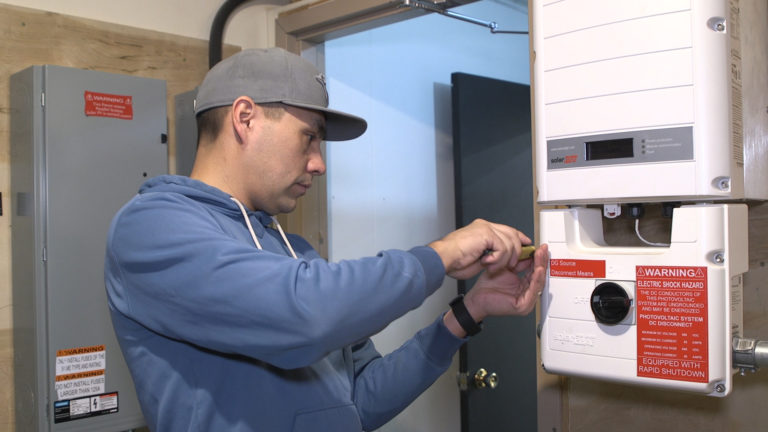 Partnerships should step forward, not back

Marty started building the idea for the ʔaq̓am solar farm 10 years ago. He found a company, Tucson Electric, with the experience to build the scale of facility he imagined. Later, when the company was purchased by Fortis, he helped arrange for community members to travel down south to visit their installations. Then they sat down with the utility to work out an agreement in principle.

The project has investment lined up, a construction partner and strong community support. ʔaq̓am conducted wildlife and archeological surveys on the 200 acres of reserve land selected for the solar facility. But even though their transmission lines transect the site, BC Hydro refuses to play ball.

In 2017, the top energy bureaucrat in B.C. visited ʔaq̓am. Dave Nikolejsin, Deputy Minister of Energy, Mines and Petroleum Resources, drove out to the site. According to Marty, Nikolejsin agreed it was a great location for a solar facility. But rather than sell to BC Hydro, he suggested the community become “your own best customers,” by hooking up solar panels to the casino.

Meanwhile, the power lines above hummed with electricity generated on flooded Ktunaxa territory, sold by BC Hydro to out-of-province customers for a profit.

BC Hydro transmission lines cut across the “Kootenay Indian Reserve”.

All of us know how it feels to face setbacks. However, few of us have any idea what it’s like to be pushed off our land. Or to see the source of our prosperity and culture disappear within a couple of generations. Or have power lines strung across our neighbourhoods after the rivers were dammed and valleys flooded. Or have the lights go out because you can’t afford to buy the very power that’s literally generated at your people’s expense. All of those things have been true for the Ktunaxa.

I know what I would have done because I simply don’t have the patience or determination. Marty said goodbye to the Hydro bureaucrats, put his head down and asked himself what the hell would it take to get the ʔaq̓am solar project built? As the incoming NDP government cancelled the standing offer program, First Nations across B.C. with clean energy projects on the drawing board were asking the same thing.

Made-in-B.C. solutions that create jobs, cut emissions, make our grid more resilient, and create opportunities for people who were left out the last time we transformed our economy are sitting on the desks of communities all over this province. They’re waiting for a ‘Yes’ from governments that have done more talking about the climate crisis then taking it seriously.

When construction starts on ʔaq̓am solar it will employ workers displaced by our pine beetle-ravaged forestry sector. It will help train a new generation of skilled workers and demonstrate not only that we have all the technology we need, but that it can be affordably deployed. Importantly, like projects already built by T’Sou-ke, Kanaka Bar, Taku River Tlingit or the Tŝilhqot’in National Government, it will be a source of immense pride.

What sets the ʔaq̓am project apart is its scale: more than 20 times the size of the largest completed solar farm in B.C. The Ktunaxa are uniquely poised to demonstrate how local power can reset relationships not only between people and big energy, but people and democracy.

When built, it will help unleash a wave of clean power projects waiting in the wings that will create jobs and the new affordable clean power to help this province decarbonize. And that could help one of Marty’s other projects. “We’re trying to work with the governments in Canada and the USA to re-introduce salmon to the upper Columbia,” he says. A region-wide clean energy revolution would open the door to taking down a dam or two, so Chinook can find their way home to Ktunaxa people once again.

16 Responses to “In Ktunaxa territory, the future is bright”