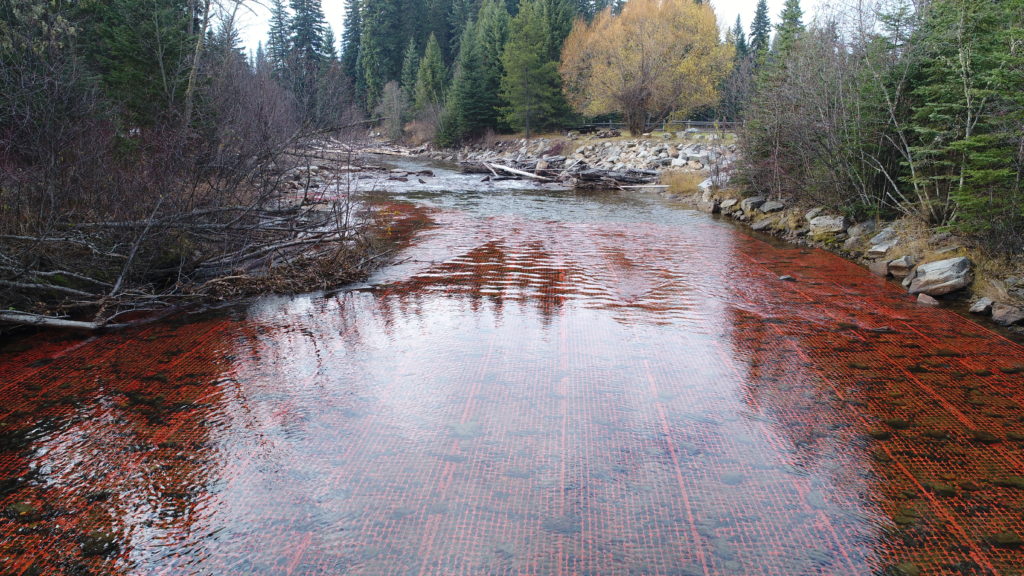 VALEMOUNT — Large mats made of orange plastic snow fencing are still blocking key salmon spawning streams along the proposed Trans Mountain pipeline route, more than a month after the National Energy Board warned the company it was breaking the law.

Kinder Morgan started construction work without permits over the summer, blocking Chinook and Coho salmon, Kokanee, Steelhead, trout and other species from laying eggs in streams where the company hopes to dig trenches across sensitive spawning beds next spring.

“If I got caught throwing a shopping cart or dumping motor oil in one of these creeks, I would face charges for tampering with salmon habitat,” said Sophie Harrison of Dogwood. “Why does a Texas pipeline company think it’s above the law?”

The NEB was unaware of the issue until researcher Lynn Perrin noticed a blog post on the Trans Mountain website, touting the “innovative use of a well-known landscaping product […] easily pinned down with sections of rebar driven into the streambed”. Perrin, who volunteers with the PIPE UP Network in Abbotsford, raised the alarm.

After conservation groups and fisheries biologists complained to the NEB, the board ordered Kinder Morgan to halt its plans to install the anti-spawning mats in 26 streams across B.C. However, the company still refuses to remove the snow fencing from eight streams where it has already been installed.

“I’ve submitted a formal complaint to the province’s Forest and Land Compliance and Enforcement Branch,” said Perrin. “If the NEB won’t enforce the law, I would like our B.C. Conservation Officers to remove this garbage from our salmon streams, and prevent Kinder Morgan from tampering with any more fish habitat.”

Dogwood and PIPE UP are calling on conservation groups, recreational anglers, First Nations and ordinary citizens to keep an eye out for illegal construction activity on the Kinder Morgan route.

“The fact is, this pipeline is still before the courts. The final routing is far from being approved. Kinder Morgan has no business starting construction without permits, especially not when it puts salmon at risk,” said Harrison.

Link to video footage and photos of Swift Creek in Valemount B.C.